Anyone who saw the episode of New Girl when Prince appeared out of nowhere, seemingly straight from the heavens, knows what a big moment it was. Prince didn’t do cameos. He didn’t just pop up on T.V. shows. That just wasn’t part of his shtick.

On a recent episode of Conan, our very own Zooey Deschanel opened up about how exciting and sort of bizarre it was that Prince chose to come on New Girl. “He spent a lifetime cultivating mystique,” she told Conan, so it was a huge surprise when his people contacted her to say he was a huge fan of the show. She said she never would have pegged Prince as a New Girl fan.

“Obviously, a huge compliment,” Zooey says, “I was floored.” Next thing you know, Prince is planning to come on set and perform a cameo. 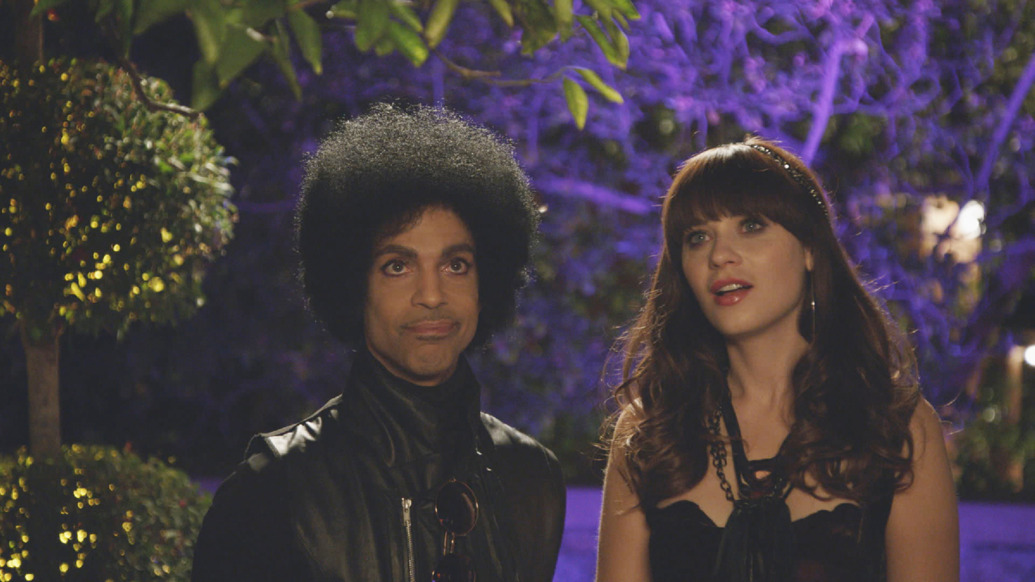 Zooey also told Conan about Prince’s strange requests. Even though he was only going to show himself for a few minutes on camera, “Prince was running the show,” Zoeey affectionately jokes.

Apparently, as Zooey was studying her lines for the scene, a person who worked for Prince started grabbing all the call sheets and scripts, then proceeded to throw them in a bonfire. Zooey recalls, “Someone from Prince’s camp said, ‘Who are the celebrities? I hope it’s not a Kardashian.’”

Upon finding out that there were, in fact, a couple Kardashians lined up to make a celebrity appearance — Zooey said Khloe and Kris were kind enough to make a quick cameo — Prince’s people did everything they could to destroy any evidence that they were going to be there. Zooey said they tried to usher out the Kardashians before Prince arrived so no paths would be crossed.

We can’t help but giggle at these antics. Remember when Prince kicked Kim off the stage at one of his concerts? Watching it, you can tell it wasn’t done mean spiritedly. It’s just that, well, he’s Prince. And if he wanted things done a certain way, he sure as hell got it done.

Everyone clearly misses Prince so much. After his death, celebrities who knew the artist stepped up to share all the quirky, endearing, wonderful experiences they’ve had with Prince — from the time Kesha broke into his house, to the moment when Gabrielle Union offered to share some of her tuna casserole with him. While Prince may be gone, his legacy (and his stories!) will live on forever. Including his time spent on the “New Girl” set.