You can’t think of the shenanigans that went down at Pacific Coast Academy during Zoey 101 and not immediately remember the eccentric and hilarious Stacey Dillsen (played by Abby Wilde). But the show didn’t originally write a large role for the cotton-swab-loving student, at least that’s what Abby said during a recent interview with MTV.

She was brought in for a role originally titled “Weird Girl” and only had three lines. But she was so hysterical with those three lines that they brought her back for another episode. And she had a few more lines that episode and then Stacey was born.

And thank goodness because we can’t imagine a world without this song and dance about sassafrass tea.

And on the subject of sassafras tea, Abby points out that Stacey’s love of it says more about her than we might have thought. “You know, I read somewhere—and this might not be true—I think I read somewhere that sassafras tea is poisonous in high doses, and if that is true, I think that makes Stacey kind of a badass, so I’m very proud,” she told MTV.

Stacey Dillsen would continue to be such a popular character (not in the traditional sense but, you know what I mean) that she was featured in the later Nickelodeon show iCarly and even has a cameo in Sam and Cat.

Abby jokes that Stacey probably went on after Zoey 101 to open her own cotton-swab-based Etsy store or maybe is involved in some sort of Breaking Bad-style swab black market. 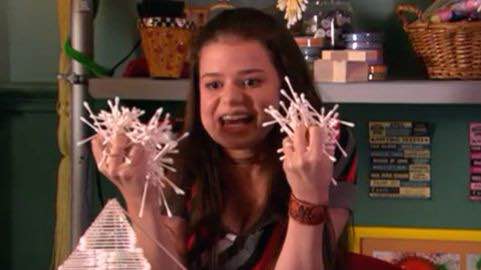 Of course Leave it to Abby to keep making us laugh at Stacey’s antics even after all these years off-the-air.