“What you are about to see is real. We shot this in zero gravity, in an actual plane, in the sky. There are no wires or green screens.”

So reads the beginning of the brand new OK Go video for “Upside Down & Inside Out” that was just released today. Because, well, it’s OK Go. They’re known for creating seemingly impossible music videos so jam-packed with creativity that they’ll blow your mind; take, for example, the treadmill dance routine for “Here It Goes Again,” or the wild umbrella show for “I Won’t Let You Down,” or the unbelievable Rube Goldberg Machine in “This Too Shall Pass.” Now, they’ve done it again. . . and they’ve taken it a step further with zero gravity.

The video starts with the band sitting in plane seats. . . only to unbuckle and let all the chaos loose. Flight attendants fly through the air! Disco balls float around the cabin! Even paint gets involved, and it’s a pretty fabulous thing to watch. 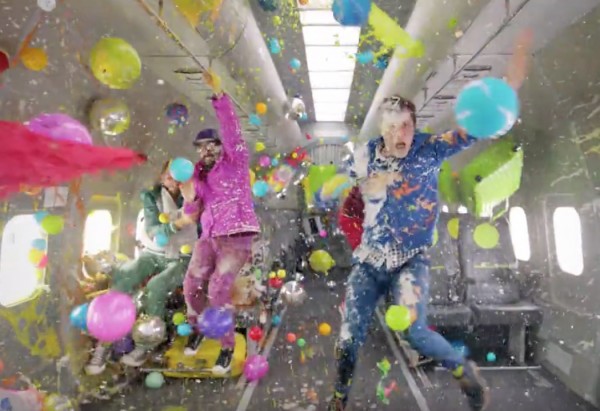 As if they knew we’d all be like, “HOW?! WHAT?! TELL US EVERYTHING!”, the band posted an FAQ on their website about the new video, explaining that it was shot in an airplane “that flies parabolic maneuvers to provide brief periods of weightlessness, sometimes referred to as or ‘zero gravity’ or ‘zero g.’” Zero gravity is only possible for 27 seconds at a time, after which the plane needs five minutes to recover, so although the video is single shot, there was time taken out to make it possible. And because OK Go knows we’re curious science geeks, they even told us where to watch out for these moments in the video, when gravity briefly returns: 0:46, 1:06, 1:27, 1:48, 2:09, 2:30, and 2:50.

The video was shot just east of Moscow at the Russian Space Agency, and although it took months to set up the video, the band was on site near the Cosmonaut Training Center for three weeks. “For the first week we did test flights to figure out which ideas would work and which wouldn’t,” the band wrote on their site. “How hard is it to control yourself? If you do a really cool flip once, can you repeat it? What looks cooler in zero gravity: a chain of a string of beads? Toothpaste or a shaken can of soda? How hard is it to place place a tablet in the air and just have it stay still? By the second week, we’d chosen our favorite ideas; we had our bag of tricks, and we assembled them into a routine and rehearsed it. The third week was proper shooting, we just ran the routine 8 times over 8 flights.”

And, as always, their hard work paid off, and we’ll be watching this video on repeat for weeks. Check it out below and see for yourself.