It goes without saying that Zendaya is one of our favorite style icons. The former Disney Channel star, body confidence advocate, and red carpet queen has provided us with many looks over the years we can’t stop swooning over. The 22-year-old entertainer knows no limits when it comes to fashion.

Alongside her amazing stylist Law Roach, Zendaya is continuously breaking boundaries and fashion rules to the point where we question if these rules actually exist. Choosing Zendaya’s best looks over the years is quite a difficult task, but someone had to do it. From elegant gowns to color-blocked suits, here are some of our favorite looks that Zendaya has provided us over the years.

Zendaya is fresh on the music scene and starting her Swag It Out Tour. At the time, Zendaya was still a sweet teenage girl with a slightly boyish flare, and her style reflected that. 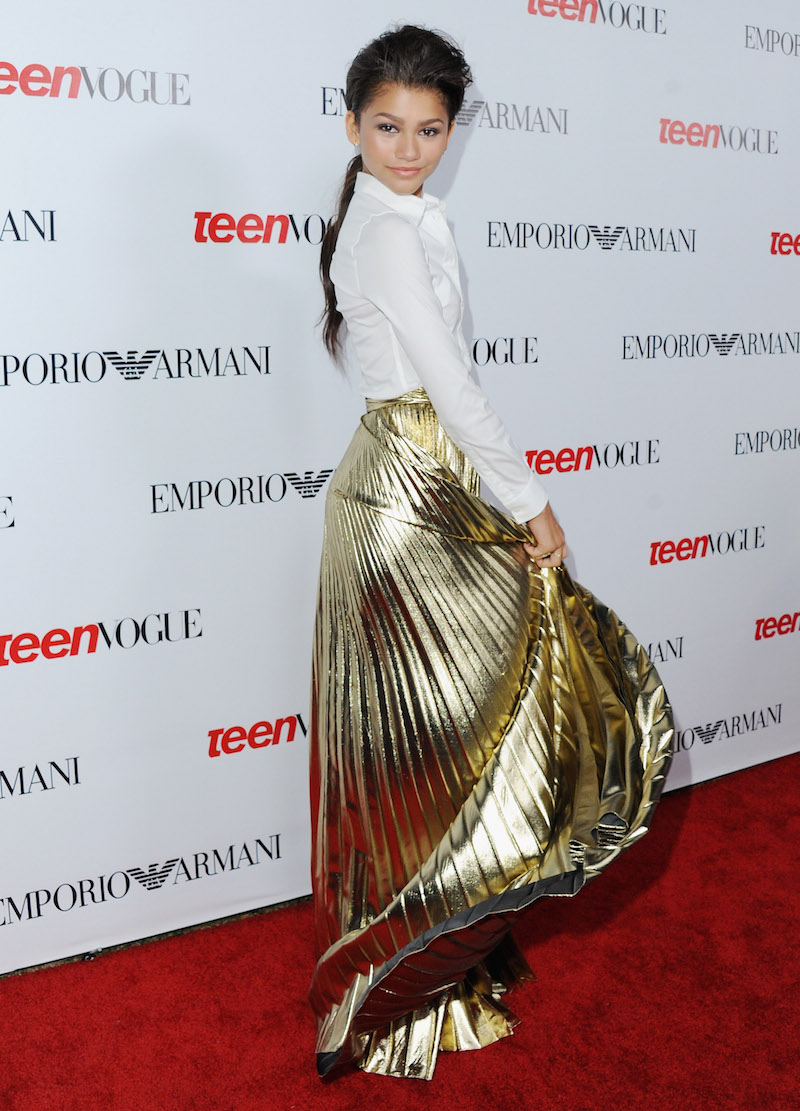 Zendaya hits the red carpet for Teen Vogue Young Hollywood and practically looks like she grew up overnight. The messy but cute updo and exaggerated metallic skirt was just the beginning of many red carpet slays for Zendaya.

For the 2012 American Music Awards, Zendaya spiced up her red carpet look up a notch with this black and nude number. This look was a bit flirty, but still age-appropriate glam at its best.

At the Radio Disney Music Awards, we see Zendaya stepping a little bit out of her comfort zone, sporting a matchy short-suit and heels.

Zendaya gave us Babygirl vibes on the Dream Halloween red carpet, shortly before the release of the late singer Aaliyah’s biopic on Lifetime. She did not play Aaliyah, but we’ll take an homage to her anytime.

Law and Zendaya do it again at the 2013 American Music Awards with this all-white number. The silver accessories and shoes paired with her long, bone-straight hair made Zendaya look absolutely heavenly walking the red carpet.

During the Winter 2014 New York Fashion Week, Zendaya striked a pose for photographers sporting a chic color-blocked overcoat and Louboutin heels. The New York winter was no match for this super-hot look.

Another day, another New York Fashion Week slay. Zendaya pulled a 180 with this Jeremy Scott two-piece  and bobbed hair. 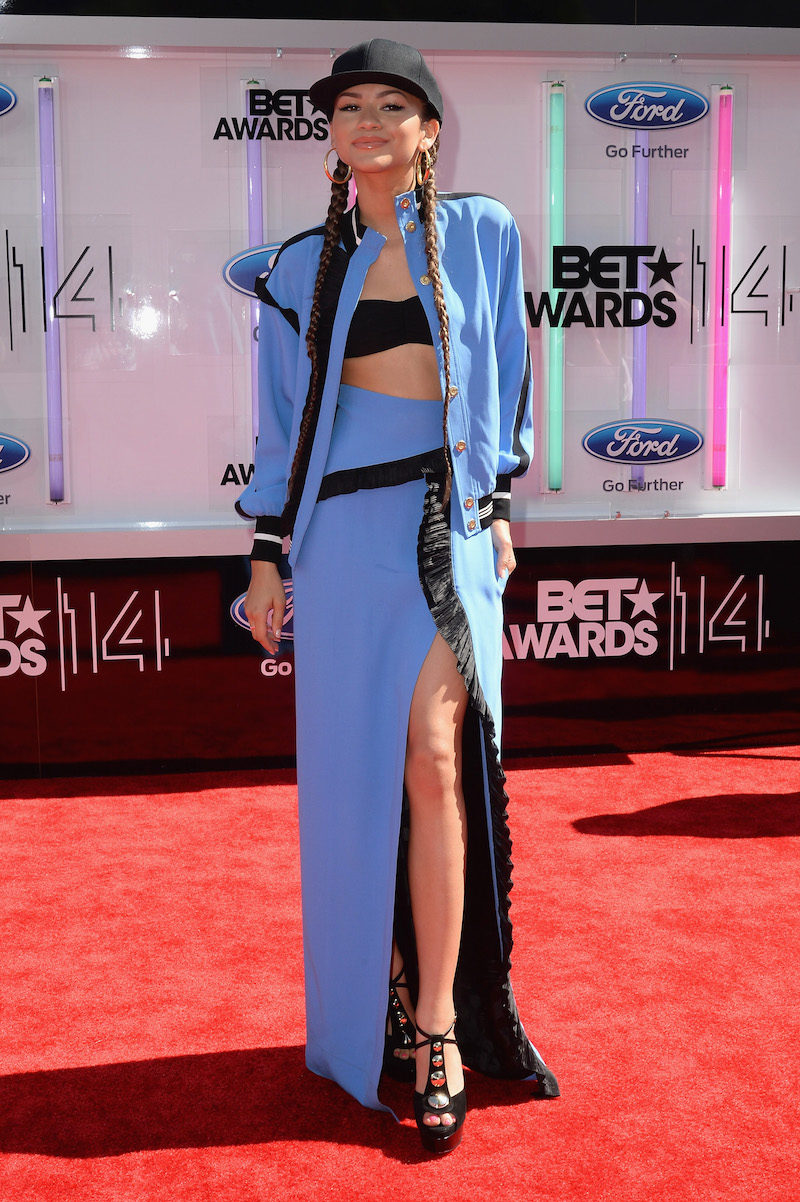 Early on, Zendaya mastered the tomboyish yet girly look, and at the 2014 BET Awards she gets back to her ways. Only she can pull off a jersey-inspired outfit with a fitted cap and heels, and make it fashion.

Zendaya hit the 2015 Grammys red carpet looking all grown up in this vertical striped, high-split number.  The hair alone deserves a post on its own.

Zendaya came through to her first Met Gala (the theme was “China: Through The Looking Glass”), and shut the place down. Her royal red, high-low number was easily one of the most memorable gowns of the night.

It takes a special kind of person to pair a satin slip dress with teal thigh-high boots and a diamond choker. At the 2017 Kid’s Choice Awards, Zendaya showed the world how it’s done. The best thing about this look was that the dress, from her clothing line Daya by Zendaya, was only $38.

The 2017 Met Gala’s Commes des Garcons Rei Kawakubo theme may have been the trickiest dress code yet, but Zendaya knocked it out of the park covered in parrots and sporting big voluptuous hair. Only Zendaya can make birds look this fashionable and do it so effortlessly.

Zendaya is no stranger to breaking rules when it comes to fashion and beauty, and her 2017 MTV Movie & TV Awards red carpet look is proof of that. She paired this lovely green gown with spot-on green eyeshadow from Covergirl, and the “don’t match your makeup to your outfit” rule was never spoken of again. 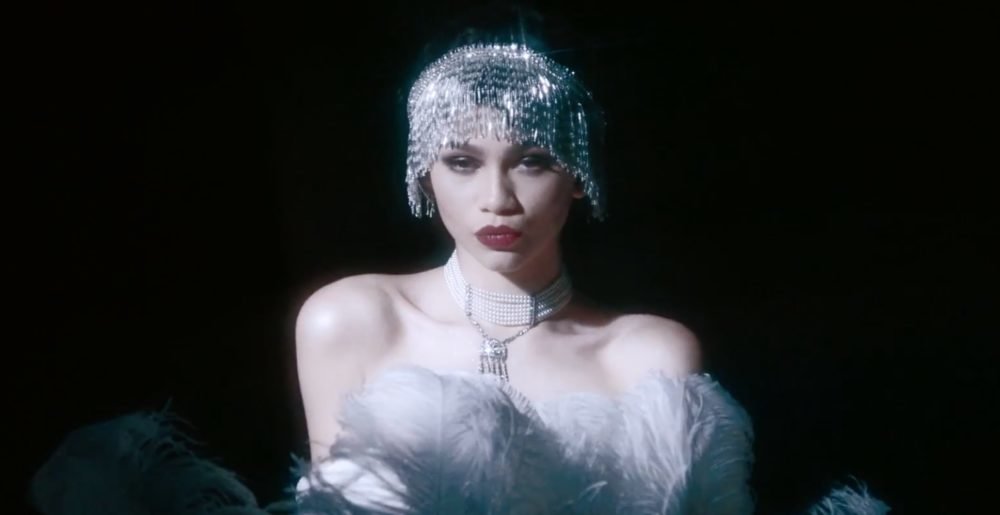 For this video with Vogue, Zendaya stepped in a beauty time machine and transformed through nine decades worth of beauty trends. From 1920s flapper to 1980s Diana Ross, she proved how much of a style chameleon she truly is.

Zendaya made us fall even more in love with the denim-on-denim trend when she rocked this head to toe look. This was put together with pieces from her fashion line, which we hope will be be back sooner rather than later.

Zendaya once again broke a “fashion don’t” by making exposed bra straps stylish at a Spiderman: Homecoming event. The horizontal striped Altuzarrashirt-dress paired with contrasting ruffle bra straps made us consider this bra strap trend ourselves.

At the premiere of the Spiderman Homecoming movie, she came dressed in a Barbie-pink Ralph & Russo dress.

Zendaya debuted this very simple outfit and looked ready to star as a leading lady in a ’90s R&B video. We love glam, but when one of our favorite celebs makes simplicity trendy, we are all here for it.

This ombré sequined Vivetta suit that Zendaya wore to the Variety’s Power of Young Hollywood event may have been one of our favorite looks to date. The best part of this look is that it gave old-school disco and futuristic vibes at the same time.

Obviously we can’t get enough of Zendaya’s throwback looks, and this 1600s Salem witch-vibe was definitely one of our favorites. While attending the Volez, Voguez, Voyagez Louis Vuitton exhibit event in New York, she rocked this ensemble from the LV collection showing just how much style transcends eras.

Coincidently on the day of the Golden Globe nomination, Zendaya dressed as a Golden Globe personified. While she kept her hair and makeup pretty simple, this gold Giuseppe di Morabito coat had her looking ready to hit up the most glamorous holiday party known to man.

For The Greatest Showman Australian premiere, Zendaya arrived in this Jeremy Scott for Moschino number literally dressed as a butterfly.

We can always count on Zendaya to make something that is “unfashionable” the most fashionable thing that we’ve ever seen. This red tracksuit paired with white pumps and a trench vest was a prime example of how much she could care less about the rules of fashion.

At the British Vogue’s London Fashion Week party, Zendaya rocked pinstripes like she had invented them herself. The bold, black-and-white Fatima Danielsson suit definitely made a statement.

Once again, Zendaya gave us a nice dose of nostalgia when she rocked this Marc Jacobs 1980s-inspired suit to a Vanity Fair party in LA. She kept her makeup minimal and topped off the look with a black fedora. Zendaya, is there anything that you can’t pull off?