Everything you need to know about Peach, the Internet’s new app obsession

If you saw that the word “Peach” was Twitter trending on Friday, and thought the Internet was really excited about the fruit being in season, think again. The Peach causing so much commotion is actually a new social media app, created by one of the co-founders of a little Indie project called Vine (you may have heard of it).

Peach brands itself as, “a fun, simple way to keep up with friends and be yourself.” Users create a profile and have the opportunity to update it as they please, kind of like Facebook but with less structure.

As news of the fresh app spread, some people said were down to try Peach.

While others mostly questioned why the world needs yet another social media app.

To be honest, Peach immediately sparked my interest when I saw the app’s website is peach.cool. Does this mean “com” is on its way out?

For the sake of research, I downloaded Peach and poked around. At first, I was greeted by my very sad, very empty profile. 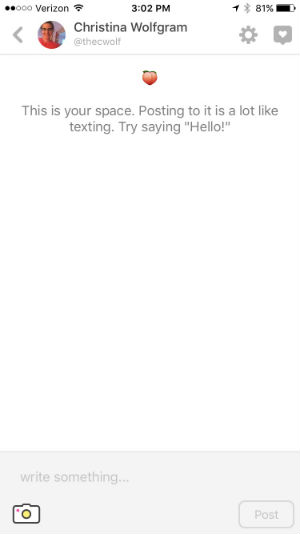 Peach told me that posting is a lot like texting, but tbh, it kind of felt like I’d be texting myself. Almost as though reading my thoughts, Peach sent me a series of directions, starting easily enough with “Try saying Hello.” Under the app’s direction, I posted a photo (of my cat because duh) and a GIF of Jeffrey Tambor yelling “Yasss Queen.” Things got interesting when Peach introduced me to its “magic words.” 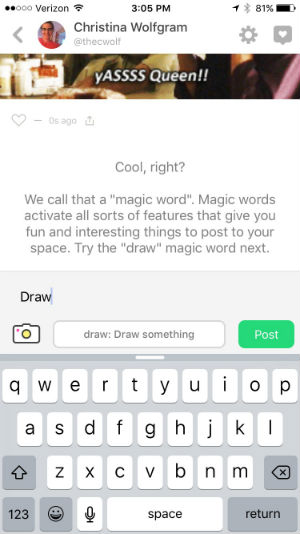 When I typed “draw,” a paint tool reminiscent of Snapchat’s — only with no pen color options — appeared. When I finished, my sloppy drawing got tacked to my hodge podge of a profile. Meh. Peach explained that there were more magic words where that came from. 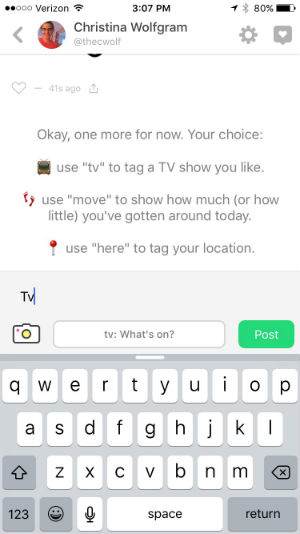 Running through the alphabet, I discovered that “w” posts the weather, “r” posts a star rating, and “b” posts the battery life on your phone, because apparently nothing is sacred anymore. Pressing on the cute ‘lil lightbulb prompts Peach to ask you a question. Mine was, “What talent do you wish you had?” I answered as honestly as I could. 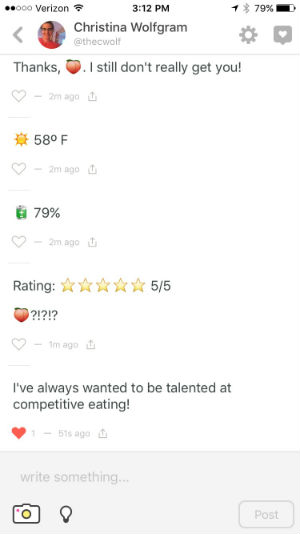 Peach got infinitely more fun once one of my friends added me to her “squad.” Remember when you used to be able to “poke” people on Facebook? Well, Peach has taken that concept to a new level. 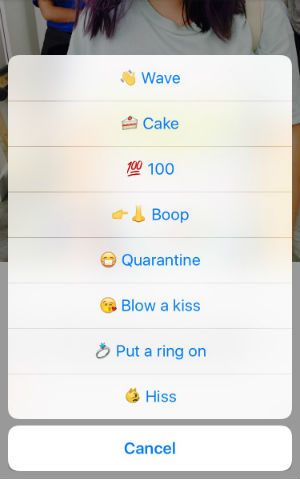 So many people were downloading Peach on Friday that the app could barely keep up and kept experiencing technical difficulties. Could this random app be the new Snapchat/Facebook/Instagram/Twitter/Yelp/GoogleMaps?

Guess we’ll just have to wait and find out.

(Images via peach.cool and Christina Wolfgram.)