The Han Solo breakup is getting super awkward, and we’re feeling secondhand embarrassment

Breakups can be rough, awkward, and weird, and sometimes they’re all of these things at once. Even worse, sometimes there’s a kid involved, and things can get real ugly real fast. If you need an example of this, look no further than what’s going on right now between Disney, Lucasfilm, and the Young Han Solo movie.

The kid in this situation is the Young Han Solo movie.

Late Tuesday afternoon it was announced that Phil Lord and Chris Miller — the duo behind such gems as The Lego Movie and 21 Jump Street – would be stepping away from the highly anticipated Star Wars standalone story focusing on a young, scruffy-looking nerf herder. Lord and Miller released a statement citing “creative differences,” and they also called that idea cliché, but in this case, it’s what’s happening. President of Lucasfilm, Kathleen Kennedy, released a statement as well, echoing this same sentiment. The directors just weren’t working and made the decision to depart.

And now, since the internet loves nothing more than some good Star Wars production drama (the Rogue One reshoots will forever be a highlight of my life), it took barely 10 minutes before more #drama started to emerge. This is a lot to process, so take your time, but here’s what went down. We feel so uncomfortable:

● Supposedly, there are only three more weeks left of shooting the Young Han Solo movie. The film’s been in production since February. Also to note: Lord and Miller have been attached to the movie for almost two years.

●According to sources, the two were actually fired. Variety reports that Kennedy clashed with Miller and Lord from day one, which ultimately led to their dismissal.

● According to /Film, the movie actually went on hiatus for a while, while Kennedy reviewed some of the footage, and she wasn’t pleased with what she saw. It was more “comedic” than what had been planned, and there was so much footage that no one knew what to do with it. The movie will have to go through some reshoots, but it’s unclear how extensive they will be.

● What’s happening *right now* with the movie is also unclear. Are they filming? Have they stopped? Your guess is as good as mine.

● While no new director has been announced, a few big names are floating around. The most prominent? Ron Howard. However, Howard is currently shooting another movie, and who knows if he’s even available, and willing, to jump in.

● Someone asked Ron Howard about this *today* and he declined to comment.

● There was mention that Lawrence Kasdan, a long-time Star Wars veteran who is already working on the movie, might direct the project, but there’s a weird clause in the Directors Guild that specifically states that he can’t; rather, someone completely removed from the project has to take it over, so no one currently working on Han Solo can take charge of finishing it.

● During a CineEurope presentation, where many big Disney movies were shown to the crowd, the two directors’ abrupt departure wasn’t even mentioned when the Han Solo movie was brought up, and that is the definition of awkward.

● Miller’s current Twitter page still looks like this, and he last tweeted nine days ago about Han Solo: 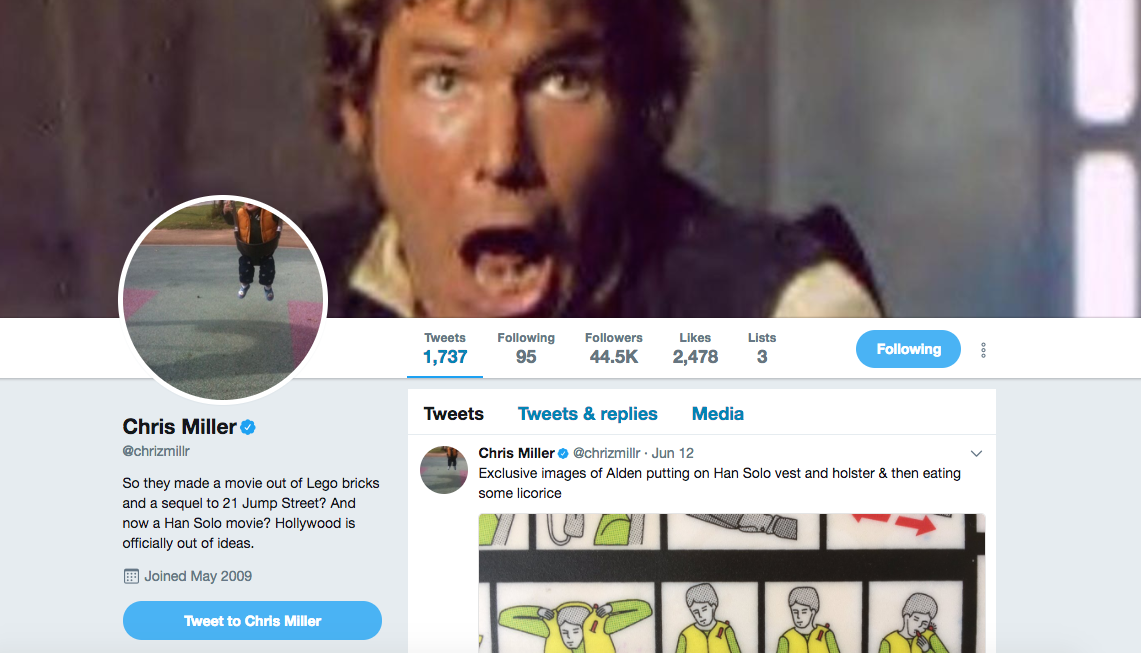 Aside from the statements released from Miller, Lord, and Kennedy, nothing else is remotely confirmed. There are a lot of rumors floating around, and so much more speculation.  If you’re as affected by this news as I am (AND I AM AFFECTED BY THIS A LOT), know that not everything you see is true. And we might never know the truth about what went down (remember those ~lost~ moments of Rogue One?).

Right now, the Young Han Solo movie still has an opening date of May 25th, 2018.