People understandably have a lot of feelings about birth control. Each hormonal version comes with its own potential risks and benefits, non-hormonal ones have their own possible complications, and the stigma against not using birth control, as well as the reality of unwanted pregnancy, are both very real.

In an effort to help further conversations about birth control (especially in the aftermath of the recent CDC warning regarding women who don’t take birth control), several HG staffers and friends are sharing their own experiences with birth control. From Nuva Rings to pills to good ole condoms, here’s what’s worked (and hasn’t) for us:

“The first birth control I tried was the Nuva Ring and — hoo boy! — did it suck. Not only did it never stay inside me, but the hormones in it made me so sick that I thought I had the flu. Luckily, the mini pill, which is progesterone only, works really well for me. So well, in fact, that I rarely get my period anymore, which is amazing and fabulous and means I can wear lots of dresses and thongs whenever I want.

However, not having a regular monthly bleed also means that I think I’m pregnant — all. the. time. To help with this anxiety, and to be extra safe, my boyfriend and I use condoms a lot. Condoms, to me, are the kind of birth control that require the most communication, and in a weird way, talking about using them (and then sticking to our decision) has brought us closer together. We’ve had fun trying every variety of condom under the sun and getting creative when we don’t want to use a condom but also don’t want to risk pregnancy. Oh, hi mom!” 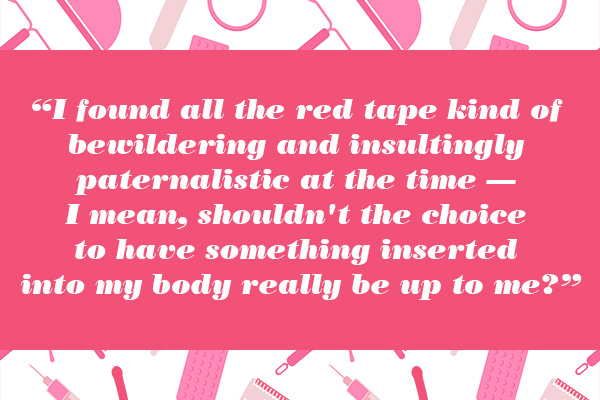 “Here are the things I did know: an IUD is a T-shaped Intra-Uterine Device that can prevent pregnancy for up to five years, depending on which kind you choose. Some types use hormones and others do not, but its effectiveness lies in a combination of a few different things. I was interested because I had gotten lazy about taking the pill. After a string of forgotten pill days, I was on the subway and found myself staring at an ad that said: ‘Maybe the IUD is right for you.’ I decided it might be time to listen.“

“I started using the pill about a year ago after my boyfriend and I had been together for a while. Everyone was telling me how it was the easiest and most effective form of birth control so I figured it was time for me to give it a try. On the package it says to take the pill at almost exactly the same time every day. And if you miss one you need to take it as soon as you realize you forgot.

First off, I am generally pretty lazy and forgetful so that was already a bit of a challenge for me. The first month was fine and it seemed to be working great. But that feeling of anticipation every month before I got my period didn’t go away. No matter what I did to prevent it, I would still worry something went wrong and that I would end up staring at a little pink plus sign by the end of the month.

It was towards the middle of the second month that things went awry. I started to forget taking my pills. I wouldn’t wake up at the same time everyday to take them at the right time and couldn’t seem to find a better time in the day where I wouldn’t forget to have them with me. So I had to ‘double up’ a few times. Every time I took two pills in one day I ended up puking my guts out. The amount of hormones I was taking were making me very nauseous. I couldn’t keep a glass of water down, let alone lunch. I ended up in the hospital a few times with an IV in my arm because of how dehydrated I would get from the whole experience. Now the pill was getting in the way of the things I needed to get done from day to day and I couldn’t even be sure it was going to work anymore. I just ended up using condoms on top of it all anyways.

It just didn’t seem worth it. I’ve tried to start taking it a few more times after my initial experience and it always ended the same way. If I had a more consistent schedule or better self discipline, maybe the pill would’ve been for me. But I don’t want the added stress when it causes more harm than good.” 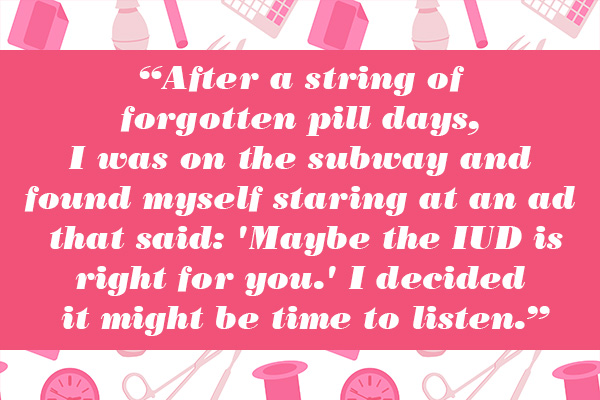 “When I was in high school, I wanted to surreptitiously get on the pill for my ~*sexual activity*~, but framed the convo to my doctor and mother as me searching for a way to ‘fix’ my acne. Well, I quite soon after broke up with the person I’d been seeing, and then because the Pill wasn’t doing anything for my skin, I dropped that and went BC- (and sex-)free for years.

After getting into a long-term relationship and having a pregnancy moment, I began to become debilitatingly paranoid about the possibility of becoming pregnant again. My partner and I had used condoms before, but as my fear had compounded, I spoke to my OB/GYN about potentially getting an IUD. However, since I also suffer from regular sad spirals right before my period, my doc instead suggested going on a low dose hormonal pill to help with that as well. The transition into this pill was rough — I spent a week struggling not to cry in public — but three months in, I like having more peace of mind regarding my period, and weirdly enough: My skin does seem to be getting better.“

“For birth control, I take Depo Provera, which is an injection I get four times a year (roughly once every three months). I landed on Depo Provera out of necessity. After years of an irregular but mostly-normal period, my uterus rebelled against me in 11th grade and my period became more erratic than ever, plus longer and heavier. I was bleeding about three weeks a month, although not all in one block (I’d have my period for several days, have a day or two of no bleeding, then start up again with no warning, on repeat), and becoming severely anemic.

Finally, my mom issued a decree: It was time to go to a gynecologist and get a handle on this. After more than a year of trying different versions of the Pill with little reaction from my rogue reproductive system, a gynecologist at my college’s clinic suggested Depo Provera, and it was a life-changer. Most women, my doctor explained, completely stop having periods within six months of starting the shot. I continued to have periods for another six years while on the shot — but it did help control my bleeding and get me out of the Anemia Woods. Eventually, I did stop having regular periods, which feels like a blessing after all the years of never knowing when (or, perhaps more importantly, where) my period would decide to start.” 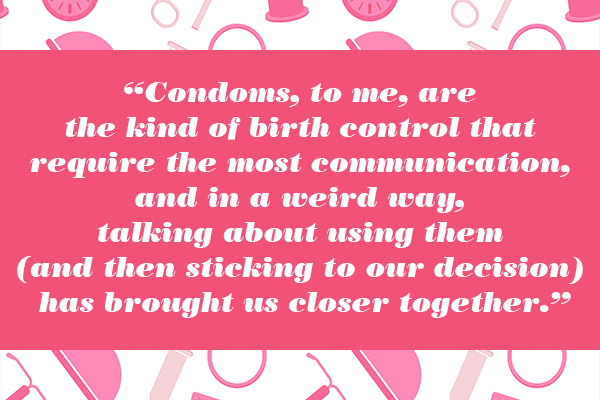 “I used to have horrible periods growing up so FINALLY, when I was like 19, I went to the OB/GYN to see if they could help me and recommend a BC.

So for about four years, I’ve been on the same pill, Portia, which I take once a day for three weeks and then don’t take it for a week so I can have my period. BC saved my life in terms of extreme pain, heavy bleeding, and not being able to function during my period which would last like five-seven days. Now I have very little pain (mostly only on the first day), very light bleeding (only heavier on the first/second day) and it really only lasts three days (Thursday-Saturday) at most before I take the pill for the next cycle (always starting on a Sunday).

BUT, over time I think it’s messing with my hormones and causing me to be much more sad, especially during the week before my period. I just remember that I used to feel physical pain, like my body was preparing for doom, but more and more I feel sad, lonely, and almost depressed during the week before my period. It doesn’t really stem from anything, and I feel like I can’t change it/that it’s getting worse. I might need to change pills (but I don’t want to risk weird side effects of another one). I also know you’re not supposed to be taking the same pill forever so… I don’t know. GOD SAVE THE QUEEN, THE END.”

“I got an IUD when I was 24, because the hormonal birth control pill I had been on in college gave me the kind of migraines that feel like you’re having a stroke. Besides, taking a pill at exactly the same time every day was not something I was great at, and the various insurance complications of being a freelance writer made it smarter and more cost-effective. I found the process of getting it quick and pretty easy, and I basically forgot about it for five years until last May, when I got it replaced with a new one.

I remember that getting an IUD the first time was a real battle — I went through many lectures by nurse practitioners telling me that if I got an STI with an IUD in, it could lead to more serious complications, including infertility. I found all the red tape kind of bewildering and insultingly paternalistic at the time — I mean, shouldn’t the choice to have something inserted into my body really be up to me? And wasn’t infertility kind of the point? No, I know. But still, come on. STI/STD risks existed with the pill, too.

The second time, maybe thanks to increased awareness of the IUD in the past half-decade, it was not a problem. My headaches have since gone away, but I would stick with it even if there was no noticeable effect in that department, just because having an IUD has made birth control basically a non-issue for the past six years or so. I still use condoms with a new partner, but babies are not something that I want for a while yet, so it’s nice not to have that be a worry.”