Five days ago, 25-year-old Talia Jane‘s name spread across the Internet. In a nutshell, here’s why: Talia wrote a letter to Yelp CEO Jeremy Stoppleman discussing the fact that some of his employees (including her) are living in poverty. About two hours later, the young woman was fired from Yelp. 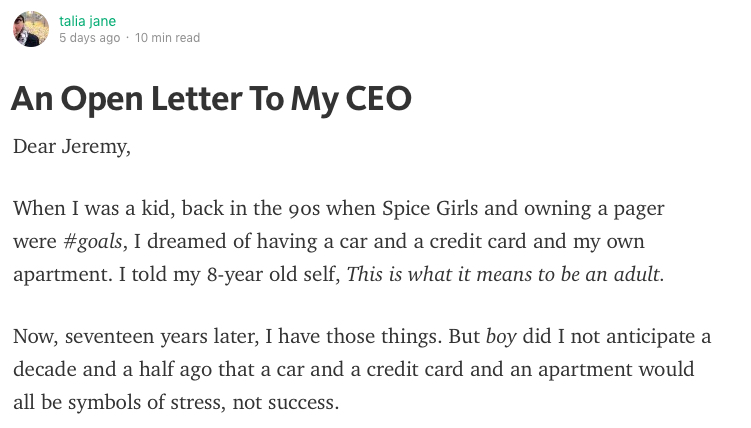 After posting this letter for the world to see, Talia received plenty of feedback – both negative and positive. But, ultimately, she started an important conversation about wages and how they relate to one’s quality of life:

“But turning this girl’s inability to work for what she wants into a conversation about poverty (Poverty! She lives in the Bay Area alone and has a corporate job and can afford fancy bourbon! Not exactly the picture of a third world crisis!) and wage issues, it’s utter b–.”

Even so, instead of retaliating (and inevitably continuing the Medium letter cycle), Talia came back with an unexpectedly positive response:

In the end, it would be great if this prompted both Talia and Stefanie to work together on this issue. Because two passionate, talented writers are better than one – especially when it comes to a topic as complex as poverty and wage disparity.