Woman nurses on TV and no one could even tell, making awesome point about normalizing breastfeeding

When New York-based writer and entrepreneur Rachel Sklar was asked to appear on CBC News Now, hosted by Andrew Nichols, to talk about the new Barbies with diverse body types, she had to balance a few things at once — like giving her expert opinion on matters relating to culture, media and gender while taking care of her 10-month-old daughter, Ruby.

“CBC emailed Thursday early afternoon and I was home with her with no childcare, so I said I could do it but that she’d be here,” Rachel told HelloGiggles. “. . . I told them if I couldn’t get her down for a nap I’d just nurse her out of frame.”

But alas, hungry babies will stop for no one, so Rachel nursed her. . . while live on the air for five full minutes. And until the last ten seconds, when a (precious) little baby hand enters the frame, it’s impossible to tell. *Maybe* that’s because breastfeeding in public isn’t the egregious, repulsive display that some make it out to be — it’s a natural, unoffensive, and unobtrusive way to nurture a child. So unobtrusive, in fact, that Rachel was able to nurse her child on the air for over four-and-a-half minutes, and no one noticed.

Rachel is used to juggling it all. The founder of TheLi.st — “a professional network for awesome women,” she tells us — is not only a single mom, but she is often on TV and has been a repeat guest on CBC since 2008, when she was a regular contributor during the campaign. “[CBC was] totally cool,” she told us. “[The breastfeeding] was a non-issue. . . I thought it went off without a hitch — I didn’t realize she’d reached up at the end until they told me after the segment. Her timing was perfect; she did it right when I was signing off. She wanted in on the action.” 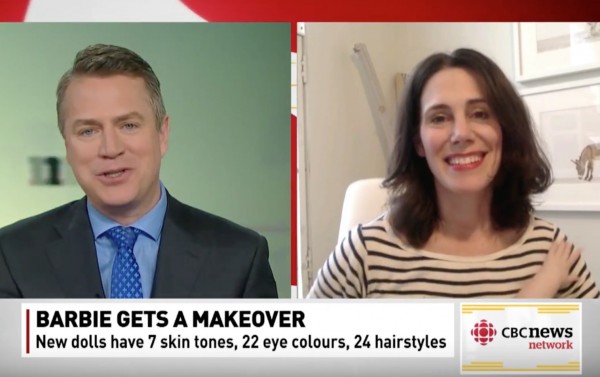 Since she posted the video on Twitter, it’s been retweeted hundreds of times, with “uniformly positive” responses. “[There have been] lots of virtual fist-bumps,” she told us. “New moms have lots to offer and many of them appreciated seeing that represented. . . I only saw positive feedback.” Rachel is “all for” the normalization of breastfeeding, and she often posts “brelfies” to contribute to the cause. “I find it bananas that there is any controversy around breastfeeding. It’s a completely natural phenomenon,” she told HG.

“My daughter came out and was like, ‘Nice to meet you, give me your boob.’ I have a very cute cover and I use it when I feed her in public. We’ve nursed in restaurants, at conferences, in stores, on planes, at business dinners, client meetings, in Central Park, you get the idea. We live life, and when my daughter is hungry, I feed her. From my boobs. Because I can. It’s wild.”

Rachel gives CBC full props for being so accepting and understanding about Ruby. “CBC is awesome,” she told us. “This was the third time I accepted an invitation to come on air with, ‘Yes, but there will be a baby in the room who might erupt in hollers at any time.’ I love so much that they have invited and re-invited me and [it’s] a non-factor.”

We are all for not only CBC‘s progressive and accepting nature, but Rachel’s kickass determination to normalize an incredibly beautiful and natural thing: Breastfeeding in public. But she does have one more message for all the moms out there. “[The video] was a nice tight shot — the chaos of the rest of the [apartment] was safely out of sight,” she adds. “Lest I present like I have it all under control. I do not! But I make it work.”

Check out Rachel’s awesome appearance below.