7 places where you can see the Northern Lights in 2019, because we know it’s on your bucket list

Now that the year is coming to a close, it’s a great time to start thinking about all the fun things you want to do and see in 2019. If you’re looking to do more traveling next year, planning a trip to see the Northern Lights (if you haven’t been lucky enough to do so already) is a definite must—the mesmerizing display of colors dancing across the night sky will change your perspective on life. If you’re looking to cross this item off your bucket list, why not do it sooner rather than later?

In fact, the best time to see the Northern Lights is right now. As Menghan Wang, co-founder of The Travel Brief, tells HelloGiggles, winter is the optimal time to catch the Aurora Borealis because only in wintertime do you get the completely dark night skies needed to see it.

If you’re trying to catch it in Iceland, which Wang says is one of the best places in the world to see the Northern Lights in 2019 or “any year for that matter,” it’s best to go between October and March. During the rest of the year, the sun never completely sets, so even if the lights were right above you, you may never get a chance to see them.

"One thing to keep in mind, however, is that no matter where in the world you are, catching the Northern Lights is never guaranteed because they depend on unpredictable solar activities," Wang says.

But there are ways to maximize your chances of seeing this spectacular show, and where you choose to see it is one of the most important decisions you’ll make.

Wang says that Iceland is one of the best places to catch the Northern Lights thanks to its latitude (which is close to the Arctic Circle), its distance away from major sources of light pollution, and the high quality of Iceland’s travel infrastructure.

“There are a lot of Icelandic tour companies that offer Northern Lights tours,” Wang says. “While they can’t really better predict the occurrences of Northern Lights any better than you and I can, they can make sure that you are well prepared when the chance comes up.”

Tromso, the largest city in northern Norway, is said to be another one of the best places to catch the Northern Lights since the city is right in the middle of the “auroral oval,” where auroras are seen most frequently. While you’re waiting for your nighttime lights excursion, you can spend the day dog sledding, whale watching, snowshoeing, or snowmobiling. According to Visit Norway, you can even try to snap a selfie with a reindeer. It sounds like the perfect winter adventure.

The Abisko National Park in Swedish Lapland is another cool place to catch the Northern Lights. Mountains surround the park, which help to keep the skies pretty clear. The light pollution is also pretty minimal. According to Swedish Lapland tourism, if you stay in Abisko for three days, you have an 88% chance of actually seeing the lights.

In Finnish Lapland, the nights are dark enough that the Northern Lights are visible about 200 nights a year. If the skies are clear, the best times to try to catch it are between August and April. And you definitely up your chances the further north you go. The best part is, Finnish Lapland offers up some wanderlust-worthy accommodations, from glass igloos to luxury teepees. It’s definitely worth checking out.

If you’re up in Canada’s Yukon territory, you can catch the lights from mid-August to mid-April. Some tour operators will even take you to remote areas by snowmobile or dogsled to get a good look at the lights. 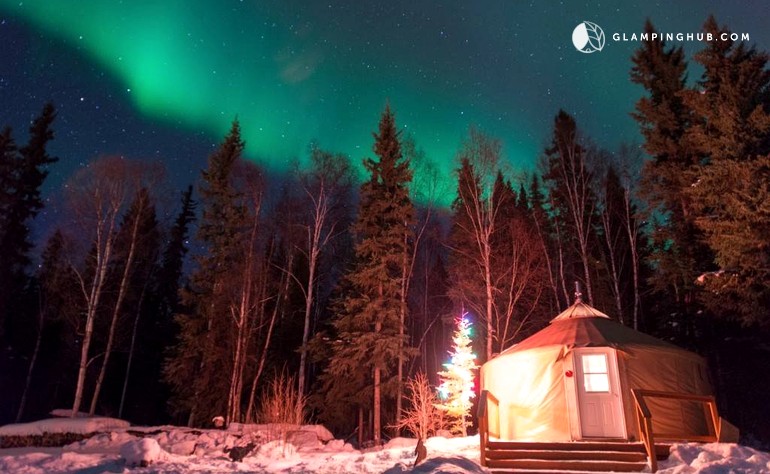 You can try to catch the Northern Lights anywhere in the state, but Fairbanks is your best bet since it’s within the auroral oval. The best times to go are from September until right around the end of April. During this time, displays are frequent, there are clear skies, and the weather is generally milder.

If you’re feeling a little adventurous, travel sites like Glamping Hub offers yurts in Fairbanks where you can try to catch the lights.

“My main recommendation when attempting to see the lights is to give yourself plenty of time and book excursions that have flexibility,” Jessica Armstrong, travel expert and partnerships manager at Glamping Hub, tells HelloGiggles. “It can be tricky to plan to the date when they will appear and not. So having at least four days will give you at least one chance to see them.”