What really happens when your book becomes a movie

Many writers fantasize about it, wish for it, and dream about it. But no amount of wishing could have prepared me for the afternoon last April when my literary agent called to tell me one of my books had been optioned for film by the Hallmark Channel.

People ask me what went through my head when I got the call. To be honest, I have no idea. I don’t think I was capable of coherent thought, to tell the truth. I cried. Like, a lot. I’ve published quite a few books with Harlequin, but Unleashing Mr. Darcy was special. It was my first “big” book. It got great reviews, and when it hit shelves on New Year’s Eve in 2013, I hoped it would be a bestseller.

It wasn’t. Not even close, actually. Since then, the book has done pretty well. It’s even been translated into several languages. But at the time, I remember feeling like I’d let down a lot people who had really believed in me…my agent…my editor. Everyone. I can’t lie. My confidence had taken a pretty big hit. The movie option went a long way in making me believe in my writing again. Of course, who knew if the movie would actually get made? Lots of books are optioned, but far fewer go into actual production. Obviously, I hoped it would. But back in April, that seemed like icing on the cake.

In mid-October, my agent called with the ultimate good news. Hallmark had given the script the green light. Not only was the movie being made, but they wanted it done FAST. Filming was to start in three weeks, with an air date in January. I had no idea that a studio could even make a movie that fast. This was ALL the icing on ALL the cakes.

It was around this time that I began to lose my mind. (But in a good way.) When people hear that an author’s book is being made into a film, they seem to think the writer is super involved in every decision along the way—the casting, the script, the location, everything. That is not the case at all. (Unless you’re Nicholas Sparks or Dan Brown or somebody, and even then, who knows? Give me a call Dan Brown, and we can discuss.)

Once you’ve sold your story, it’s not 100 percent yours anymore. And since everything was happening so fast, having a daily tête-à-tête with me wasn’t exactly anyone’s top priority. So I basically resorted to stalking my own movie on social media, like it was a cheating boyfriend or something. It was incredibly surreal. I learned the identity of the movie’s director when he sent me a friend request on Facebook. This was like hitting the jackpot, but I still didn’t know anything about casting, and it was making me crazy.

My book is a modern-day version of Pride & Prejudice, set in the dog show world. Mr. Darcy is the same dreamy, intense, brooding Mr. Darcy that we all know and love, but he’s also a dog breeder, a dog show judge and, because this is the 21st century and all, a billionaire. (10,000 pounds a year would never sustain a place like Pemberley in today’s economy. Duh.) Obviously, I was full-on freaking out over who would be chosen to play Mr. Darcy. I mean, it’s an iconic role. My first choice was Prince Harry. (Yeah, I know, but what can I say? I’m a writer. I have a very active imagination.) I thought that might be a tad unrealistic, so my new hobby became obsessing over potential Mr. Darcys.

The week before filming began, I finally got to speak with the executive producer, Sydell Albert. I was invited to come watch the movie being filmed for a few days, during the big climactic ballroom scene at Mr. Darcy’s mansion. Before we hung up, I asked (begged) Sydell to tell me who had been cast as Mr. Darcy. She didn’t want to tell me. She wanted me to be surprised, but promised I would be thrilled. Then she said, “He’s actually on his way here right now to be custom fitted for his tux.” I nearly had a nervous breakdown.

Sydell must have known I was beginning to crack, because she let me in on Mr. Darcy’s identity—Ryan Paevey, who plays Detective Nathan West on General Hospital. I was not familiar with Ryan, but in the 9 days I had to wait until I arrived on set, I did a thorough surveillance via YouTube and Google. He was ridiculously handsome and had a deep Darcy-esque voice that was to die for. I could work with this, I thought.

Still, none of it actually seemed real until I arrived in Canada for filming. I’d been so far away and so unaware of what was going on, then BOOM I was on a movie set with a crew of over 100 people. I wish I could find the words to explain what it’s like to see something I’d made up inside my head become a real thing, with real, actual people. All I can say is that I wish every author could experience it. I really do.

One of those real people who was involved in the movie is the legendary actress Frances Fisher, who played Kate Winslet’s bitchy mom in Titanic. She plays Mr. Darcy’s bitchy aunt in Unleashing Mr. Darcy. I moved around her in terrified awe for two days in Canada. She was actually hilarious on-set. (Not at all bitchy.) I had a walk-on role in the movie and got to walk right behind her. My mom nearly died when I shared that information with her.

The last day I was on set, the crew surprised me with a director’s chair with my name on it. I’d done a pretty good job of keeping my cool while I was in Canada (unless you count the ridiculous smile on my face every single time Ryan opened his mouth and said something in his Darcy voice), but I lost it when I saw that chair. I totally cried, you guys. The producer said I could take it home with me, and just as I was imagining dragging it on the plane as a carry-on, she told me she meant the name plate, not the whole entire chair. Still. Awesome. I had it framed when I got home.

Unleashing Mr. Darcy premieres this Saturday night on the Hallmark Channel. I’ve not seen the movie yet. I’ll be seeing it for the very first time at the viewing party I’m having Saturday with my friends. But I’ve read the script and I’ve seen enough to know that I will love it. And in the end, it doesn’t really matter if it’s slightly different than the book I penned. It’s still my story. It’s still my Mr. Darcy. And seeing it come to life is a happier ending than anything I could have written on my own. 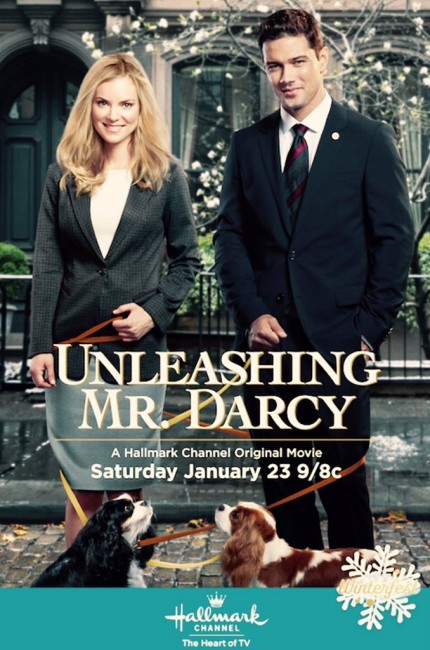