When I go shopping as a Black woman

On April 12th, 2018, two Black men were arrested at a Philadelphia Starbucks and escorted out of the store in handcuffs — simply for waiting for a friend inside.

I once joked that my father was a “transformer,” changing his self-composition as we drove to visit my maternal grandparents. By the time he walked through their front door, his speech and body language had already changed. He was the respectable son-in-law that put my grandparents at ease.

It took me a while to realize that my father was always transforming. I learned about racial bias when I realized that my father most often changed when we were in public spaces. Once we entered a store, his gait slowed, he relaxed his massive six-foot frame, and he was courteous to everyone. When an employee crossed our path, he smiled at them and said, “How ya doin’ now?” in his yawning New Jersey accent.

My father doesn’t like to smile, and he’d be the first to tell you that he didn’t give a shit about the people in the store. Yet he always gave the employees his time. If they asked how they could help him, he would tell them. As we later sat empty-handed in the car, my father would let loose a stream of expletive-filled complaints. I never understood why he invested so much in those interactions. 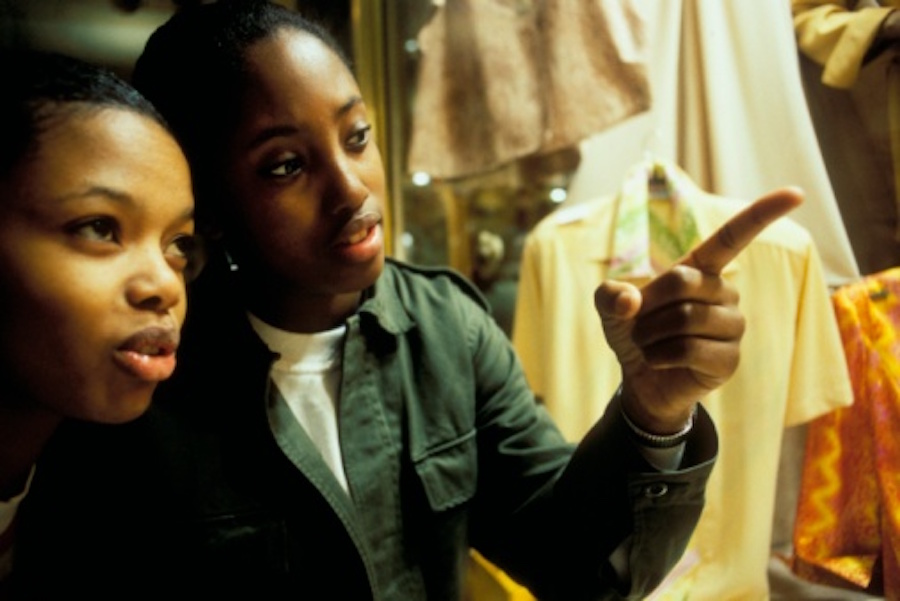 My Black body was first policed when I was 11 years old.

My friends and I spent our junior high years hanging out in the Kmart next to our apartment complex. We didn’t have money to spend. Kmart was one of the few places we could go when we were bored.

The first time, I didn’t fully recognize what it meant when a security guard followed our every move. As more of my friends complained about needing to use different entrances to avoid the guard, I began to understand. I quickly learned how I was supposed to behave in this space and began to make note of the security guard and the cameras. I stopped running in the store. I stopped touching the merchandise. Eventually, I stopped going to Kmart altogether.

I became more aware of white authority figures and their presence in relation to mine. My Black body disrupted the predominantly white spaces around me. Experiencing racial bias fully awakened my double consciousness.

W. E. B. Du Bois wrote about double consciousness in his autobiographical work The Souls of Black Folk. Double consciousness means being able to see one’s (Black) self from the perspective of white society. It allows for a fuller understanding of the Black experience and what it means to live in a society that openly demonstrates contempt toward you.

Since my first experience being policed, I have developed a set of guidelines to use when I am shopping while black.

1I change my public countenance.

I attempt to be presentable by first ensuring that I am dressed nicely. This means never wearing hoodies in the store, even when it’s cold or when I’m having a bad hair day. I walk with a purpose and do not meander. If someone speaks to me, I soften my tone so that I sound congenial. I do these things to reduce my chances of being mistaken for a thief, thug, or loiterer. To show that I belong there.

2When a store employee asks me if I need assistance, I apply two different strategies.

When window shopping, I say, “No, but thank you,” and take an extra second to look around before leaving. I always say, “Have a nice day” as I walk out the door. I hope this decreases suspicions about my presence and the chances that someone will accuse me of shoplifting. Even though I want to stay and appreciate nice things, I leave because I don’t like employees following me around the store.

If I know that I am going to purchase something, I will tell the employee what I am looking for even though 99% of the time I do not want to be bothered. I do this so that they know I am a legitimate customer and to make them feel comfortable about my presence.

3I shop as quickly as possible.

When searching for items at the store, I don’t take too much time at each rack or display case because someone can construe that as suspicious behavior. When I shop and try to take my time, I think about the day before my college graduation when my parents took me to Macy’s to find an outfit to match my Converse high tops.

As we ambled through the store searching for potential outfits, a man followed us. He talked loudly on his cell phone and was dressed like a regular shopper. The more we watched him and paid attention to what he was saying, we realized he was an undercover officer. We had exceeded our shopping time. Defeated, I told my parents that I no longer cared about how I looked on graduation day and just wanted to leave.

Now, whenever I think about my college graduation, I cannot separate my experience with racial bias from that memory.

4I always search through my bag or purse in the open.

If I need to access my purse for any reason while in a store, I immediately step out into an open space before I begin looking through it. I make sure that I am someplace where anyone can see me. I use big gestures when looking through it and often mumble loudly about “needing my phone” or “not finding my keys.” I also try not to reach in my pockets for any reasons.

5I am extra aware of myself in parking lots.

When I’m driving behind someone and they park first, I try to avoid parking next to them. If I do, then I wait until they have walked a reasonable distance past my car before exiting. If I am behind a white person when returning to my car, I slow my footsteps — a difficult task to accomplish since I am supposed to be walking with purpose, remember? I don’t want them to accuse me of stalking, harassing, or attempting to rob them. Sometimes I stop to check my phone or pretend to be lost so that they don’t think I am following them. However, I can’t do this for too long lest they accuse me of attempted car theft.

Racial bias has reared its head again, and the hashtag #BoycottStarbucks is trending. An employee at one of the coffee giant’s Philadelphia stores called the police on two black men waiting for a friend, which later led to their arrest. I have to reconsider what this means for my Black body in public spaces. I have always thought about my active movements and the disruption they caused. What does it mean to merely sit down while being presentable and polite, yet still have the police called on you? It means that, no matter what I do, I am still a threat.

I am exhausted from the way my Black body is scrutinized in our American society. The daily barrage of discrimination only augments the negative impact that stress has on Black life expectancy and mental health in America.

We all must commit to advocating for the end of racial bias. We can no longer sit by and let these hashtags, boycotts, and protests fall by the wayside. They need to be our daily rallying call. We must hold each other accountable if a real and permanent change is ever going to happen.