What “Pretty Little Liars” taught me about female friendship

I remember when Pretty Little Liars first premiered: It was the summer of 2010, I was 17 years old, and my high school best friend and I were glued to the couch. Years before hashtags like #pll or #pllendgame trended on Twitter, my best friend and I would simply text each other, “PLL?!”  and rush to each other’s houses, eager to dive into the latest installment of I. Marlene King’s television phenomenon (based on Sara Shepard’s YA novel).

Seven years have passed, and the Liars have aged alongside us — experiencing career setbacks, romantic proposals, and endless family trials — growing pains my best friend and I also face as 20-somethings (though our hardships are, thankfully, on a much smaller scale). Over the years, we’ve added new friends to our inner circle, making our intimate friendship of two blossom into a vibrant girl group of six.

Surrounded by harmoniously-minded but wonderfully distinct women— each who I love and connect with in different ways — I started using PLL as a model for navigating my friendships in everyday life. 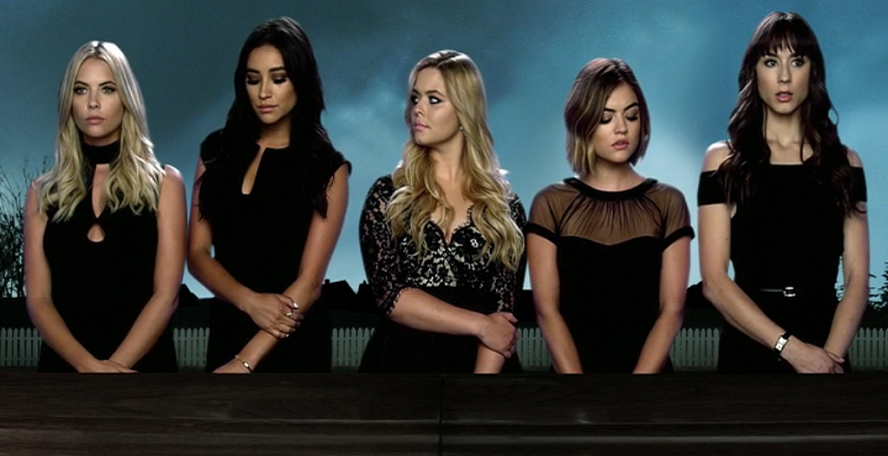 1Appreciate diversity within your girl group

One of the best qualities of PLL‘s characterization of its five main characters — Aria (Lucy Hale), Spencer (Troian Bellisario), Hanna (Ashley Benson), Emily (Shay Mitchell), and Alison (Sasha Pieterse) — is how the group remains close while maintaining individual identities. Each of the Liars has different skill sets and career goals, from fashion to politics…and many things in between.

Unlike many teen dramas that preceded it — shows where girl groups were stereotyped as hot cheerleaders, lonely brainiacs, or aimless beach bums — PLL managed to make each girl in the group a fully fleshed-out character.

Not only that, but the Liars were complicated people who would grow and contradict themselves — like when characteristically sweet Emily punches Sara Harvey, or habitually loyal Aria betrays her friends. All the girls experience different struggles throughout the series, like Spencer’s addiction to prescription pills or Hanna’s eating disorder. Good, bad, and ugly — the Liars are a diverse group that celebrate each other’s differences.

It’s also very important to note that — in terms of representation — Emily is the most notable example of diversity on the show, with Shay Mitchell’s Filipina nationality and her character’s lesbian sexuality. (In other words: Emily is a gem that a largely whitewashed PLL could not afford to lose.)

2Encourage each other to dream big.

Longtime fans have witnessed the Liars transition from high school, to college, to 20-somethings…and throughout the years, one thing remains consistent: the girls’ everlasting support of one another’s dreams.

In the early seasons, the Liars made it a point to attend Emily’s swim meets or Spencer’s debates; in later seasons, they start to support each other in more significant ways, like when Mona (Janel Parrish) uses her political clout to secure Hanna a high-profile client for her new fashion line. The Liars always encourage one another in their goals, whether Aria is co-writing her debut novel or Spencer is pursuing political advocacy in D.C. These girls inspire one another to dream, and dream big. 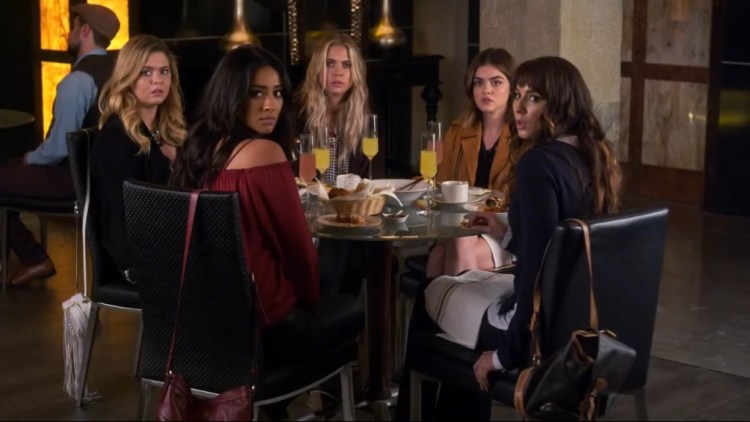 3Comfort one another, always

There are so many iconic moments of the Liars experiencing unthinkable hardship, and ultimately, standing together — arms wrapped around each other in comfort. Remember the season two finale, when Maya was found dead and the girls stood outside the crime scene, rallying around a sobbing, heartbroken Emily? Or how about later, when they’re huddled together in formal wear, prisoners of Charlotte’s underground dollhouse? In PLL, there are few emotions stronger than the solidarity of grief.

And even though their circumstances aren’t especially normal, in a society that promotes social and romantic competition between women, it's still uplifting to watch the Liars comfort one another through heartbreak, family drama, and emotional setbacks.

There’s nothing quite as moving as when the Liars confide in one another and receive only acceptance and support.

One of Alison’s early mantras was, “Friends share secrets — that’s what keeps us close.” Though the undertones of her statement were ominous at the time, her sentiment was true: The secrets the girls share have kept them close, despite inevitable time and distance. There’s nothing that makes the Liars more united than their shared secrets, from season one’s infamous “Jenna thing” to the recent (and accidental) murder of Alison’s duplicitous husband, Archer Dunhill.

And there’s no better example of the Liars’ loyalty to one another than the numerous times they’ve been questioned by — and subsequently lied to — the Rosewood police. In Season 2, they were under suspicion in Alison’s supposed murder; in Season 3, when Alison’s body goes missing, they’re on the suspect list once again; in Season 5, Spencer, Hanna, Aria, and Emily are all arrested as accessories to murder. I could go on, but you get where this is going. If you catch any of the Liars in a police station, odds are, they’re lying to protect one another.

Even in Season 7’s “Choose or Lose,” the Liars are once again summoned to Rosewood PD, this time by Detective Tanner (a welcomed return, by the way, though maybe not for the Liars) and there’s a powerful shot of the Liars sitting side-by-side, listening to the evidence Tanner has collected against them, each of them wearing their long-perfected poker faces.

For better or worse, the secrets the Liars share have united them forever.

Though most secrets have a way of eventually surfacing on PLL, the best sign of a strong friendship is a mutual respect for one another’s privacy. Even while sharing secrets of (literally) life and death, the Liars occasionally keep things from one another, too — whether for selfish or selfless reasons, it’s doesn’t matter. Most of the secrets the Liars have kept from one another look sinister on the outside: when Spencer pretended to join the A-team in Season 3, or when Aria actually did in Season 7. But the reasoning behind their secrets is often understandable. If the Liars are actively keeping secrets from one another, it’s usually for a good reason. 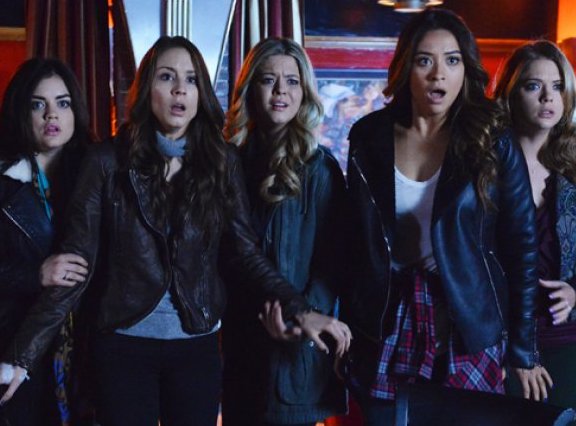 Whether you’re coping with a breakup, a death, or the image of your mother lip-locking with a dirty cop so he’ll drop the shoplifting charges against you (looking at you, Ashley and Hanna Marin), a healthy friendship allows you to process life events in your own time. If there’s one thing PLL has taught me, it’s that a person’s motives can matter just as much as their actions. So yes, the girls in your #squad have a right to their own privacy — even their own secrets.