Here’s Why Experts Say You Should Walk Barefoot More Often

This earthing practice could heal you from within.

When was the last time you walked barefoot on the earth? Probably not for a while. Unfortunately, modern society and city living have disconnected us from walking on our planet’s natural surface, like sand and grass, by wearing synthetic-soled shoes. And most of us probably don’t even consider walking barefoot in a park when we think of self-care. However, earthing (or grounding as it’s also known as), can be a natural energy enhancer that connects us to what some say is the most powerful gift of all: Mother Nature.

But what is grounding in the first place? According to Dr. Christian Gonzalez, a Los Angeles-based naturopathic doctor and host of health podcast Heal Thy Self,  grounding is basically when you take your shoes off and put your feet on the Earth’s surface—like on grass, sand, or dirt—to electrically reconnect with the Earth‘s electronic charges. “It’s so powerful, there is a true science behind it, and we don’t even know how expansive its therapeutic effects could be,” Dr. Gonzalez tells HelloGiggles.

And he might have a point. According to Healthline, while grounding is an under-researched topic, a few scientific studies have proven that there are benefits to doing this holistic practice. For instance, a 2018 study found that massage therapists experienced a large increase in physical function and energy along with feeling less fatigue, depression-like emotions, tiredness, and pain when they grounded themselves compared to those who didn’t.

If you’re a bit curious about this, then you came to the right place. We talked to earthing experts about everything you need to know about this energy phenomenon.

Why is earthing important?

According to the Earthing Institute, the planet Earth is like a giant battery that is being constantly recharged by the sun. The sun sends out these positively and negatively-charged ions, which is absorbed through the earth via lightning and rain. These electrons, when absorbed by living things, help keep things running in rhythm and balance with the natural biosystem of life.

As a result, when you are grounded to the earth barefoot, your body absorbs the Earth’s electrons like a sponge. They then move throughout your body, impacting it from top to bottom, which, according to the Earthing Institute’s website, can reduce inflammation and pain and help improve sleep and energy levels. According to a 2015 study, researchers found that grounding can affect the living matrix (which is the connective tissue between living cells). They also claimed the antioxidant defense system aids in the “occasional recharging by conductive contact with the Earth’s surface,” which can reduce inflammation.

So how does grounding work?

“Well for one, we’re energetic beings. We’re not made of mass, we’re made of energy. The illusion of mass is there because we think we’re material beings, but really, we are energetic beings at our core,” says Dr. Gonzalez. “Well, so is [the] earth. The surface of the earth is coated with an infinite amount of electrons, and that electrical impulse interacts with our electrical state, and it can create miracles.”

Basically, Dr. Gonzalez says, grounding eliminates this ambient electromagnetic pollution. “So we’re hearing about the dangers of electric magnetic fields (EMFs or also known as radiation), and they are really a major issue. But what is our number one defense against it? Taking off our shoes and going outside,” he explains. “One 2012 study on earthing says, ‘The body of a grounded person is not subject to the perturbation of electrons and electrical systems,’ meaning we’re not being affected by those things.”

Why have we lost touch with this natural healing modality?

Blame it on shoes. While our ancestors walked around barefoot, our synthetic shoes have blocked the earth’s natural healing energy field. According to the Earthing Institute, most footwear today is made with plastic or rubber composite soles, which don’t conduct the earth’s electric energy. As such, they prevent our feet from being able to absorb the earth’s subtle energy.

We also live and work in buildings, which are above the earth’s surface and so we frequently lose touch with its natural power.

What happens when we connect to earthing?

“When we do earthing, what happens is, our electric potential becomes equalized with the Earth’s potential, and there is a transfer of electrons into our body,” says Dr. Gonzalez. “We basically connect to the Earth’s electrical system.”

In terms of how long you should ground for, according to Dr. Gonzalez, the process doesn’t take long to reap the benefits. “The electrical changes in the brain and muscles [from the participants in the 2012 study] were pretty instantaneous. So as far as timing, [the changes] happen pretty fast,” he says. “One thing that one needs to be aware of is that grounding must be on conductive systems, for instance, grass, sand, dirt. It doesn’t work on concrete because concrete is not a conductive system.”

If you’re looking for a specific time frame, some earthing websites list 30-40 minutes as a sufficient amount of time to ground per day.

What are earthing products?

Additionally, there are also earthing sheets, desk mats, and other earthing products that you can purchase and use during the day and night. While there haven’t been a lot of studies performed on these products, according to Dr. Gonzalez, the items in the 2012 study in addition to the ones mentioned in a study done in 2015 were used indoors. Plus, the participants were connected to ground rods outdoors, which is how the Earthing Institute describes its products. The key is to use the earth’s natural energy.

As the website states, “Earthing products do not operate on electricity, so it does not matter what the electrical current is in your country (whether 110 volts or 240 volts, etc). Earthing products simply allow the natural, gentle energy from the Earth outside to be carried inside. When you make physical—bare skin—contact with the Earthing product, it is the same as if you were standing or walking barefoot outside. This is what creates the benefits of Earthing.”

The institute prefers that products be connected to Earthing grounding rods for those who live in older, ungrounded buildings (in which the electricity isn’t connected to the ground), or for those who simply prefer to bypass an electrical outlet for indoor grounding. You can also plug an Earthing mat into a wall outlet; however, you will have to determine first whether your electrical system and outlets are indeed properly grounded. An electrician can determine that for you or you can purchase a simple outlet ground checker at an electrical supply or hardware store. Or, you can use the one that is included with an Earthing mat. 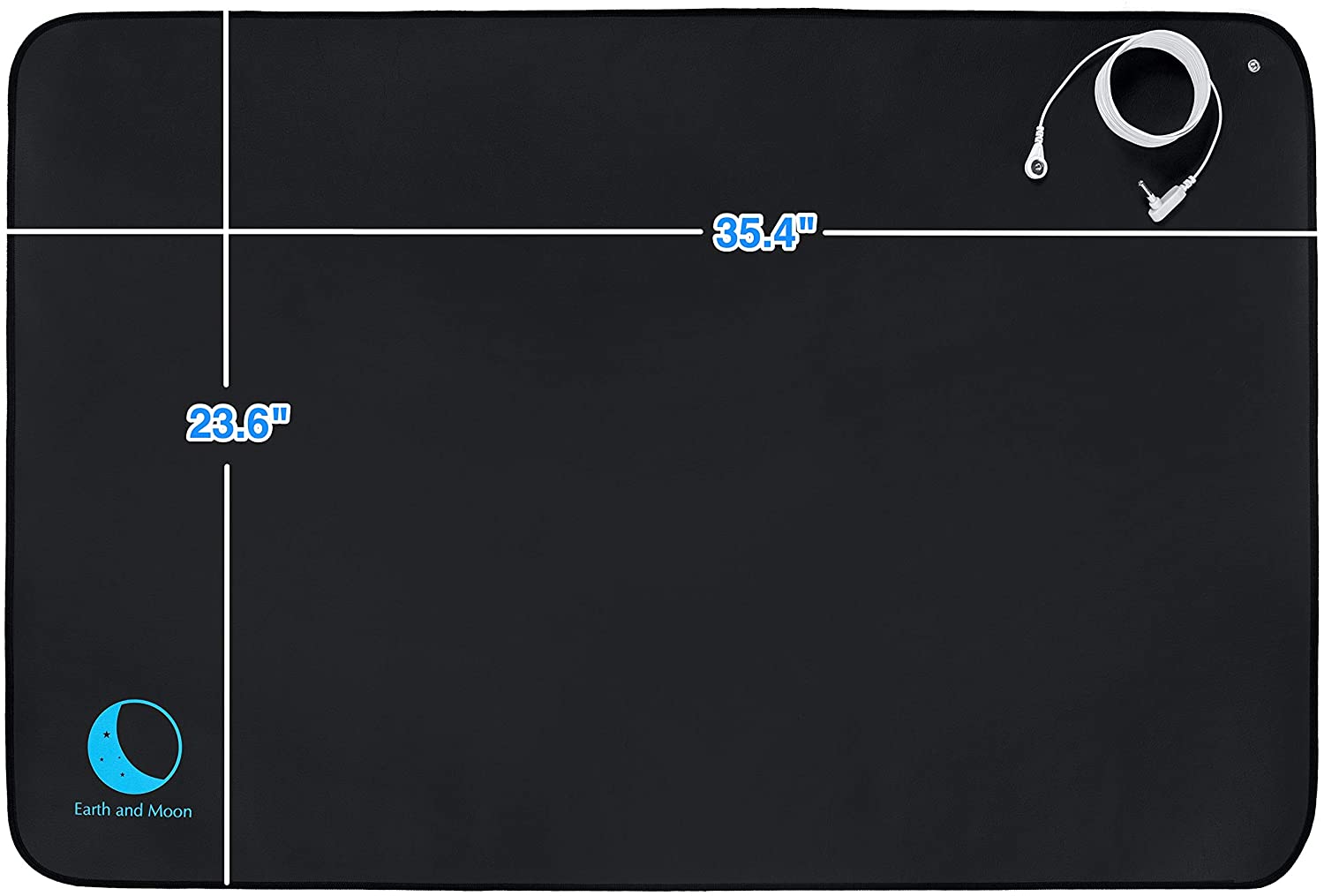 Rebecca Harrell Tickel, who directed the documentary, The Earthing Movie, admits she was initially a skeptic before making the film. Now, she says, “I won’t go anywhere without bringing our earthing sheets and I’m constantly barefoot on the grass. If I have a headache, earthing stops it. If I have an upset stomach, earthing helps. If I feel upset or angry, earthing brings me back to myself. I never thought I would become such a believer, and now I hope everyone gets access to this healing tool.”

Since earthing, Harrell Tickel says her hormones have become more balanced, and she lost a “tremendous” amount of weight. “It was a nice surprising side effect since I was using Earthing as a tool to help heal my daughter from the chronic respiratory issues she suffered frequently landing us in the ER in the middle of the night. She also has healed from Earthing. We all sleep on sheets that are connected to the Earth and it has truly saved us,” she says.

According to studies published in the Journal of Geophysical Research, Dr. Gonzalez says the researchers found that due to earthing, “the reduction in stress and tension moved the autonomic nervous system to parasympathetic. Also, when they measured men who had delayed onset muscle soreness, which is the soreness right after working out, these studies found that those who didn’t ground had a sharper increase in white blood cells. And the ones who did ground had a lower spike in white blood cells, indicating that it also helps control the immune response, and thus the inflammatory response.”

While other subjects had reported having an improved heart rate variability, no studies on earthing cited hormone stress and weight loss as a benefit. Dr. Gonzalez says since earthing does help alleviate stress, “it will indirectly help hormones because stress is a massive disrupter of hormones so there’s an indirect part [connected to it] as well as weight loss.”

Why about the naysayers?

“The earth is covered with these negative electrons, and that’s a fact,” says Dr. Gonzalez. “It is an established, though not widely appreciated fact, that the Earth’s surface possesses a limitless and continuously renewed supply of free or mobile electrons. The surface of the planet is electrically conductive (except in limited ultra-dry areas such as deserts), and its negative potential is maintained (i.e., its electron supply replenished) by the global atmospheric electrical circuit. We know that.”

So, some folks believe that severing our connection to these electrons is the main driver of disease. We have an electric potential that interacts with the earth, and it creates an electrical shift throughout the whole body, improving all of our systems and normalizing function. Could it be so simple that we just have to take off our shoes and get closer to nature to reduce the incidence of disease? I’m not saying yes, but I’m also not saying no. I’m saying it’s really intriguing and cheap and accessible, so why not give it a try?