We just learned this horrifying fact about periods, and we wish we could un-learn it (and un-see it)

We consider ourselves pretty educated when it comes to our own periods, but we just learned about one period fact that has us pretty freaked out, and that’s the existence of the decidual cast. Like most of you, we were like, WTF is a decidual cast?

Just trust us when we say it’s the *one* thing that could make us resent our periods even more. Most of us can probably agree that getting our period isn’t the best time in the world. It can be stressful, exhausting, and even plain depressing. Like, we’re into period pride and all that, and zero shame when it comes to period talk, but that doesn’t mean we have to be madly in love with our periods! And if this decidual cast thing happened, we’d be ready to tap out of this period thing completely.

Okay, do you feel adequately prepared to learn about the decidual cast? We tried to warn you! Internet Scientific Publications published a report on this eerie phenomenon, and it’s pretty bizarre.

"The lining of the pregnant uterus, other than the area taken up by the placenta, is called the decidua. The appearance of the normal lining of the uterus, by the effect of progesterone, can become decidualized.When an area of decidua is shed, it is called a decidual cast because it frequently comes out in the shape of the uterine cavity."

There’s no way this is real, right? WRONG. It’s basically like one giant uterus-shaped hunk of tissue that comes out of your vagina instead of the blood you may be used to. Never before have we felt so grateful for our periods.

It may sound freaky, but what’s important is that we all recognize what this is! According to our friends at Cosmopolitan, most people who have this happen to them basically go into a panic (as we would) because they’ve never heard of it. But now you know!

And because we care about you, we’re going to show you a picture of this funky thing. Please be warned, it is not pleasant! Click through only if you feel like it.

So this is it: 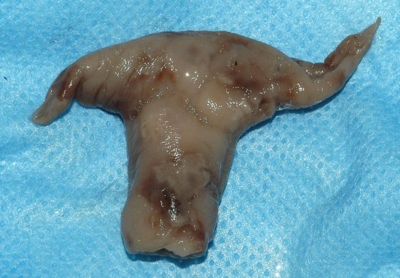 And on one hand, gag. But on the other hand, our bodies are so interesting, and we’re so curious. All jokes aside, if you’ve ever had this happen, or this ever happens to you, there’s no need to be ashamed! Bodies can be pretty weird, but that doesn’t mean we should be embarrassed.

If this does happen, it’s probably a good idea to reach out to your doctor, as it could be a variety of things, from just a super weird period to an overdose from your birth control pill to an ectopic pregnancy.

The more you know, right?