Trigger Warning: In this essay, a writer recalls surviving rape.

Do you ever look back at photos from your college days and think, “Oh my gosh, I can’t believe I left the house wearing so much pleather?” Or maybe you look back at the year you lived in a sorority house and think, “I don’t know how I handled sharing a kitchen with 15 girls.”

What about, “Was I raped in college?”

After getting drunk at a sorority formal during my junior year and finding out later that I’d had sex, I shrugged it off as something that happens all the time. It wasn’t until years later, when I told the story to my co-workers at a feminist media company, that I realized I was raped. And if the onslaught of #MeToo stories being shared across your social channels has you rethinking experiences you thought were normal, know that you’re not alone.

The thing is, I didn’t feel like a “victim” after I got raped. I figured it was just another Saturday night when I got drunk, woke up in a new apartment, and went home in some dude’s PacSun tank top that his mom probably bought for him. But now that I understood it to be sexual assault, I wondered if it was right for me to share my story; I didn’t feel like I’d “suffered” the way other girls did.

But then I realized that you don’t have to “suffer” to experience sexual assault, or to report it. Being surrounded by strong and vocal women (IRL and online) made me realize that what happened to me that one night in college was not and will never be okay. 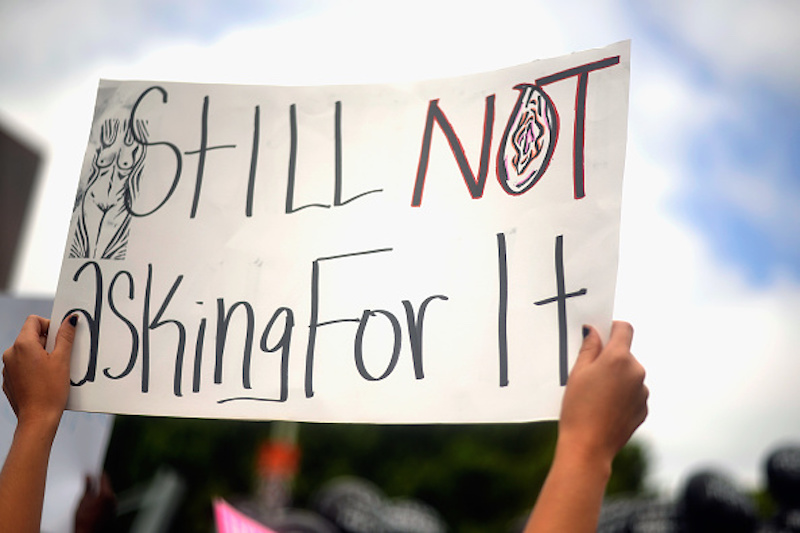 It was the spring of my junior year and another sorority formal was around the corner. These events were pretty anti-climactic to me at this point, so I just asked a random guy in a fraternity if he’d join me. We were Facebook friends, so I figured that meant we’d surely taken a shot together at some point in the last three years. Plus, he knew a lot of the guys that my sorority sisters were bringing as dates, and I thought he was cute.

When he asked me what kind of liquor I wanted him to bring to the pregame (the sorority formal version of a prom corsage, naturally), I asked for whiskey. He showed up with a handle, I poured it into a red solo cup, and I don’t remember much after that.

I do vaguely remember being drunkenly fed a breadstick at the aquarium near campus (where our formal took place), and being shoved into a cab (where I proceeded to throw up on myself). But that’s about it.

I woke up the next morning in his room. I was wearing one of his T-shirts. I had no idea what had happened. I apologized to him, saying, “I’m sorry we didn’t make it to the formal.” Confused, he told me that we did — we just got kicked out fairly quickly because I was passing out at the dinner table.

He kissed me, and not even five minutes into making out, he reached for a condom from his night stand. Confused, I pushed his hand away. Surely he didn’t think we were going to go straight from making out to having sex? We kissed for a while longer before I left.

"Welp," I thought to myself as I gathered my puke-stained dress and prepared to walk back my apartment, "Good thing we didn't have sex...it clearly would've been tragic."

But it turns out that we did have sex the night before — I just didn’t find out until the next evening when he casually texted me something about how I felt “so good.”

Confused, I asked him what he was talking about. After stating that I was completely unaware we had sex, his response was, “omg…I hate it when this happens :(.”

I felt very uncomfortable, but blamed myself for drinking too much and shrugged it off. But when I had to fish a tampon from my vagina over 24 hours later, it registered: the tampon had been pushed in when he penetrated me. I felt so violated, and I remember thinking, “How could he not even notice that I had a tampon in? He clearly didn’t even engage in any foreplay — has this guy even been through Sex Ed?” But I still didn’t realize it was rape.

It’d be really easy for me to attack this dude for somehow thinking it was a good idea to have sex with a girl who had thrown up all over herself that same night — or for acknowledging the fact that this clearly wasn’t the first time he had done something similar to another incapacitated young woman.

But what I really want to talk about is the disturbing fact that, at the time, neither he nor I realized that what happened between us was really messed up.

I was not raped because I drank too much or because my NastyGal dress emphasized my boobs. It happened because of how we are socialized. To him, guys were supposed to take any chance they could to get laid in college — even if that meant taking advantage of a blacked-out sorority girl. To me, blacking out and having sex wasn’t something I was supposed to get upset about; my friends did it all the time and laughed about it. Besides, I told myself then, what could I expect if I got drunk and went home with a guy I invited to my formal?

I didn’t yet understand that it should never be normal for me, or any woman, to wake up one morning and not remember having sex.

RAINN reports that 23.1% of women in college experience rape or assault. And until situations like mine stop happening on college campuses across the country (because, trust me, they’re still happening), we need the #MeToo movement to continue. I don’t blame women like me who kept quiet for so long because they didn’t even realize there was something to speak up about. I blame the society we live in, one that tells us men are entitled to sex by any means necessary and that women are supposed to shut up and smile.

I’m lucky that my social media feeds and friend circles are filled with strong women who remind me that I must be treated with respect and humanity. They remind me that being vocal about your experiences with sexual assault doesn’t make you a victim. It doesn’t even have to make you a “survivor” if that language feels strange to you. It just makes you a human who is taking back her control.