Television network TLC has always done a good job of showing us the parts of humanity and the human experience that we don’t often get to witness or even think about. For years, the network has been dedicated to covering “real life” stories, finding beauty in the unexpected, and unearthing unique experiences. Its primary focus: Reality programs involving love, family life, and personal stories of struggle and triumph. One of the network’s current most popular shows is 90-Day Fiancé. If you’ve never seen the show, 90-Day Fiancé is a documentary series that follows Americans attempting to legally move their foreign significant others to the U.S. The couples must file for a K-1 visa, aka the “fiancé visa.” If approved, they then have 90 days to decide to get married before the visa expires.

As we watch each couple navigate the complexities of their relationships, we get more than just some good, old-fashioned reality TV entertainment. We also get a surprisingly insightful peek at the state of marriage and immigration in America.

While watching the show, you can’t help but notice a common thread binding a few of the couples. Many people seem so desperate for love and companionship that they set out to find it in places that are less “traditional.” Each season, we see men and women who use international dating apps in the hopes of finding love in foreign countries. And it’s not surprising: Society has done an excellent job at making us believe that being single is some kind of a disease, and that if you aren’t married by a certain age, there must be something wrong with you. Each person on the show seems to be living some weird extension of that social pressure.

During courtship with their foreign spouse, it’s easy for viewers to notice red flag after red flag, all of which the lovestruck Americans do their very best to defend and dismiss. Perhaps they’re blinded by the possibility of happily ever after. Who among us, right? And of course, the show’s creators are quick to capitalize on all the drama taking place.

But as romantic as pop culture has made long-distance relationships out to be, for most, it isn’t ideal. So at some point, the couples discuss ways to move forward, which usually involves living in the same country. And because of the narrow focus of this show, the foreign partner always ends up agreeing to leave their home countries for a new life in the United States with their loves. It’s occasionally addressed by less-than-subtle family of the American cast members, but whether it’s directly said or not, the entire show carries the subtext of doubt:

It’s the harsh reality that underscores these couples: Are the Americans just desperate for love, allowing them to remain willfully ignorant that they’re being used for a green cared? Are we cynical and xenophobic for even suspecting that? There’s a lot of tension and uncertainty to the show, and it’s a lot to unpack if you choose to do so.

Once the partners decide that living together in the U.S. is what they want, the real work begins — and the clock starts ticking.

The United States offers several visa options for foreigners looking to obtain permanent residency in the country. In this case, a K-1 visa is required. Before filing for a K-1 visa, a couple must have seen each other in person within two years prior to the filing. It is important to collect evidence of having met in person prior to filing and include this evidence with the petition. Failure to provide evidence of having met in person can result in a RFE (Request for Evidence) later in the process.

An American — the petitioner — begins the K-1 visa application process on behalf their foreign fiancé by filing form I-129F which is the Petition for Alien Fiancé with United States Citizenship and Immigration Services, along with form I-134 (Affidavit of Support). If the petitioner is unable to financially support their fiancé, then it is possible for someone to co-sign this affidavit.

We’ve seen this issue occurring several times this season. Young mom Nicole fell in love with Morocco native Azan but doesn’t currently make enough money to support another person. However, Nicole’s father stepped up to co-sponsor. If the lovebirds go through with their nuptials, then he will be responsible for Azan’s well-being for up to ten years. Although, he may not have to worry about being financially responsible for another person because according to rumors, Azan’s visa application may have been denied. But don’t count out the young lovers just yet: Nicole has stated on the show several times that she would relocate to Morocco with her daughter May if she was unable to find a sponsor of Azan, and this is a similar situation. 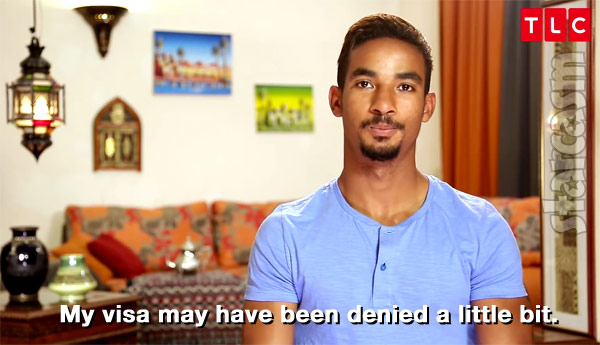 If the petition is approved, the petitioner must then pass a series of biometrics, and then the case files are sent to the embassy of the foreign beneficiary; the beneficiary then files for a visa. It’s then on the beneficiary to meet the requirements of the visa, which includes proving adequate proof that the relationship is real, and that the couple isn’t trying to commit fraud against the US government. To partially address these concerns, Congress passed the Immigration Marriage Fraud Amendments of 1986, which placed a two-year conditional period on a foreign spouse’s permanent residency.

And it’s not just enough to get married — couples have to stay married.

Dissolution of the marriage within those two years can lead to removal of the foreigner’s permanent residency status. As a result, the officials conducting these interviews are specially trained to detect any fraud. They’re taught to look for marks of a “typical relationship,” which is used to prove the validity of the union. Things like photos and proof of shared vacations, events attended as a couple, and holidays spent together, and combined finances and property. But most of all, they are looking for the couples to have a genuine intention to live together in a real marital union.

In some places, visa appointments are booked until January 2019, which could be a contributing factor to another kind of fraud: Romance scams. This involves the foreigner attempting to victimize the American petitioner. In other words, people looking to move to America could very easily pretend to be in love with an American through online romances, then leave as soon as the process is complete.

Take Danielle and Mohamed, for example. Last we heard, Danielle was hoping to have her ex-husband deported because she believes he used her for a green card.

In 2014, the Department of State issued a total of 35,925 “K-1” visas to fiancées of U.S. citizens. Including derivative categories—mostly for children of fiancées — a total of 41,488 visas in the K category were issued. And the Census Bureau reports that one in five married households has at least one spouse who was born outside the United States. false

If there is enough evidence that the relationship is legit, the foreign fiancé will then travel to the States to live with his or her prospective American spouse. The couples must marry within 90 days, or leave the country. But the road to happily ever after isn’t an easy one as most couples may face language barriers (Hey, Paul and Karine), culture shock, and the stigma of being thought of as a “mail-order bride.”

All of this in addition to the usually well-intended but invasive criticism of family and friends.

The doubt from family and friends, even if it stings of xenophobia and judgment, is also at least a little understandable, since most of us have been raised to believe that there’s a right and wrong way to find and partner. But love doesn’t guaranteed a fairy-tale ending, and who are we to dictate what constitutes a valid partnership? According to Elizabeth Ford and Daniela Drake, M.D., authors of the book Smart Girls Marry Money, marrying for financial stability is an equally good reason to the tie the knot. Drake said, “When we saw how high the divorce rate is, we had a couple of questions. Why are people marrying? In our culture, it’s pretty clear from the time you’re young that you’re trained to believe that romantic love is the highest ideal and the highest concept upon which you can base a marriage.”

“Our culture accepts that men value women because they’re beautiful, because they’re young, and because they’re hot. So why can’t it go both ways? No one ever says that a man is a beauty-digger because he wants a beautiful girl. Even though women are in the workforce at record numbers, we’re not making the money that men are making. So why isn’t it valuable for a beautiful woman to look out for her security at the end of her life? Ford added.

Because we’re reality TV junkies, after the show ends, we still try to keep up with our favorite couples. A few have remained married, while other haven’t been so lucky. TLC even has a follow up series, 90 Day Fiancé: After the 90 Days, because the drama totally keeps going — and the couples continue to make fascinating case studies for the state of marriage and immigration in the U.S.