Folks, there are only THREE episodes left of Westworld, but OMG we still have so many questions. And last night, Westworld Episode 7, “Trompe L’Oeil” confirmed a huge fan theory, giving us all the biggest “OH SHIT!” moment of the series yet.

And if you’re not caught up, be warned…this is a MAJOR spoiler.

Okay, so this has been a theory floating around the internet and among fans pretty much since Episode 1, but now we can confirm: BERNARD IS A HOST. And, YUP, this makes us want to go back to the very beginning and re-watch everything with this HUGE reveal in mind.

The episode’s title (which literally translates to “deceive the eye” or “optical illusion”) should’ve been a tip off, but then it would NOT have been the first hint Westworld‘s showrunners had given us about Bernard’s truth. Here are some of the biggest signs you may have missed leading up to this reveal.

In Episode 1, “The Original,” Ford asks Bernard if he was around when their first hosts were being built.

Given the fact that Westworld’s earliest hosts were being built OVER thirty years ago, and the fact that Bernard is about 50 years old (that’s how old actor Jeffrey Wright is), it’s a funny question from Ford. Because why would a teenage Bernard be working “with them” back then? He wouldn’t…but an adult Bernard, i.e. Host Bernard would be!

Episode 2, “Chestnut,” probably had the biggest early tease when Theresa ~joked~ about Bernard practicing conversation with her like the Hosts.

In Episode 3, “The Stray,” Bernard has a (fake?!) conversation with his “wife” and talks about being confused when he wakes up in the morning.

Sound familiar? Yeah, we’ve seen other Hosts go through the same thing when they wake up, i.e. Maeve, Dolores…

Speaking of Bernard’s conversation with his wife…look at this parallel with Dolores in Episode 4, “Dissonance Theory.”

Bernard and Dolores have THE SAME RESPONSE to their family members’ deaths.

In Episode 6, “The Adversary,” when Ford appeared out of nowhere, we SHOULDA KNOWN something was up.

Admittedly, at first, you’re not paying attention to WHERE Dr. Ford came from, you were just happy he was there to save Bernard (and in retrospect, we realize now Bernard really was about to get beat up or maybe even worse killed, because…well, he’s a Host!). However, notice how there is NO DOOR behind Ford, just that wall. No wonder Bernard looks surprised.

And then, the magical appearance/nifty camera trick revealing THE DOOR in Episode 7, “Trompe L’Oeil.”

This was the last and ultimate giveaway about Bernard being a host and it was at this very moment we all screamed, “Whoaaaa!”

Honestly? We’re kinda sad it turns out Bernard is a host. 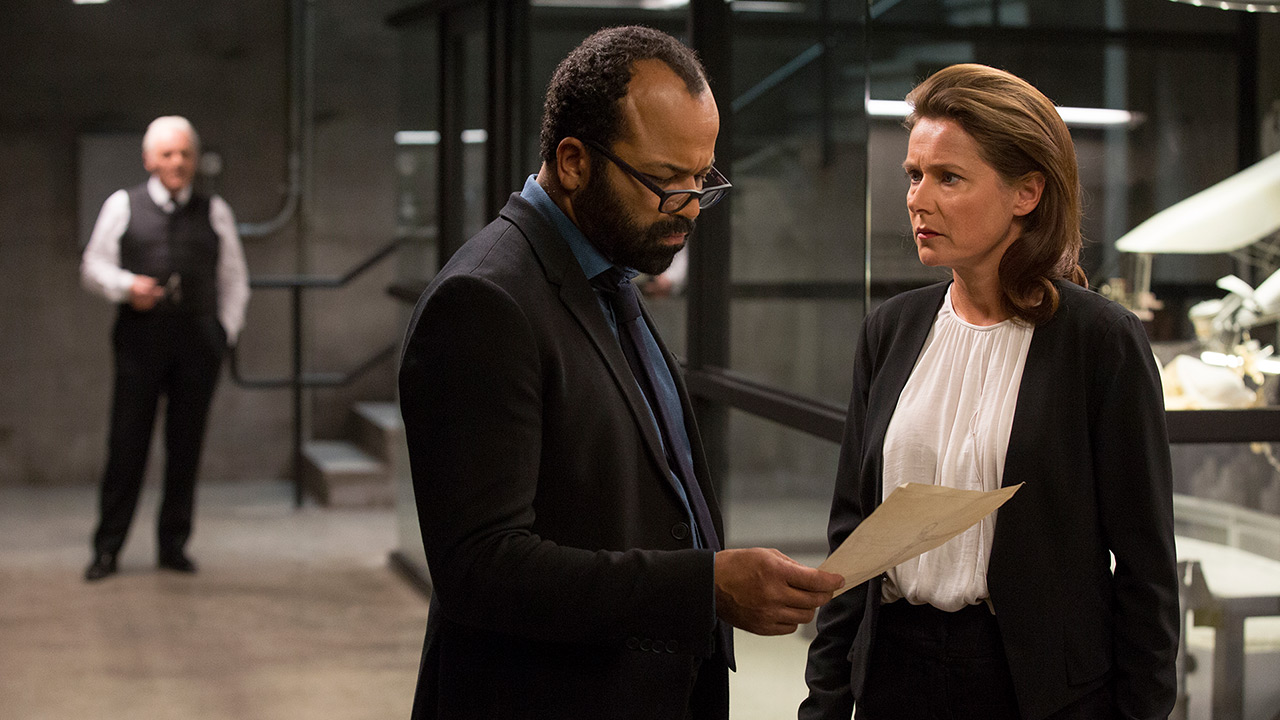 It was sad to see him go through this realization/meta heartbreak! We don’t always agree with Theresa, but when she called Ford a “monster” we kinda agreed.

We’ll be curious to see how the rest of the season plays out for Bernard…there’s still the theory out there that he’s a Host version of Arnold, and while that sounds crazy, it’s clear ANYTHING is possible in Westworld.