If you’re unfamiliar with the Population Institute, their mission is pretty great:

"The Population Institute is an international non-profit that educates policymakers and the public about population, and seeks to promote universal access to family planning information, education, and services. Through voluntary family planning, we strive to achieve a world population in balance with a healthy global environment and resource base."

On January 12th, the Institute released its fifth annual report on reproductive health in America. The main reasons that America earned a D — down from a still abysmal D+ from last year — are:

— The general hostility toward reproductive health and rights.

— The fact that our teen pregnancy rate is higher than other developed countries’ rates.

— The rate of unintended pregnancies being incredibly high.

Each state received a grade and the average led to this D rating.

How the Population Institute calculated these grades is less subjective than you’d think and is based on a 100-point system that rates effectiveness, prevention, affordability, and access of reproductive health and rights.

The only states to receive A’s were California, New Jersey, New Mexico, Oregon, and Washington with 20 states — 20 STATES! — receiving F’s. 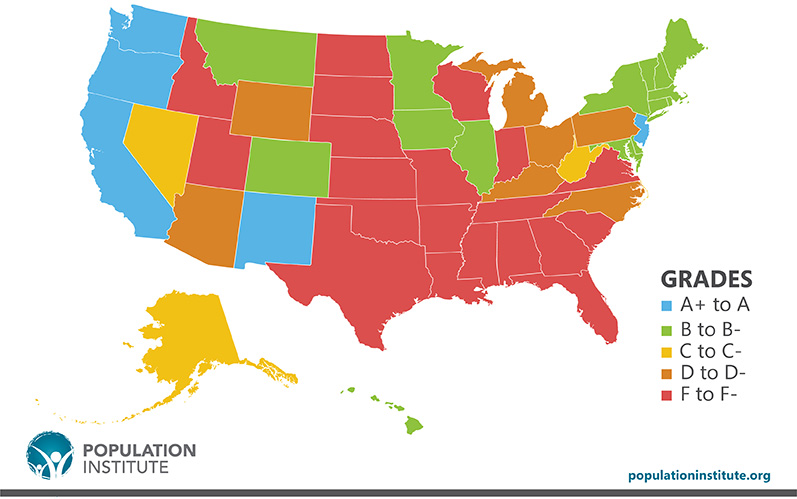 You can download the report on which state you live in to see how its reproductive grade was figured.

Even if you live in a state that received an A or a B, seeing that map of the U.S. filled with the red of F’s is disheartening and shows what a real issue reproductive health in America is. So get involved in protecting your reproductive rights and the rights of others because as the Population Institute’s report shows, this is an issue that affects the health of ALL Americans — not just women.