Wear this shade of Estée Lauder lipstick and you’ll get married in a year, according to the myth behind “Japanese Marriage Lipstick”

“You’re going to like it, but it’s also kind of offensive.”

This is how my brother described the Christmas present he and his girlfriend picked out for me. Alexander and Shiori live in Kyoto, Japan, and so we exchanged presents over Skype this year. He warned me about the gift in advance, so when I opened the beautifully-wrapped box I was surprised to see its contents were, well, pretty innocuous.

It was a lipstick.

A shiny Estée Lauder lipstick with my name, “Emily,” engraved in script on the gold case, punctuated with tiny hearts. What was offensive about this? I turned it over in my hand, half expecting to find “You’re a bitch” engraved on the other side. But nothing. Why did my brother need to warn me about this?

I turned back to my laptop screen as my brother and his girlfriend waited for my reaction. I thanked them both and started to apply the lipstick, but stopped short when I heard my brother say, “So there’s, um, a story behind it.” 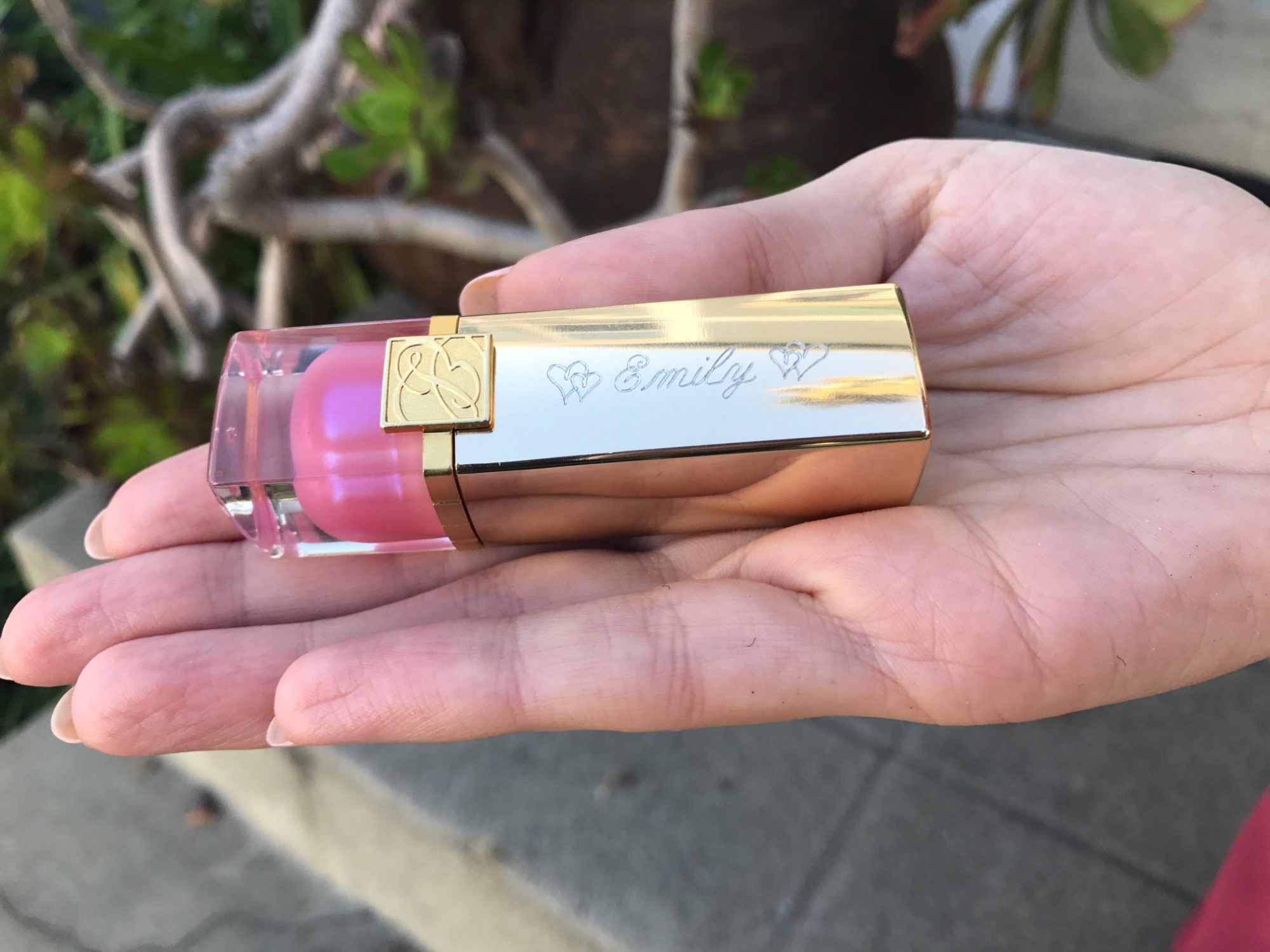 Shiori speaks Japanese, and I don’t, so Alexander translated for her. “This is a special kind of lipstick. In Japan, if you wear this kind of Estée Lauder lipstick then you’ll get married within the year.”

Aaaand there it is.

This lipstick is supposed to get me married. Now, there’s a range of emotions that you go through when you get a gift like this. First, genuine gratitude. Alexander and Shiori didn’t have to get me anything for the holidays, and this was very sweet. Next, an emotion that sort of translates to: okaaaaaay.

The subtext here is, “Hey hun, you’re 31 and unmarried, so you might want to, like, kick things into high gear. Here’s an Estée Lauder lipstick to help you get this show on the road.” Thank you?

So yes, this gift sent me through a mixed goodie bag of emotions, but mainly I just had questions. Do you have to wear the lipstick every day in order for it to “work”? If you don’t get married within the year, what happens? Do you just evaporate into the ether? Never to be seen again? And why Estée Lauder? It seems like the kind of mythical lore attached to an ancient herb, not, like, an American department store brand.

After the sting of receiving a gift that basically has a ticking time bomb attached to it wore off, I became fascinated with the idea of a magical Estée Lauder lipstick that is supposed to get you married. I had never heard of Estée Lauder “marriage lipstick” before, and that’s because you can only get this particular version of the collection in Japan. So I went to the brand’s official Japanese website to do a little digging. My lipstick is from the “Pure Color Crystal” collection, which comes in 15 different shades with names like “Crystal Baby Cream” and “Crystal Innocence Cream.” My shade is named simply, “Crystal Pink Cream.”

Estée Lauder’s Japanese website doesn’t make any overt mention of marriage under the product description, and I was beginning to think maybe Alexander and Shiori made up the whole “marriage magic” backstory as some sort of tragically sweet but misguided attempt to fast track my dating life.

But then I went to the product reviews section and clicked “Translate: Japanese to English.” The online translator doesn’t really work, garbling the original review, but the sentiment is there. For example, one review is titled “I’m Glad.” And the description is “Moisture continues.” A beat off, but you get the gist of it. A quick scroll through and immediately I saw words like “marriage,” “dating,” and “husband” pop up all over the place.

I could tell I was getting warmer, but I couldn’t quite make out what the reviews said. So I took some screenshots and sent them to my brother to translate. Below are two reviews of Estée Lauder’s Pure Color Crystal Lipstick:

Title:  Lipstick that helps you find a partner

I’m around 40 and am hoping to get married. I’ve had to invest a lot in clothes and makeup.  I read that this lipstick had the highest success rate of people getting married. Of course I bought it. So now I’ve been on 6 dates with a guy I met at a party who is 17 years younger than I am.  I wonder how things will turn out with him. Hopefully I’ll have something good to report. Thank you for this great product.

I heard this was a marriage lipstick so I decided to try it out. The first time I tried it out I happened to run into a guy I’m seeing! We had been fighting, but we were able to make up. I don’t know if this has anything to do with the lipstick, but I was certainly a little surprised lol. It would be great if my wish came true and I could get married lol.

Now, there’s a lot to take in here. There’s something sort of heartbreaking about these product reviews for a lipstick. For one, these reviews get to the root of the whole concept behind a “marriage lipstick,” which is, well, problematic, to put it lightly. The notion that it’s on the woman to buy a beauty product to land a man is archaic and heteronormative. But! Before you start shaking your fists and putting Estée Lauder Japan on blast, we have the exact same thing here in America. I have two words for you: Engagement Chicken.

Do you remember Engagement Chicken? It’s essentially the same idea as Marriage Lipstick, but with chicken, which is arguably weirder. The recipe for “Engagement Chicken” was created by a fashion editor at Glamour magazine, who got engaged shortly after cooking it for her boyfriend. The story goes she shared the recipe with friends, who also got engaged right after serving the dish (which is basically a standard lemon-herb roast chicken). In 2002 Glamour first ran the recipe for Engagement Chicken in their print edition and the whole thing took off, with women writing in claiming their boyfriends proposed immediately after they made it.

What’s also similar about Marriage Lipstick and Engagement Chicken is that both are spread by word-of-mouth testimonials. There’s no hard and fast data surrounding either, but just a general mystique. Both the lipstick and the chicken get their magic from people claiming their lives changed after using it. 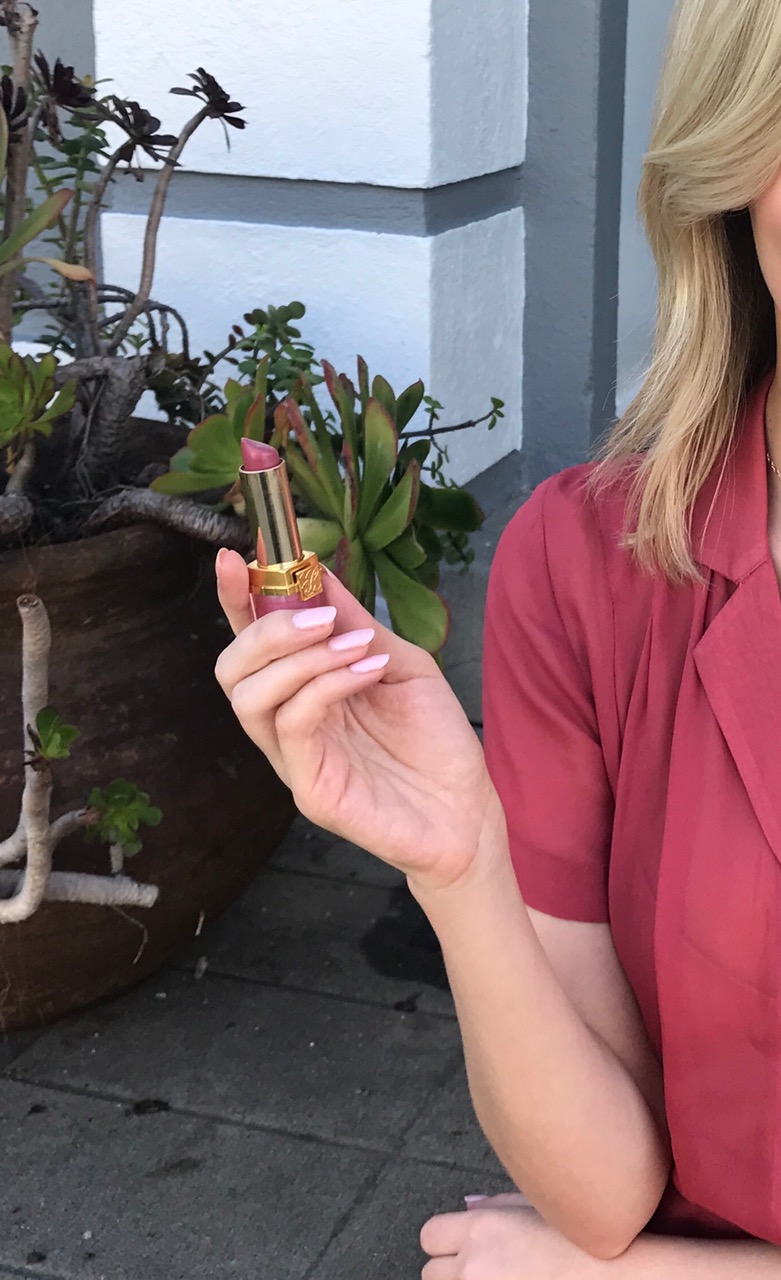 But does “Marriage Lipstick” really work? I wanted my brother’s girlfriend to weigh in. After all, she is Japanese, has lived her entire life in the country and buying me the lipstick was her idea. So I called Shiori Haruta, 27, to get her take on the phenomenon. While she’s never used the product herself, she’s bought it for friends. So. Does it work? Her response:

“I’m not sure if it works or not, but using a product like this gives women who are feeling pressure much needed confidence. This then allows them to continue looking for a partner without feeling like their time is running out.

Yeesh. This take is distinctly dark, but also weirdly hopeful? It’s sort of like, yes, “my time is running out,” life is nothing but a death march, but I’ve got this Estée Lauder lipstick from the Pure Color Crystal collection, so things are lookin’ up.

But if you can get past the whole race to the altar aspect, there is something legitimately comforting about Marriage Lipstick. And it doesn’t have to do with marriage at all. One of the reasons I buy new things, wear new things, is because I have this back-of-the-brain belief that it might change things for me. I’m not buying stuff to fill a void; it’s more nuanced than that. It’s the notion that if I feel stalled out in life, the act of introducing something new will invite even more newness. It doesn’t work, but it doesn’t matter. Because it leaves me feeling ready, prepared for that next opportunity or that next person to walk onto the scene.