You’ve seen the term plastered across article headlines, trending on social media, and included in people’s 2018 resolutions — but how much do you really know about self-care?

A buzzword that regained popularity in 2016, the concept of self-care actually has a long, rich history connected to race, gender, and class that is important to understand if you want to truly practice self-care and help others practice it, too.

During the toxic election of 2016, the term “self-care” seemed to increase in online usage as websites, newspapers, magazines, and blogs began writing guides on the best ways to practice it. They informed readers that it was okay to take time and care for oneself before caring for the rest of the world. They shared tips like getting the recommended hours of sleep each night, making time for relaxing activities to do with friends, and unplugging from the 24/7 news cycle. These pieces sought first and foremost to tell people, specifically women, something important that they aren’t always comfortable hearing: Taking care of yourself is crucial, especially if you want to take care of anyone and anything else. But missing from these narratives about self-care was the history of the term and concept itself.

From the political and medical application of the term, to the civil rights and women’s movements’ reclamation of it, self-care has more or less always been a part of the American identity.

As Jordan Kisner pointed out in his 2017 piece in The New Yorker, self-care — and who is “allowed” to practice it — has historically been a marker of citizenship in the United States. The term had been used against African slaves, and later, freed African-Americans who were deemed “unable” to practice self-care and self-government, and thus, were unequal in the eyes of the government. When women sought equality through the vote, the same argument was used against them. Before self-care became a weapon for fighting oppression as we see it today, it was a tool used for maintaining it.

Fast-forward to the twentieth century, and self-care entered an entirely different part of society: healthcare. As Slate culture writer Aisha Harris highlights, the medical profession used self-care to talk about the mentally ill and elderly, and to express their need for permanent and professional care. Later, self-care became popular among health professionals studying workers in high-risk and emotionally taxing positions and understanding how they could deal with those intense levels of stress.

So how did self-care go from a discriminatory ideology, to a medical term, to the buzzword it is today?

The concept as we know it know has its roots in the civil rights, women’s, and LGBTQ movements of the 1960s and 1970s.

Most people recognize Audre Lorde’s famous quote, “Caring for myself is not self-indulgence, it is self-preservation, and that is an act of political warfare, from her moving 1988 book of essays, A Burst of Light.

Lorde coined one of the most important and referenced lines in self-care history, and the concept of self-care was already a crucial tool for people of color, women, poor communities, and the LGBTQ movement as they worked to dismantle the systems working tirelessly to keep them down.

For members of the resistance who were fighting against discrimination and prejudice, the idea of being able to be healthy — both mentally and physically — was the very basis of their fight for equality. First, poverty activists, and later other movements, argued that being able to care for oneself — starting with the basic idea of body autonomy and ending with the ability to have the time and money required to care for said body — was a human right that all people should have.

That may seem like a no-brainer concept, but for marginalized and oppressed groups, it was (and still is) a radical statement. For the groups of people who were consistently being told their lives didn’t matter, whether it be through discriminatory cultural rhetoric or oppressive political policies, declaring that their welfare did matter was, as Lorde stated, an act of warfare.

It was a declaration of intent that said, I deserve to not only live, but to live well.

For Black and Brown communities who were being systematically oppressed and killed, for women who did not have rights to their own bodies, for LGBTQ communities who were being discriminated against and violently attacked, self-care was not just about taking a break from the madness for a spa day. It was a courageous act that started with acknowledging that they had needs, that their needs were important, and that those needs deserved to be met, no matter what their oppressors said. Self-care was a way to step away from toxic environments, to admit the hurt, and to find the time and space needed to heal. 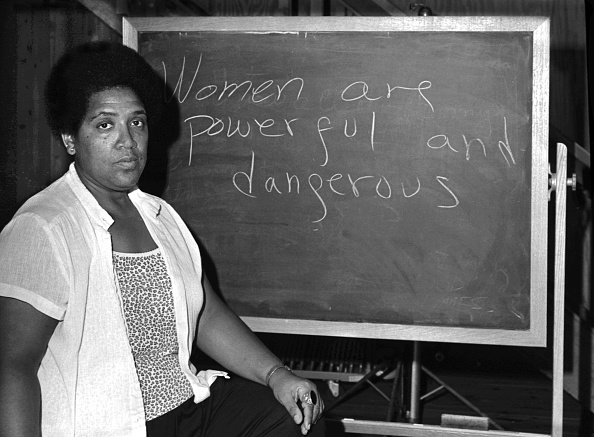 Today’s idea of self-care was born out of this radical concept from the civil rights era. In our current culture, women are expected to care for others — their families, their friends, and their — before they are allowed to care for themselves. That, combined with the stress of sexual discrimination, rampant misogyny, and racism for women of color, is why studies show that women have higher levels of stress than men. It is also why Black Americans report higher levels of stress than white individuals: they are faced with social stressors — like racism, police brutality, and discrimination — that white individuals are not.

Modern self-care is an attempt to undo this stress. It’s a movement that demands individuals put their health and wellness first, and let go of all guilt for doing so. Sharing those acts of self-care and declaring boldly that your needs, your body, and your health matter — whether on social media or in an essay like Lorde’s — is an even more radical act. false

But like most social movements of the digital age, self-care has become a huge industry, a $10 billion industry to be exact. And now that it has gone mainstream, it has started to lose some of its political significance. Does self-care really require a monthly box subscription, expensive spa trips, and an all-organic diet? Of course it doesn’t. While people should practice self-care however they choose, marketing these products as synonymous with self-care is dangerous and works against the original movement’s actual goals.

Making self-care a trend that comes with a big price tag dilutes its powerful message and shuts out the population of people who need it the most: impoverished populations struggling to make ends meet, people of color quite literally fighting for their lives, and women battling to the death for control over their bodies.

It’s important to understand the roots of this movement — first, as a tool of oppression, and later, as a weapon against it — because without understanding the reality of self-care, it cannot be effectively practiced or remain accessible for marginalized populations whose very lives could depend on it.

Despite its mainstream status, self-care is a radical idea, a weapon of warfare, and a way to fight back against the systems that threaten our health, body, and mind.

Let’s make sure it’s allowed to stay that way.