Sound expensive? Well, it actually isn’t. Reports reveal that the medical costs for transgender health care are negligible for the military compared to, say, the cost to create F-35’s and fund the military’s access to Viagra. Transgender medical expenses for American service members are actually pretty light — probably because trans healthcare doesn’t actually cost that much for the biggest military-industrial complex in the world.

Instead, Trump was pulling on transphobic talking points pushed out by the far-right to ban transgender service members from the military. The Family Research Council’s Super PAC, FRC Action, previously argued that tax dollars should be spent on F-35’s, rather than Chelsea Manning’s trans healthcare. And conservative radio host Bryan Fischer called transgender inclusion in the military a “logistical nightmare” in a 2016 column for Christian news website One News Now. He claimed that the military would “become the destination of choice for people seeking sex-change operations since they’ll be able to get taxpayers to foot the $30,000-$50,000 bill.”

Like Trump’s tweets in late July, there’s a pretty clear message here: Caring for transgender people is too expensive for cisgender Americans to afford. They make trans surgeries sound frivolous, and depict transgender people as deceptive.

For transgender people, medical care is no light matter.

Hormone replacement therapy can give transgender men, women, and non-binary patients the proper hormone levels they need to function on a daily basis. Genital reassignment surgery grants many trans people the affirmation and peace of mind they need to feel comfortable enough in their bodies to go about their everyday lives. HRT or GRS can mean the difference between life and death for thousands of transgender people, including the approximately 15,000 active duty trans people currently serving in the military.

Ask any trans person who has undergone medical transitioning, and they’ll tell you how their access to affirming doctors and care practitioners is necessary for them to live in peace. Many call these medications life-saving. As Diana Tourjee points out in Out, that’s because hormones allow many transgender people to deal with gender dysphoria, or “a condition of mental anguish due to a discordance between one’s internal conception of their gender and their physical sex.”

"It got to a point mentally with dysphoria where I knew either I had to start hormones or I was going to kill myself," a transgender man named Shane told Out. "There was no third option."

When President Trump said that trans healthcare came with “tremendous medical costs,” he was implying that gender dysphoria was too costly for the military’s medical expenses. Providing a suitable healthcare initiative for transgender troops— one approved by the American Medical Association — apparently isn’t enough for the President of the United States. That’s because Trump wants to send the message that trans people aren’t worth footing the bill.

But casting trans people as expensive isn’t just an attack on trans soldiers. It’s an attack on trans healthcare. And it’s an attempt to dehumanize transgender Americans, turning them into costly medical expenses that can simply be cut from a government budget.

Look no further than how this could impact transgender veterans.

As the Transgender American Veterans Association points out, official policy states that Veteran Affairs must cover “hormonal therapy, mental health care, preoperative evaluation, and medically necessary post-operative and long-term care following sex reassignment surgery.” That policy provides the basic backbone for transgender healthcare, mirroring civilian medical transitioning care plans. Some veterans worry that Trump’s transgender ban may put VA care in the crosshairs next — and that doesn’t even count transgender veterans who have access to medical care through Medicaid. Those veterans may suffer the worst of any future policy changes ushered in by Trump.

Unemployed, homeless, and poor transgender veterans could see their healthcare stripped away from them in incremental doses.

Others fear what will happen to active duty soldiers that are pushed out by the ban. When service members are discharged from the military with a less than honorable discharge, their benefits are impacted. That could mean no Veterans Affairs healthcare for the 15,000 trans people currently serving in the U.S. military if they are discharged. And it could mean recording a person’s transgender status, virtually outing any trans service member discharged from the military.

If that sounds familiar, it mirrors many of the discharges that happened to lesbian, gay, and bisexual service members during the “don’t ask, don’t tell” years. Trump may just repeat the same process all over again with the Defense Department.

It’s not just U.S. veterans that are in trouble, though.

When President Trump labeled transgender healthcare as an expensive medical burden, he gave ammunition for conservative activists and lobbyists. He changed the public discussion on gender transitioning, fueling the idea that trans bodies are cosmetic novelties that are too expensive to maintain.

Trump may continue to paint transgender people as costly for businesses, universities, and public facilities as the Justice Department continues to attack LGBTQ protections in the Civil Rights Act.

But there are ways to fight the transphobia in our government.

Transgender people can point to the facts on trans medical care and broadcast them during public discussions. The low cost of treatment, the psychological benefits provided by increased access to help, and the positive long-term effects of trans medical care are all great starting points.

Raising up the voices of transgender people inside and outside of the armed forces can help humanize the trans healthcare issue, too. In the New York Times’ podcast The Daily, Michael Barbaro sat down with Air Force Staff Sgt. Ashlee Bruce, a transgender woman who found her military colleagues to be highly supportive of her transition. Transitioning doesn’t actually cause disruption in the U.S. military, Bruce revealed. It creates unit cohesion, trust, and camaraderie. Those are all important qualities that can boost morale and efficiency for military operations.

It’s also important to show that trans care initiatives work well outside the military. Clinics like Callen-Lorde in New York City and the Mazzoni Center in Philadelphia provide transgender care to thousands of patients, including hormone replacement therapy and psychological care. These centers offer medical services on sliding scales, too, granting low-income and uninsured trans people access. If this was really such an expensive burden, then these community clinics wouldn’t be able to sustain themselves. They would simply close down — but that’s clearly not the reality of this kind of treatment.

Donald Trump and transphobic pundits want to dehumanize trans people. They want to say trans people are too expensive to exist. Doing that turns trans people into an abstract object, something malleable to be manipulated, destroyed, or used in political negotiations. Take away trans people from the military, and those “tremendous medical costs” are simply gone, Trump argues.

This attack on trans people is baseless and rooted in cruelty. 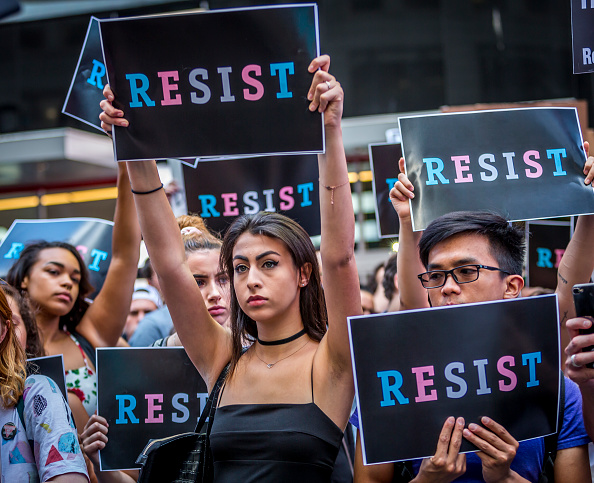 It’s a policy that, with its logical conclusion, would cause more than just exclusion from the armed forces.

An armed forces ban could spiral down to segregation across the government, or legalized discrimination throughout states.

Those are the kind of policies that lead to an increase in hate crimes and violence throughout the U.S.

It’s important to fight back against Trump’s military ban, on principle. An attack on trans people in the armed forces is an attack on trans bodies. And for trans Americans, that’s a fight we can only take up with our allies by our side.