After every single mass shooting, most U.S. legislators do everything they can to distract people from the actual root causes of the violence: guns and their extreme availability in this country. Why are they so opposed to facing and dealing with this stark reality? Well, it could be (read: definitely is) because more than half of the House of Representatives, for example, is effectively in the pocket of the National Rifle Association and so cannot change our gun laws in any meaningful way without seriously undermining the solvency of their own campaigns. The devastating school shooting in Florida this week was no different, but as much as the Trump administration might want to make us believe their hands are clean, Trump made it easier for people to buy guns within the first year of his presidency and his refusal to cop to it is pretty pathetic.

Once the Florida shooter was in custody, after killing 17 people, it was made public that he’s had problems at school, has been accused of hitting and stalking girlfriends, and was being treated for mental health issues. This led Trump to tweet his condolences while also subtly accusing people who knew him of not doing enough. “So many signs that the Florida shooter was mentally disturbed, even expelled from school for bad and erratic behavior. Neighbors and classmates knew he was a big problem. Must always report such instances to authorities, again and again,” he tweeted. His focus on the “mental stability” of the shooter and threading the tweet to one about immigration was a very slick way to *not* talk about guns.

Despite Trump’s finger pointing, the FBI confirmed on Wednesday that they had been contacted about the shooter, yet he was still able to pass a background check and purchase a rifle to shoot up a school.

There is no reason that should have happened — except there is a very real reason. No one in Congress will change our laws, especially Trump, who promised to be a “true friend” to the NRA during his campaign, which might be why he repealed an Obama-era gun control measure in his first months office that prohibited people with mental illnesses from buying guns. 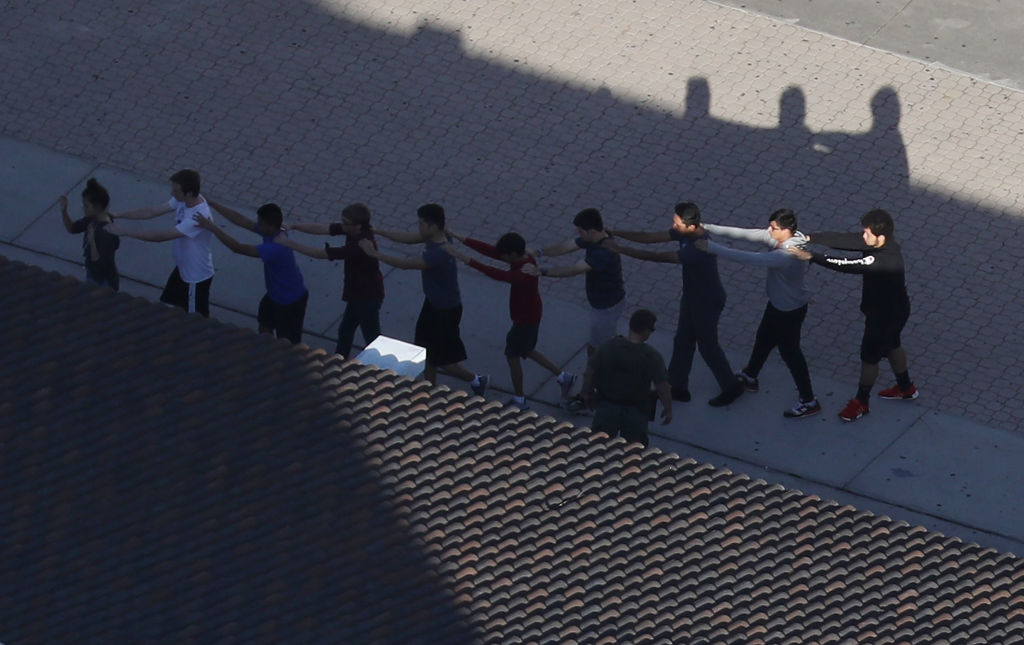 That law was not a perfect one to begin with. The American Civil Liberties Union and disability rights groups were working with the NRA to get Trump to block it since it was deemed unfair towards people with mental health issues. The law tapped Social Security Administration for information on patients who were unable to handle their disability benefits and forbid them from buying a gun. It affected about 75,000 people, according to NPR and likely wouldn’t haven’t prevented Florida’s shooting.

Just a reminder: People with a mental illness are not, by default, more prone to violence or destined to commit heinous acts if they purchase a gun, which is why civil rights groups opposed it.

Yet, we conflate mental illness and gun violence all the time, Trump included, even if his position on Thursday was confusing, given that he repealed a law prohibiting mentally ill people from buying guns.

After the Florida shooting, Trump talked out of both sides of his mouth by repealing that law last year to prohibit people with severe mental illnesses from buying a gun while also blaming mental illness and the lack of a “culture of kindness” for shooting.

By deflecting and not addressing the actual problem — again, our lenient and dangerous gun laws — Trump is telling the victims of the Florida shooting that he has no intention of being a “true friend” to us and keeping us safe as long as he can make deals with NRA leaders and calm any nervous GOP member in Congress afraid of losing their NRA backing.

On Thursday, Trump addressed the nation and made no mention at all about guns. Not one single utterance of the word. Instead, he focused on mental health, throwing a bone to the peanut gallery so that they can bicker and fight about whether mentally ill people are more violent or can have their right to bear arms revoked.

"It is not enough to simply take actions that make us feel like we are making a difference. We must actually make that difference. We are committed to working with state and local leaders to help secure our schools and tackle the difficult issue of mental health."

It’s hard to imagine what “actions” he took to “feel like we are making a difference” he’s talking about or what exactly he plans to do about addressing gun violence with an emphasis on mental health. Given his tendency to generalize and stigmatize people for their health, race, and class, we don’t even want to think about what he’d do to “tackle” mental health.

We don’t need to just “tackle” mental health when it comes to gun laws. What we need are more comprehensive gun laws that prohibit the kinds of guns people can buy, require more extensive background checks that make a domestic violence allegation an obstacle to buying a gun, for example, or enforcing waiting periods and counseling before buying a gun. We make people get counseled before doing a lot of things, like get an abortion or get gender confirmation surgery. If you want to buy an assault rifle, especially in a place where there are no wild bears to hunt, you should have to sit down with someone for an hour and explain why. Hey, we’re just brainstorming here, but there are tons of ways to block people from doing things in this country, and because the NRA has infested both the Democratic and Republican party, we just don’t.

But Trump willfully omitted the biggest point in his statement today when he didn’t even utter the the words “gun control,” just like when he repealed a law to please the NRA last year, he showed that he actually doesn’t want things to change. It’s not mental health or bullying that killed those 17 people this week, or the future victims of the next mass shooting, which is almost certain to come. It’s Donald Trump, every single politician who takes money from the NRA, and everyone who is too scared to actually talk about the real issues.