Troian Bellisario of “Pretty Little Liars” tells us about her new film, “Feed,” and how she hopes it impacts the conversation around eating disorders

Most of us got to know Troian Bellisario as the book smart, clever, and complex Spencer Hastings on Freeform’s Pretty Little Liars — and since the series finale aired at the end of June, we’ve been able to see more of Troian’s artistry than ever before. Earlier this month, Feed, Bellisario’s newest feature film, was released, and the project could not be more personal for the actor. Written and produced by the PLL alumna, she also stars as Olivia, Feed‘s main character. For Bellisario, 31, this film has been in her life for the past eight years; she began the writing process when she was 23 years old.

With a cinematic and visual narrative creating the feel of a thriller, Feed is inspired by Troian Bellisario’s own experience as an eating disorder survivor once hospitalized for anorexia. 18-year-old Olivia’s twin brother, Matt (Tom Felton), dies in a car accident. Drowning in her grief, Olivia copes by restricting food, spiraling deeper into mental illness and imagining that her brother has returned.

I sat down with Troian in Beverly Hills to discuss the impact she hopes Feed will have on viewers who don’t understand the reality of eating disorders, what it’s like to finally release this story into the world, and what she hopes to accomplish next. 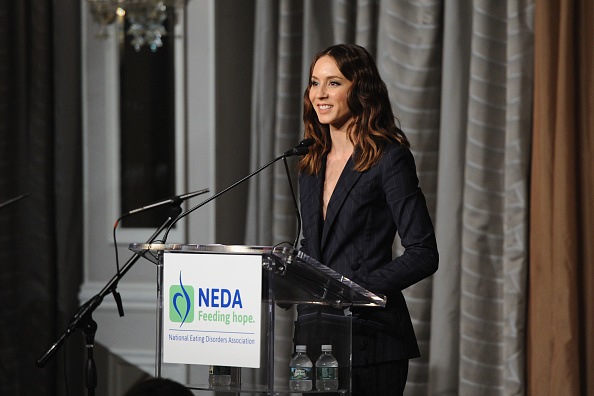 HelloGiggles: This is a script you started writing before you ever appeared on Pretty Little Liars, and now you have an established career. Over time, did all of your  industry knowledge and experience change how you wanted to tell the story?

Troian Bellisario: Definitely. The fact that this was my first feature film that I’d ever written — just being for 7 years on my show, [Pretty Little Liars], reading scripts and working with writers, watching the way directors work and producers work. It taught me a lot simply through osmosis, and then eventually getting to work behind the camera on the show as well. There were so many ways in which my show affected Feed — it was constantly evolving.

HG: The audience sees Olivia’s eating disorder physically manifest itself as her deceased twin brother — and that striking kind of visual manifestation isn’t something we’ve seen in films discussing eating disorders before. Can you talk about why you wanted to portray anorexia and eating disorders in this way?

TB: In my experience, there were a lot of people in my life that cared deeply for me and didn’t want me to suffer, and they wanted to help me. But they couldn’t understand why I was behaving the way that I did. For them, it was like, “Well, if you’re not obsessed with weight, why don’t you just eat?” All of these things that were just their misconceptions of what was going on for me. I thought that, if I were to use a film and tell a story, how could I help somebody who didn’t suffer from this illness get in the understanding of what it feels like? How could I make them understand that you love that voice, you hate that voice. That voice helps you get your life on track. That voice almost brings you to the brink of death and sometimes can kill you.

I knew it couldn’t just be a disembodied voice. It had to be a real character, and that’s the wonderful thing about film. I could establish the character of Matt, her brother, and hopefully have you fall in love with him and understand why she has such an intense bond with him. And then, if I took him away, and she was in a state of grief and suddenly he shows back up — you’re gonna listen to everything he says, and you’re gonna say “I’m gonna do whatever I can to keep you around, and you have my best interests at heart, and you love me and you’re my brother, and, oh my god, why are you asking me to do these things, is there any way out of this.” So that’s where it came from.

HG: In the promotion of this film, you’ve been so open about being an eating disorder survivor. What do you hope other survivors — and the audience in general — takes away from this film?

TB: There was a reason that I wanted to speak about it almost within the genre of a horror, a thriller. People who [already] struggle with this — I’m not talking  to them about anything new. But I think a lot of people don’t understand how fatal this disease can be, or the fact that eating disorders have the highest mortality rate of any mental illness. I really wanted people to see that it’s a fight for life and death. And treatment should absolutely be taken seriously because nobody should suffer alone. And what I hope is that, if people are silently struggling with an eating disorder, and they say “Oh my god, something about this film resonates with me, and I don’t want to live the rest of my life like this — I don’t have to live the rest of my life like this.” So I hope that it can inspire people to have a conversation with their family, with their friends, with a therapist.

Working on this film, I just started working with the National Eating Disorders Association, and they have an incredible website full of education with a toll free hotline where you can call, be connected to professionals, and get help — or help somebody else bring themselves to get help. It’s really important to me.

HG: You have a lot of on-camera projects coming up — but after writing and producing Feed, and directing an episode of PLL, do you plan to do more behind-the-scenes work?

TB: Definitely. It’s gonna be really challenging for me because this story was so personal, and I worked on it for so long to make it happen. Now, sitting down with another script, I’m just like “I don’t know, I hope it doesn’t take eight years!” (laughs) I feel really grateful that it’s out, and even just speaking with people who have seen it, it is massive for me. To only live with these characters for eight years, to suddenly have other people have a relationship to the film and have it impact them in their own lives, it is so amazing. It also feels like a freedom to let these characters go and see what else I want to write about. I have so many ideas, but every time I got to a weekend or got home from working on [Pretty Little Liars] and I wanted to write, I was like “Okay, well, it’s back to Matt and Olivia.” To have the freedom to say, “Where do I want to go next, what’s a story that I don’t have this connection to…” I’m really excited.

Feed is available on DVD and digital. If you are struggling with an eating disorder, you can get help from the National Eating Disorders Association by calling their helpline at 1-800-931-2237 , texting “NEDA” to 741741 if you are in a crisis, or chatting with their counselors online here.