How transgender literature can empower trans people who are coming out

October 11th is National Coming Out Day. Here, a contributor discusses her work on Resilience, a trans fiction anthology, and examines how transgender literature helped her come out as a trans woman.

I remember my first few months living as a woman. It was summer 2016. I’d started coming out to friends the summer prior, but that was when I really took steps forward. I began hormone replacement therapy, I changed my wardrobe, and I started presenting as a woman.

And believe me, it wasn’t easy.

Looking back, that summer was one of the toughest of my life. I had just graduated from college, and all the comforts of suburban family living were gone. I stayed at my college brownstone in New Jersey for the next couple months, stuck without air conditioning and barely getting by on a part-time administrative job. Add gender transitioning into the mix, and well, let’s just say money flew out of my apartment as fast as it came in.

Over a year later, I’m glad that summer is long gone.

But amid all that stress, I remember there was one book that kept me going during my coming out.

The book was Casey Plett’s A Safe Girl to Love. false

I picked up Plett’s short story collection early on in the summer. Once I began reading, I just couldn’t stop. Something about Plett’s characters made me feel at ease with myself. There’s the trans girl coming back home, one year into her transition; there’s trans women hurting other trans women; there’s the pitfalls and trauma that trans women experience when falling in love; there’s trans women feeling alienated and self-conscious in a world that pushes us against the wall.

Plett’s book was the first page-turner for me in years; ironically enough, I found myself running late for an appointment to my therapist once because A Safe Girl to Love was too busy reaching some sort of hidden, unearthed place in my soul.

For some trans girls and non-binary readers, Imogen Binnie’s Nevada has the same impact. Binnie puts the feelings of being a trans girl into words — constantly ruminating about the past, and feeling meek and indecisive after years of gender dysphoria. Nevada is the kind of book that blows trans readers’ minds, even the minds of trans women and femmes years into their transitioning.

How could a book so accurately describe the way we think, when it seems that no one else in the world knows crap about trans humans?

Trans women and non-binary people live in a world that doesn’t think all that nicely of us.

Who out there wants to love us? Take care of us? Treat us like humans worthy of affection?

For many trans people, self-hatred and self-disgust become powerful motivators to stay closeted. This is particularly the case for trans women living in rural or suburban areas where coming out is a painstakingly stressful process; everyone from your eye doctor to your fifth grade teacher quickly begins nosing into your personal life. It’s difficult coming out, and simply taking those first few steps can be extremely alienating.

It’s a way to bring closeted trans women and non-binary people together by depicting worlds where other trans people are out there, living their lives and getting by. And that’s one of the reasons why Heartspark Press has created the transgender literature collection, The Resilience Anthology. 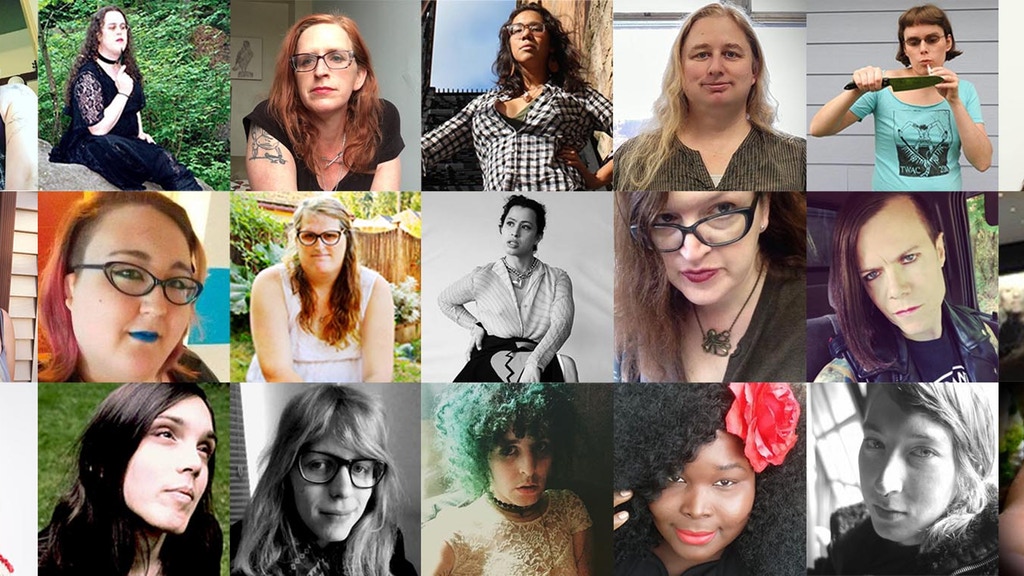 If the name Resilience sounds familiar, then you’re probably one of many readers who stumbled across our Kickstarter earlier this year. Not unlike Topside’s short story set The Collection or their science-fiction anthology series Meanwhile, Elsewhere, our anthology is a poetry and prose collection focused on trans lives. It’s an anthology that digs into how we think, feel, and behave in the age of Trump, and it features faces both new and old (including Plett herself). Resilience tells our stories, holding up our lives in a world that actively dislikes us for being, well, us.

I revised a story for Resilience called “1 AM.” It’s an older piece, one I wrote back in college when I first began taking hormones for my gender transition. It’s about the disjointed relationship I had with my body at the time. When I looked at myself in the mirror during my first six months on HRT, my softening skin, growing breasts, and changing facial features were too subtle to help me pass. While I was proud of the progress I was making, I also felt uncomfortable about the way my body looked. To the outside world, I still largely appeared to be a man, not a woman, and being misgendered left me feeling further dysphoric.

So, in “1 AM,” I depict a narrator who feels like an “artistic mess” when she looks at her body. On HRT, she’s becoming feminine and beautiful, but she’s haunted by her body not being quite what she wants it to be. Her Adam’s apple, breasts, and height leave her feeling uncomfortable in her own skin. Combine that with an unaccepting mother figure, and she feels shame and disgust when looking at herself. Sometimes, being trans is not fun.

Depicting all of that nasty baggage might seem odd for a fiction anthology called Resilience. But resilience isn’t only about staying positive, hopeful, or optimistic in the face of oppression.

Sometimes, being resilient is about being true to oneself — admitting how you feel about your body and admitting your insecurities. Being honest is an incredible feat.

The stories and poems in Resilience are not so much about being unashamedly trans as they are about being unafraid to lay oneself bare for other trans women, trans femmes, and non-binary people to see. The collection is about searching for meaning in a world that doesn’t really care about us.

For trans women and non-binary readers just coming out, trans literature can be life-saving.

Books can make closeted trans people feel heard, understood, and respected. Storytelling provides a sense of belonging for trans people living outside of the trans community.

That’s what we are doing with Resilience.

We want Resilience to speak to these readers, to tell them, “Yes, the way you feel is valid, and you aren’t alone.”

"I’ve frequently heard from people, ‘Why do people want to hear what you have to say? You’re a trans woman. That doesn’t apply to us,’" Heartspark Press executive publisher and Resilience curator Amy Heart said to The Stranger last month. "Maybe that’s true, but what about people like us who need to hear those voices, who need to hear from people like them? It would’ve completely changed my life if I heard that while I was young."

To be resilient, we must do more than write about our thoughts and feelings. We must also have the strength to open up so that younger generations of trans women can learn more about transitioning.

It means building a road forward and blazing a trail for future trans writers, the same way that Plett, Binnie, and others have done for us. There’s something empowering about that. In the face of everything, we go on. And the collection we’ve put together is a testament to that fact, even when things feel more dire than ever before.