When kindergarteners have school shooting drills, it’s time to talk about gun reform

Our contributor wrote this piece one year ago as a response to the Las Vegas mass shooting on October 1st. In 2018 alone, there have been 271 mass shootings—and we’re still having the same conversation about gun reform.

Sending my son to kindergarten for the first time was a scary experience. No longer my chubby-cheeked baby, he was heading out into a world where I couldn’t follow him. Instead, I had to trust that he’d be safe with his teachers and classmates.

Besides some tears on the first day, school was great. He was eager to learn. I was excited to hear about what he did everyday. So, when he came home and told me the school had a drill, I was all ears.

I expected him to recount his first fire drill. Instead, I was shocked to hear that he participated in a drill for something that, to me, was much scarier and more unpredictable than fire.

The drill was meant to prepare students and teachers in the case of a school shooting.

As he detailed the way he and his classmates hid under their desks while the teacher locked and blacked out the classroom, I was horrified. My kiddo was only 5 years old, and here he was excitedly telling me what he would do in case a gunman invaded his school. It made me sick. But this is our reality.

America has an epidemic when it comes to mass shootings.

Last night, on the Las Vegas Strip, one man with at least 20 rifles committed the largest mass shooting in modern U.S. history, killing 58 people and injuring 515. 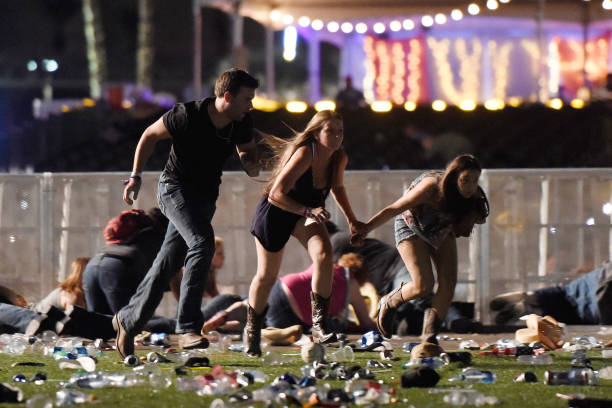 And there were six mass shootings this week alone.  A just released report by The Guardian details the 1,516 mass shootings that have occurred in 1,735 days. Whether it’s an elementary school, a theater in Colorado, or a night club in Florida, we aren’t safe. And we won’t be safe unless we take a hard look at our gun laws and change them to better protect the public.

But gun reform isn’t as easy as it should be.

The NRA, gun lobbyists, and Second Amendment enthusiasts stand in the way of any kind of true reform.

They see gun owning as an American right, but also don’t see guns as the issue — using the oft overused phrase, “Guns don’t kill people, people kill people. They donate millions and millions of dollars to politicians in order to earn their loyalty.

These anti-reformists also have a slew of disproven excuses as to why increased gun laws would be useless in stopping violence.

They suggest that terrorists and criminals don’t follow laws anyway, so they won’t be held accountable by new gun measures. This stance ignores studies that have found that restrictions on other dangerous items — such as bomb making materials — have resulted in less deaths by those means.

Also, anti-reformists insist that reducing access to firearms will leave potential heroic citizens unequipped during attacks, unable to stop massacres themselves. As optimistic as this opinion may be, independent studies using simulated firefights found that adding an armed civilian to the fray increased the overall body count. Either by accidentally shooting bystanders or getting identified and killed by the gunman, armed civilians only caused more bloodshed in these trials.

Though we have background checks that say who can purchase guns in the United States, our restrictions are very lax compared to other countries such as Australia and the UK. US background checks are free for the gun buyer and very easy to perform, with results coming back in mere moments at the place of purchase. If your name is not flagged, you’re able to purchase a gun with no other cross checks or restrictions.

During President Obama’s administration, small steps were taken to close some of the loop holes in gun laws. A large victory for anti-gun activists was legislation that made it illegal for recipients of Social Security with mental health issues to be able to purchase firearms. Unfortunately, that was one of the first issues that the NRA-backed current presidency overturned.

And following Trump’s repeal of the rule restricting gun sales to certain mentally ill people, the NRA and anti-reformists want even less restrictions on gun ownership.

For example, the NRA has lobbied Congress to ease laws on gun silencers — which they’d like to rebrand as “suppressors.” If the NRA gets their wish, gun silencers will be legal, thus minimizing the amount of noise that guns make when fired. This would then increase casualties as victims are given less warning from the sounds of gun shots. It would also make it harder to locate and stop the shooter.

States such as Texas, Georgia, and Kentucky have recently expanded their concealed carry laws to allow licensed citizens to carry handguns on college campuses. As previously cited, adding more guns to a mass shooting is the opposite of a solution.

It is painfully obvious that, even with all the statistics advocating for a stricter stance on gun ownership, firearm reform will be a struggle every step of the way. But if it means that children can spend more time learning their ABCs instead of hiding from mass shooters, then it will be worth it.

See how you can help survivors of the Las Vegas shooting here.