Okay, so, let me explain. I have a fear of big drops, which is normally a non-issue when I go to Disneyland, because most of the rides are so mellow (with maybe the exception of Space Mountain, which is just really fast and twisty-and-turn-y, but has no drops). While a lot of people love the sensation, drops make my organs feel like they’ve been tied together with twine and suspended in the air. Not a huge fan. So a month ago I was at the park for my husband’s birthday and we went on all the rides except for Splash Mountain, which has a 50-foot drop. You’re also in a log without seat belts.

To remedy my ride anxiety while waiting in the 90-minute line, I googled “Is Splash Mountain actually scary?” because there’s no better feeling than reassurance from the internet. I came across a Disney reddit thread that seemed to have permeated into my brain and extracted exactly what I was experiencing, even though it was posted five years ago. For the record, I was so nervous, I felt shortness of breath and abdominal cramps — my body was physically revolting, saying “Gina, GTFO. Get out of this line before it’s too late.”

Instead, I stayed and skimmed the thread, which comprised of 42 comments, all trying to comfort this uneasy Disneyland go-er.

Reddit user nvrwastetree wrote, “I am terrified of splash mountain [sic] and the drop that comes with it. To put it into a sentence we can all understand, I can basically ride everything in disneyland/world with absolutely no problem.”

For context, they write, "Space Mountain and Matterhorn are my two favorite rides. Space Mountain because I cannot see where I am heading because of the darkness; and The Matterhorn because I will always sit in the rear of the sled, but will refuse to ride if i [sic] have to sit up front. I am visiting Disneyland for the first time since 1998, and in all my 27 years of being alive, I cannot ride Splash Mountain."

“I get extremely nervous and anxious when I am 50 feet away from it,” they wrote.

They ask reddit users, “So how would I go [about] facing my fears??? I have previously thought about taking a couple Xanax pills in order to get rid of the anxiousness, but I want to be awake for the picture…help please!”

The good people of the internet provided thorough responses, some more helpful than others. 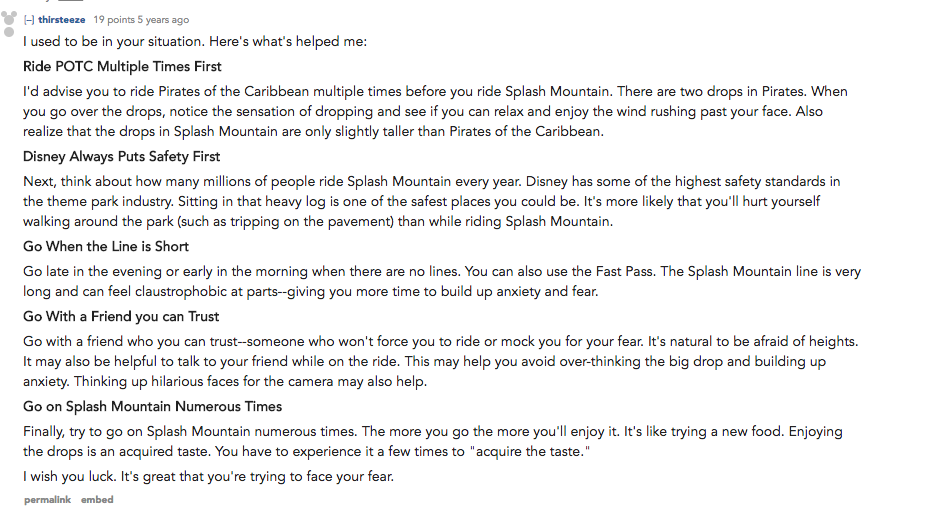 This user’s tips include:

1. Ride Pirates of the Caribbean first

2. Know that Disney is known for their safety standards.

3. Don’t wait in line for a long time because waiting psyches you out even more.

Another suggested to watch the video of the ride, which I also did in line for Splash Mountain. At this point I think I was in the shady cave part (in other words, there was no turning back).

The comment that convinced me I was going to be live was one from barca786. They poignantly noted that the drop was less than four seconds OF YOUR LIFE. They added, “The memories from the ride (especially the ride photo afterwards) could bring you joy for years.” I wanted memories! I wanted joy for years!

Anyway, I ended up going through with it, with the help of reddit. But dear readers, I’m never doing it again. The drop was as bad as I thought it would be, and seemed to last an eternity. The journey to the highest drop was no picnic, either. There are creepy animatronic animals yodeling and two drops leading up to the big one. And as our log was bobbing along the river, I thought to myself “I could literally climb out of this thing and take those stairs I see down to ground-level.” (Narrator: No She could not. Do not do this. This is how a log ride will kill you.)

And the beloved ride photo barca786 mentioned? Apparently, I was too busy trying to fold my body into the fetal position to strike a pose. (I’m the one in gray toward the back of the log.)

I don’t know if nvrwastetree ended up facing their fears, too. Either way, their willingness to put their anxiety out there into the world helped me confront my own.