In the 12th episode of This Is Us Season 4, “A Hell Of A Week: Part 2,” we witness a flashback scene between Rebecca (Mandy Moore) and a teenage Kate (Hannah Zeile). Rebecca is unsure about letting her daughter go to the family cabin alone with her boyfriend, Mark, after noticing some red flags like hearing Kate choking back tears while pleading that he not get mad at her, or seeing him ridicule Kate for wanting to watch Practical Magic. When Kate gets angry, Rebecca tries to comfort her, claiming she understands her situation. Unfortunately, Kate knows that she doesn’t—not really. “No you don’t, Mom, look at you,” she tells her. “You’ve had boys falling all over you for what? Your entire life? Mark loves me, and he’s the first guy to ever be interested in me. The first person to even look at me that way.”

Much of Kate’s narrative throughout Season 4, in both flashback and present-day scenes, has revolved around her romantic life. The scene between Rebecca and Kate is particularly heartbreaking because it reveals the nature of Kate’s tolerance of a boy who she knows, deep down, is psychologically and emotionally abusing her.

Unlike Rebecca, Kate is plus-size and pretty much always has been. For many, a reality of being fat in a culture saturated with anti-fat ideals is that, for much of your life, you will probably be made to believe that you have very little worth. You’ll likely be made to feel ugly, unloveable, and undesirable. You’ll become convinced that you should be grateful for any attention you get, which might just make you settle for relationships (romantic and otherwise) where you aren’t valued at all. As Kate tells Rebecca, Mark is the first guy to be interested in her. Despite his problematic behavior, she’s willing to try to make it work, because she’s worried that no one else will be interested in her after him.

It’s hardly an unfounded paranoia. According to data gathered for HBO’s documentary When Strangers Click: Five Stories From The Internet, men’s greatest fear when it comes to online dating is that their date ends up being fat. (Conversely, women’s biggest fear is ending up with a serial killer.) Unsurprisingly, many fat women can attest to putting up with less-than-satisfying relationships, like writer Autumn Whitefield-Madrano who wrote about an abusive relationship she stayed in while plus-size for BuzzFeed.

“The idea that weight would force a woman to settle for a lesser partner—an error in thought that you’d be forgiven for making, given how we frame thinness as the number-one prerequisite for classifying a woman as attractive—was a cousin to [my] truth, she says. “I knew that if we broke up, I could find someone else, if I wanted to. But would his desire for the body I had be as genuine as my current boyfriend’s?

Fat women, like Kate and myself, learn very quickly that our bodies are considered problems to be solved.

There are films, shows, weight loss ads, high school health classes, and magazine articles dedicated to that very notion. I’ll never forget being a chubby 10 year old watching Shallow Hal, a movie in which Jack Black’s journey to love Gwyneth Paltrow when she is wearing a fat suit is depicted as a legitimately challenging struggle. Even though he’s fallen in love with her inner beauty, her outer shell is just too repulsive; a body, which was not entirely dissimilar to my own. It’s no wonder plus-size Sierra Burgess, of Netflix’s Sierra Burgess Is A Loser, felt she had to catfish her crush so he could fall in love with her without actually seeing her.

Kate puts up with all manner of abusive behaviors from Mark, including body-shaming, jealous bursts of outrage, and gaslighting. He locks her out of the car in freezing weather when she says she won’t quit her job at the record store they both work at just because he did. Later, he locks her out of the family cabin in even colder, darker weather, until a desperate Kate busts through a window, cuts up her hand, and, once more, forgives him. 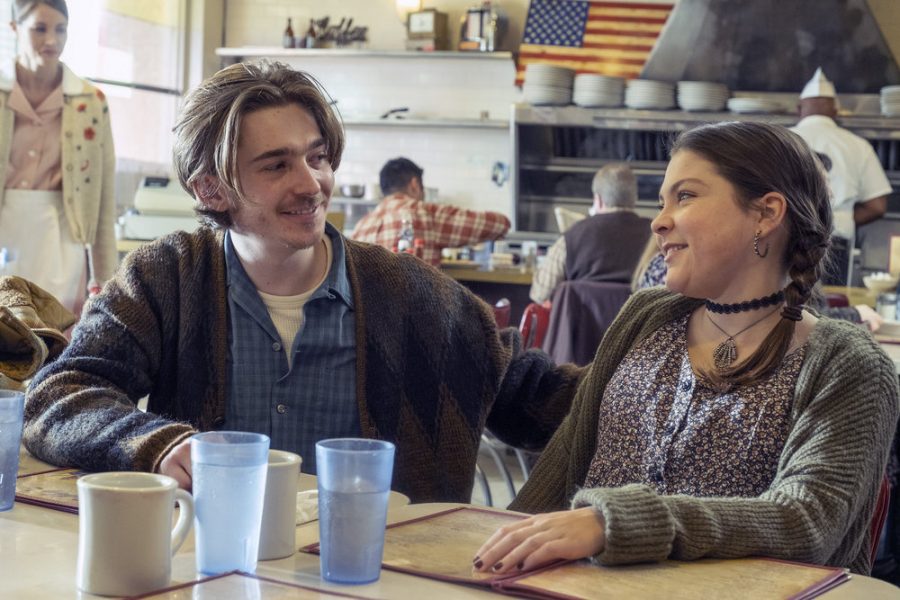 Given this foundation for relationships, it’s understandable that in the present-day, adult Kate (Chrissy Metz) is struggling in her marriage to Toby. Toby has lost weight, has a new circle of CrossFit friends, and isn’t spending much time at home—and she is terrified that he is no longer attracted to her. It is arguably her fear of being unlovable, or of being left alone, that prevents her from speaking her mind about her husband’s failings.

I can understand Kate’s fear. I remember the countless relatives who told me, as a child and teen, that I should lose weight so I could find a good partner. I recall stepping on the scale at school after losing a bunch of that weight through crash dieting. The nurse told me, “You must be so happy. I’m sure you’ll find a nice boy now.” I’ll never forget how many high school crushes never looked my way and how many of my friends assumed, and subsequently, made me believe, that it must be because of my size. There were times when I felt so low, so unattractive, and so nothing that I got myself into flings and relationships with people who were crude and unkind to me—only to be congratulated for doing so.

Like Kate, I felt that any attention, no matter how toxic, had to be better than no attention.

At the end of this same episode, Kate has had enough. In a poignant scene, she asks Toby, very frankly, “[…] Can you be the man that I need you to be? Can you be the father that Jack needs you to be?” Everything about her expression, her stance, her anger, and her frustration is powerful. She is no longer suffering in silence or accepting whatever comes her way, no matter how problematic it may be, for fear of being abandoned.

The scene between Kate and Toby meant a lot to me. Her level of fed-up-ness is one that I reached myself—as I got older and fatter, learned more about the toxicity of diet culture, found fat-acceptance advocacy, and started to like myself more and more. I started to believe that there were things about me that were good, both externally and internally, and so I must deserve good things, too. I learned to push back against mistreatment and unapologetically set my boundaries.

Kate stood up for herself, and was actually met with a partner who is willing to put in the work to do better and be better for her and for their child. That’s the kind of love she deserves: a love that values her, and knows how special she is, and that will fight to be the best version of themselves in return. It’s the kind of love all fat people deserve.

It doesn’t always feel like that kind of love is accessible—not when so many people, even people meant to care about you, can’t imagine that anyone could ever like a body like yours, just as it is. It’s worth pushing through the noise, though, or ignoring it entirely. In my earlier 20s, one friend actually told me the only boyfriend or girlfriend I was going to get if I stayed fat would be “a bum or a creep.” When I stopped treating my body like a problem and started sticking up for myself—a bit like Kate does when she’s talking to Toby—I opened myself up to a lot more romantic possibilities.

In not fearing my fatness, I could post about it publicly on dating sites so that everyone knew exactly what I looked like. And when I stopped treating my body like a work in progress or a fixer-upper, I actually found a lot more people (friends and loves alike) who thought I was just fine. More than fine, actually—worthy, lovable, and everything else I’d once thought so unfathomable.

If you are a victim of domestic abuse and need help, you can call The National Domestic Violence Hotline at 1-800-799-SAFE (7233) to speak to a trained counselor.