5 things you need to know about free bleeding

Maybe you’ve never heard of free bleeding before, or if you have, the term has appeared on your radar only recently. Put simply, free bleeding refers to a menstruating woman who is making the choice to abstain from using any sanitary products. That means no tampons, pads, panty liners, menstrual cup, etc. She bleeds naturally, as her body intended her to. Free bleeding has been slowly gaining traction at the forefront of women’s health and menstrual health discussions over the last few years, especially after the London marathon last year, when Kiran Gandhi ran while free bleeding.

Gandhi, Harvard MBA graduate, renowned drummer (she toured with MIA), and menstrual activist, took the world by storm when she decided to run the marathon without any feminine hygiene products. She wasn’t trying to cause a raucous; she just didn’t want to wear a freakin’ tampon. “When I free-bled at the marathon it was the first time I had ever done it,” she told Broadly. “Once we crossed the finish line I couldn’t really believe it—we hadn’t stopped running once, and free-bleeding ended up being the best and most comfortable decision.”

Before that, there had been whispers of free bleeding, but not in such a positive, empowering context. In 2014, there was an anti-feminist hoax on the website 4chan called Operation Freebleeding. It was a misogynistic, offensive piece of anti-free-bleeding satire that reminded us just how much period taboo we still have to live with in today’s world.

Since then, though, with the help of women like Gandhi, we’ve been talking about free bleeding more and more, in useful ways, and it’s becoming one of the most important menstrual health conversations. Here are five things you need to know about free bleeding.

1. Free bleeding has been done for centuries throughout history

As funny as 4chan thought it was to poke fun at the notion of women menstruating organically without anything blocking their natural bodily functions, it’s something that has been done for centuries, long before any of us were even considerations in the universe. (Come on, you think Queen Cleopatra had a neat stack of Tampax lying around?)

In the 17th century, the majority of women used nothing at all when they were menstruating. The wealthier women would cut up rags to stop their flow, but it wasn’t common. In fact, it’s a practice that goes back so far it’s difficult to properly trace. The point is, women have been handling this bodily function for countless generations on their own, without the help of tampons and pads. Yet now it’s considered gross to some, due to all the  period taboo surrounding us (something we’ll get into below).

2. Women free bleed because they find it much more comfortable

Any person who has ever had a period can tell you that menstruating isn’t exactly a walk in the park. There are so many parts of it that are uncomfortable, from the menstrual cramps to the bloating to the occasional headache. Having to deal with tampons and menstrual cups — running to change them every few hours, dealing with the discomfort — can be a real pain.

Gandhi spoke about the choice to free bleed, noting that it was a much more comfortable alternative, especially considering the amazing physical feat she was about to accomplish. Other women have spoken up about free bleeding in the comfort of their own home. A 31-year-old woman Marla from Los Angeles told Broadly, “Whenever I would get home from school or work, I would immediately slip into a pair of loose, dark pants and just bleed. I still do that.” She’s reluctant to tell friends and family, but she just finds constant tampon use to be invasive and irritating. The first time she ever read about free bleeding was from reading Cunt by Igna Muscio.

Others have taken to the internet, writing blog posts about their decision to free bleed. They say it doesn’t make them lazy or unsanitary. They wash their sheets and clothes and take care of themselves. Most importantly, they’re simply letting their bodies do what they were naturally born to do, without the disagreeable products given to them by society.

American women throw away about seven pounds of feminine hygiene products every year. Say there are 100 million menstruating women in the States. That equals around 700 million pounds of products (tampons, pads, panty liners, etc.) each year just in this country. After Gandhi ran the marathon last year, she started speaking up more about these environmental concerns. She said, “Women’s bodies have never been burdensome to the Earth, and the products we use to care for ourselves should not be either.”

In interviews and panels, Gandhi was also quick to point out that one of the reasons we don’t have more sustainable products available to us is because we aren’t given the freedom to speak freely and openly about our menstruation experiences. But with products like new period underwear Thinx on the rise, we might be able to significantly reduce the environmental damage our products are causing the earth.

4. Women are talking about free bleeding more in an attempt to reduce period taboo 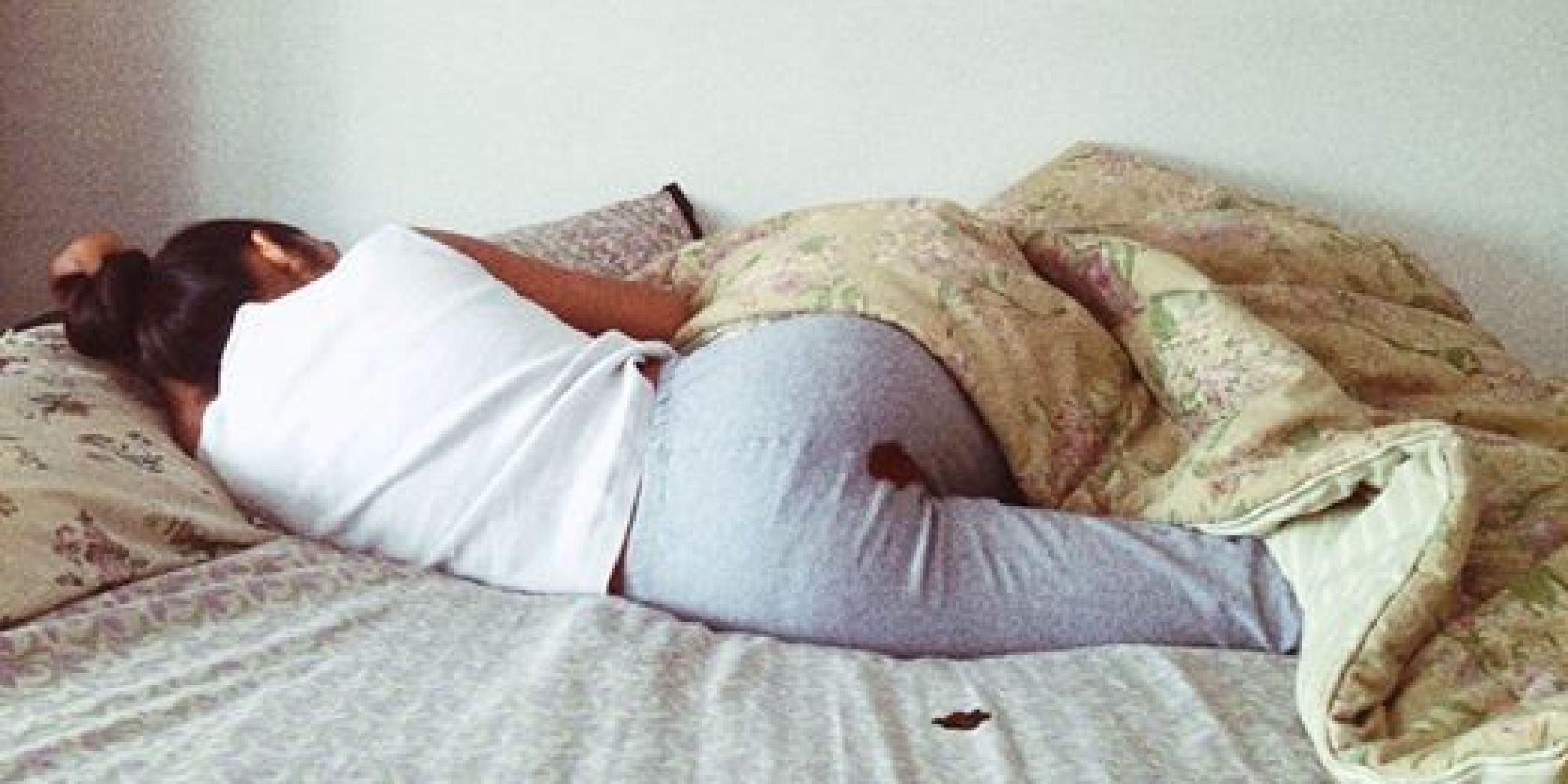 “I think this is an imperative conversation to be having as menstruation becomes less of a taboo in US culture,” Rachel Kauder Nalebuff, author and editor of My Little Red Book, told Broadly. She and many other menstrual activists believe that the attention given to free bleeding will only help us sift through the menstrual taboo that is hindering our society from properly caring for its women.

2015 was dubbed the Year of the Period by NPR, and for good reason. We’re finally talking about our periods in a bold way and we’re not backing down. Free bleeding is just one of the many ways we’re shedding light on women and their periods, even if it initially makes some people uncomfortable. Rupi Kaur (photographed above) has been an important figure in chipping away at the taboo. Kaur is a poet and artist who posted this picture on Instagram last year. It was taken down multiple times by Instagram, an act that infuriated many women who found this photograph to be beautiful and honest. Kaur has since posted it on all her social media accounts, and this time it’s here to stay.

5. Women free bleed to raise awareness about the lack of feminine hygiene products available around the world

We may take for granted how easy it is to get our hands on tampons and pads whenever we need them, but that’s not the case for so many others. Countless homeless women and girls living in low-income neighborhoods in the U.S. suffer greatly each month because feminine hygiene products are far too expensive for them. Many women have to miss work or school. Others do their best to stay hidden from the public.

Overseas there are 66 percent of girls in Southeast Asia don’t even know what menstruation is until their first period, leaving them with no information on how to care for themselves. 12 percent of women in India use the products we’re familiar with. In many African countries women use twigs and sticks to try to control their menstruation. This often leads to infection and disease.

Free bleeding allows us to think differently about menstruation and consider how this natural bodily function affects women differently all over the world. The most important thing to remember is that while we may have the choice to free bleed, many others don’t.