5 things you may have not realized are cultural appropriation

There are so many cultures around the world that we’re curious about. While it’s perfectly okay to be interested in the way others live, there’s a way to respect someone’s ethnicity without crossing over into cultural appropriation. Unfortunately, we’ve seen a lot of instances lately in the media — and in everyday life — that show how little we actually understand what cultural appropriation is all about.

The definition of cultural appropriation is cherry picking parts of another culture to use for your own pleasure without understanding their meaning or participating in the ritual that comes along with them. For example, if you include traditional garb or markings like a sari or bindi from Indian culture in your outfit just because you feel like it, that’s cultural appropriation. Another prime example is wearing a Native American costume for Halloween.

There are some subtle ways you might be culturally appropriating and not know it, though.

Here are five things you didn’t realize were cultural appropriation.

It’s fun to experiment with your hair, and there’s nothing wrong with that. However, it pays to be conscious about what kind of styles you’re using and where those styles come from. For example, getting your hair done in cornrows or an afro is disrespectful to black women who have been discriminated against for years (even fired from their jobs!) for wearing their hair in these ways.

Black men and women originally invented these styles because it was the best way to take care of their hair, not because they were trying to be edgy or trendy. Many white people have appropriated these hairstyles, though, in an attempt to look more urban and fashionable. But they don’t have to live with any of the stigma that’s attached to being black in America.

You’ll often see or hear people jokingly talk about their “spirit animal.” That’s a very offensive form of cultural appropriation, though, because there is a significant meaning behind the idea of a spirit animal, one that is deeply rooted in indigenous cultures.

Before you use this term to talk about an actress you love or a kind of food you like, be more mindful of the fact that many populations, including Native Americans, were forced out of their home by white people, and they’re the ones whose culture holds a real place for spirit animals.

3Wearing headdresses or bindis as part of your outfit 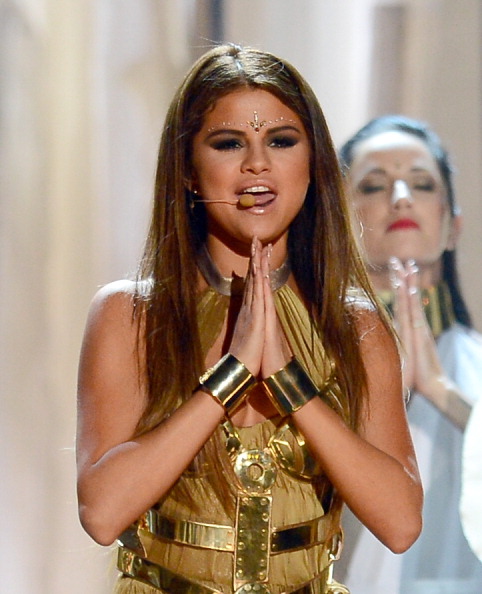 Many celebrities have been called out for this. Pharrell Williams donned a Native American headdress on the cover of Elle UK, and after subsequent backlash, he issued a sincere apology and promised that he would be more sensitive to this kind of cultural appropriation in the future.

Selena Gomez has been known to don a bindi, a decorative dot on the forehead that originates in India, in several of her performances. Despite much heated commentary on the topic, she never spoke out about it and continued to wear them.

Although these are beautiful pieces of another culture, we have to remember that these marginalized communities don’t exist so we can derive fashion choices from them. They deserve to be seen and respected as whole, nuanced societies — and if we’re going to honor their cultures, we sure as hell better pay attention to the ways they are discriminated against on a daily basis.

4Speaking in an accent that’s borrowed from black culture

You’ve probably heard plenty of people take on a “blaccent” in an attempt to be funny or be cool. But make no mistake — it’s cultural appropriation. Black people have faced many generations of discrimination and prejudice in our country, yet many people fail to acknowledge or do something about that fact. They instead borrow an aesthetic from black culture and use it for their own entertainment. It’s reductionist and harmful to us all.

5Putting chopsticks in your hair

Asians often get hit with hurtful stereotypes, and this is yet another example of a rich culture being reduced to a trend that is as inaccurate as it is offensive. Don’t ever let someone tell you that wearing chopsticks in your hair is a celebration of Asian culture, because there isn’t any tradition in Asian countries where you would wear chopsticks in your hair. There are hair sticks that are traditionally put in your hair, but that’s not the same thing.

Cultural appropriation isn’t only a burden for people of color and marginalized communities to carry. We should all be concerned about potentially appropriating other people’s cultures, and we should strive for a society that is driven by respect and understanding, not ignorance and disregard.