Things I needed to hear growing up as a black girl

I had a lot going on when I was younger. (Spoiler alert: I still do.) I switched high schools as quickly as the weather changes, and struggled through almost every year. Like most kids in the 2000s, I turned to TV and the internet for comfort. I searched long and hard for black girls who were hurting the same way I was, but I couldn’t relate to anything I found.

The “strong black woman” stereotype is dangerous. While black women are incredibly strong, I grew up in a world that told me that I couldn’t be anything else. false

This can lead to several physical and emotional health problems going unnoticed, or dismissed as something else entirely.

I couldn’t be black and depressed, because my school psychologist told me that black girls have attitude problems – not mental health struggles.

Representation matters, and it matters for everyone.

When I was in high school, I so desperately wanted to be a model. A group of my friends – mostly white girls – and I entered a competition to be the face of a magazine. At the casting, there were pictures of the previous years’ winners and the current cover girl. They all had the same gorgeous “Taylor Swift look” about them. It was clear to me what they were looking for. I left, heartbroken, because I knew I could never be them. I could never be blonde enough,. My eyes would never be blue enough. I could never be white enough to be a model. 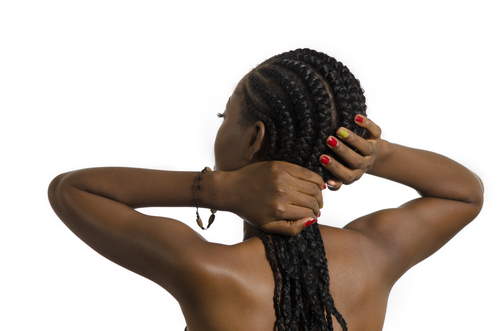 When I look back on these moments, I think of what I wish someone had told me when I was a younger black girl.

There is so much I needed to hear. I can only imagine the strides I would have made in recovery and self-love if I knew that I could.

So, past Shalom (that’s me), and present and future black girls, listen up.

Your blackness is a part of you. You should never have to tone it down, or get as close to being white as you can in order to feel pretty, or feel that you have a chance at success. Your problems are serious. Never let anyone tell you that your mental health doesn’t deserve real concern – it does. It always has deserved it.

You are magic. You can be confident. You are not obnoxious or rude for defending yourself. Your body doesn’t look like the bodies on TV. You have darker skin and spots and scars on your legs, and you are magic. You are a beautiful kind of magic that nobody can take away from you. I’m sorry that you don’t see people who look like you doing what you want to do one day. You can be those people. You already are. Your skin is that of conquerors and presidents and models. You can do anything.

They are magic – let them believe it.

Shalom Obisie-Orlu is a blogger at okayshalom.com, and is passionate about girls, mental health, and changing the world. She calls South Africa — and soon, New Jersey — home, and has never met a strawberry she didn’t like. Her hobbies include making magic & dismantling the patriarchy. Keep up with her on Instagram and Twitter @okayshalom.