My therapist helped me come out as queer

“You know, it’s okay to not be straight.”

My therapist said this to me during one of our sessions a few months after I’d started seeing her for my anxiety and depression. I shook my head in shame and replied, “So much easier said than done.”

Deep, deep down, I’ve known that I wasn’t straight since high school. I remember watching Season 2 of The O.C. when Marissa starts dating Alex, played by Olivia Wilde. I was 14 at the time, and as I watched my friends start to date their first real boyfriends, I sat on the sidelines. But every Thursday night, I’d tune into The O.C. and bask in the glory that was Olivia Wilde. I watched their kissing scenes over and over again, secretly wishing I could have a relationship like that — except I grew up in a really small Wisconsin town where I didn’t know any women who identified as lesbian. My uncle and a close guy friend identified as gay, but that felt different. Being queer never seemed like a possibility for me.

So I continued to tell my friends about my “crushes” on various boys, even though I had no desire to date any of them.

During a high school dance when I was a sophomore, my friend strongly encouraged me to dance with a boy in our class. Grinding was the big thing at the time, so of course that’s what he wanted to do with me. I was so uncomfortable even though he did absolutely nothing wrong — I wanted to hide away in a corner. That discomfort remained throughout the rest of high school — I didn’t really date anyone and told my friends that I was just too busy with school and extracurricular activities to have a relationship. Fortunately, it was a believable lie that everyone bought.

I continued to repress my feelings in college and used the same excuses — I was too busy for a relationship. I stacked my days and took on multiple internships so I wouldn’t have to deal with the emptiness I felt. I became jealous of my friends with boyfriends and took out my frustration on them. I’d enviously look at their relationships, wishing that I could either be physically attracted to men or finally be with a woman. I got drunk multiple times a week to make out with guys since, in my drunken state, I wasn’t as uncomfortable with it. That way, I could at least participate in my friends’ conversations about hookups the next morning. I graduated college having never been in a real relationship, which was really hard to deal with. I felt broken. 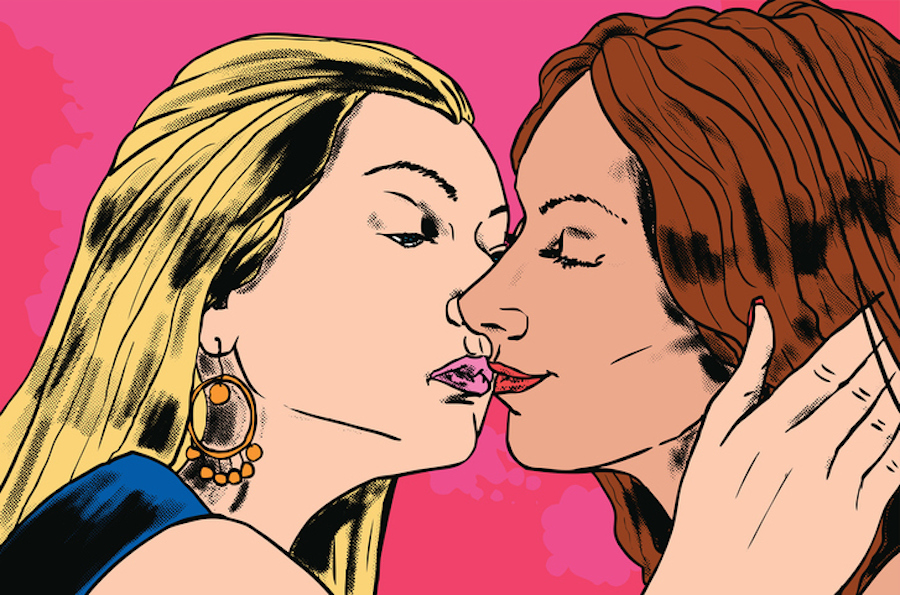 I moved to Los Angeles after college, and I was suddenly able to meet all different kinds of people — including those who identified as lesbian or bisexual. It was so amazing to me that women were in same-sex relationships and didn’t have to keep it a secret. I felt so at home but still kept my own sexual desires hidden.

I went out on numerous dates with men and tried, again, to force myself to feel something for them. Then, after a few months of living in L.A., I decided to set up a new OkCupid profile — and identified myself as bisexual. I would log on and just swipe through women, finding it so much more enjoyable than swiping through men. But when a guy I’d previously gone on with found this new profile and messaged me, I completely freaked out and deleted my account before I even read his message. To this day, I wonder what his message said, but at the time, I felt like I’d been caught red-handed. I was ashamed.

My secret identity was revealed, and it scared me. I didn’t want to have to label myself and tell my friends and family — especially those still in my hometown — who I really was.

A few months after I started therapy, I became really comfortable with my therapist. I felt that it was time to confront these feelings and work through them. I told her about my discomfort with men, and we spent multiple sessions trying to figure out why that may be. I still wasn’t ready to share my physical attraction toward women, so I continued to tell her that I was interested in men but struggled with this fear when it came to dating and sex.

But she pushed me so I could discover the real truth.

We spent months discussing my fantasies with women and my jealousy toward women in same-sex relationships. I admitted that those feelings freaked me out, and I was ashamed of that. I live in a city that is so accepting, and I am always so happy for my friends who come out. I never once thought it was wrong for someone else to be gay, but when it came to myself, I just couldn’t accept it. Was I not an accepting person after all? It made me question my core beliefs. Was I actually homophobic?

My therapist assured me that I wasn’t a bad person and introduced me to the concept of internalized homophobia.

Revel & Riot (a nonprofit LGBTQ organization) says that internalized homophobia develops when “LGBQ individuals are subjected to society’s negative perceptions, intolerance, and stigmas toward LGBQ people, and as a result, turn those ideas inward believing they are true.” She said it was natural for me to have these feelings since I grew up in a conservative small town. For weeks, we worked through deconstructing this belief and understanding my inner self. It was hard work that left me emotionally drained.

My therapist also repeatedly told me that I didn’t have to label myself, that sexuality isn’t always black and white. She encouraged me to go on a few dates with women to see how it feels; I wouldn’t be able to emotionally move forward until I explored these feelings in real life situations. A week later, I signed up for a speed-dating event, and I actually had a lot of fun — I even went on a dinner date with one of the women I met there. And had a really good time.

I couldn’t wait to share my progress at my next therapy session. My therapist’s face lit up when I told her about my date, and she congratulated me for jumping in head first. But she also reminded me that it was okay if I still felt uncomfortable and needed to slow things down.

My therapist guided me through the emotions of a second date and the possibility of physical intimacy, something that still terrified me. I didn’t feel any romantic chemistry with this particular woman, so I signed up for all of the apps and soon met a woman who I was strongly attracted to. Our amazing first date made me feel like I was 15 years old and experiencing my first real crush. It left me on cloud nine.

I decided it was the right time to tell all of my friends that I was dating women, and continue dating women for the time being.

I have even come out to my parents, which was a conversation I’d been dreading. Before I did it, my therapist and I discussed what I’d say and how I’d cope if their reactions weren’t positive. Despite my very close relationship with my parents, I still worried they wouldn’t be supportive or understand — especially since they’ve lived in small towns for the majority of their lives. Fortunately, they were supportive and told me they just wanted me to be happy. I know this isn’t always the case for people who come out, and my heart aches for those whose families have let them down.

I truly believe that I would have never come out if my therapist hadn’t guided me toward my authentic self. Every day, I am grateful to her for pushing me to admit what I want out of a relationship. She continues to remind me that I am the only person who can decide how I feel and how I want to label myself. It’s okay if I decide to try going out with men again, and it’s okay if I end up in a long-term relationship with a woman.

Sexual identity isn’t black and white, but that’s what I grew up believing. It’s fluid and always changing, and that’s a good thing. I’ve decided to label myself as queer for now, and I’m excited to spend the rest of my life exploring my feelings and dating people I am emotionally and physically attracted to, no matter their gender. I have also decided to stay with my therapist for as long as I can because I know she will continue to help me work through the joy and pain that comes with living an authentic life.