Sure, it’s been over a month since La La Land killed it at the Oscars, but we’re still thinking about it. How can you not? The amazing acting, flawless score, and the dancing. So much dancing.

And we’re not the only ones, apparently. Case in point: an Arizona teenager just asked Emma Stone to prom with an epic promposal that would win all the YouTube Oscars, if such a thing existed.

There are two reasons why we think Stone miiiight just consider accepting this offer from tux-clad, bouquet-toting Arcadia High School student Jacob Staudenmaier. One, the school is located right outside of Scottsdale, which is where Stone was born and raised.

And two? The way he asks is a full-length parody of the opening scene in La La Land, set to the music of “Another Day of Sun” but featuring Jacob’s own lyrics.

“The Valley of the Sun” (a clever usage of the Phoenix metropolitan area’s nickname) comes complete with a “traffic jam” and people dancing alongside cars — expect in this version, folks are also holding up signs that say things like “OLIVE GARDEN,” which we think the comedically adept Stone would totally appreciate.

Other unique touches? A guy in a jersey running around waving an Arcadia High School flag, and about a dozen others prancing around with “PROM?” signs.

“People say I look like Ryan Gosling, and maybe that’s a bit far-fetched,” Jacob sings at one point — though tbh, we actually totally see it. 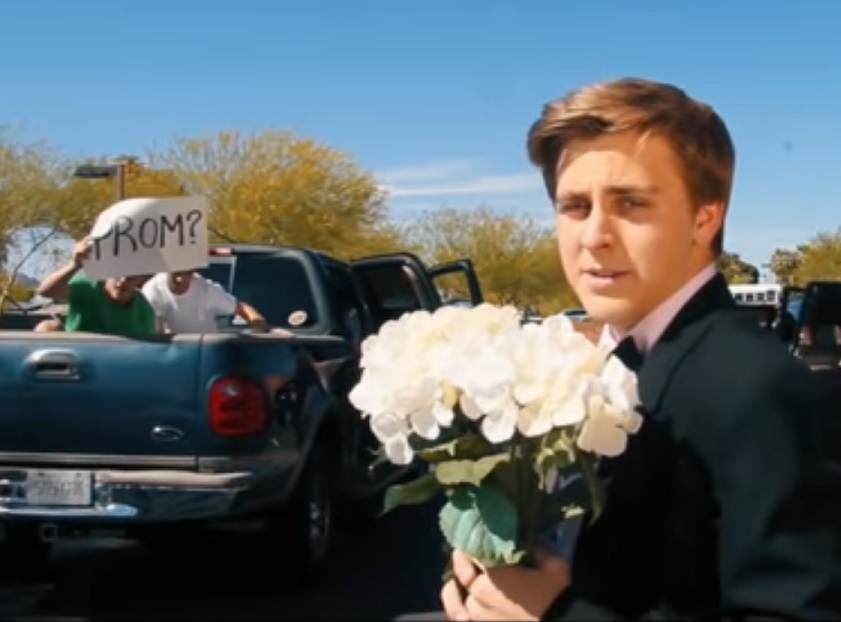 We are kind of obsessed with this video, and whether Stone accepts or not, we know she’d appreciate the heck out of it too. It’s one of the most creative and committed promposals we’ve seen, and we’re wishing Jacob all the luck.