The previous princess of country and current queen of pop, Taylor Swift, knows her way around the Grammys red carpet. The singer has been nominated for 35 Grammy Awards since making her Grammys debut when she was up for Best New Artist back in 2008. Just two years later, she won Album of the Year and Best Country Album for her sophomore album, Fearless, and the rest, as you know, is history.

During the past 12 years, Swift has only missed three Grammy Awards red carpets, and she’s been nominated for at least one award every year that she has attended.

When Swift shows up at the Staples Center, home of those coveted golden gramophone trophies, she dresses to impress. Her last appearance at the Grammys was in 2016 when she won three Grammy Awards, so Swift’s triumphant return four years later is exciting indeed. In honor of the 2020 Grammys this Sunday, January 26th, we’re taking a walk down red carpet memory lane with Swift, noting our favorite looks of hers from the past 12 years of Grammy Awards. We’re seriously excited to see what she’ll wear at the 2020 Grammys, and our fingers are crossed that she’ll take a trophy home, bumping her number of Grammy Awards past 10. See all of Taylor Swift’s Grammys red carpet looks below. 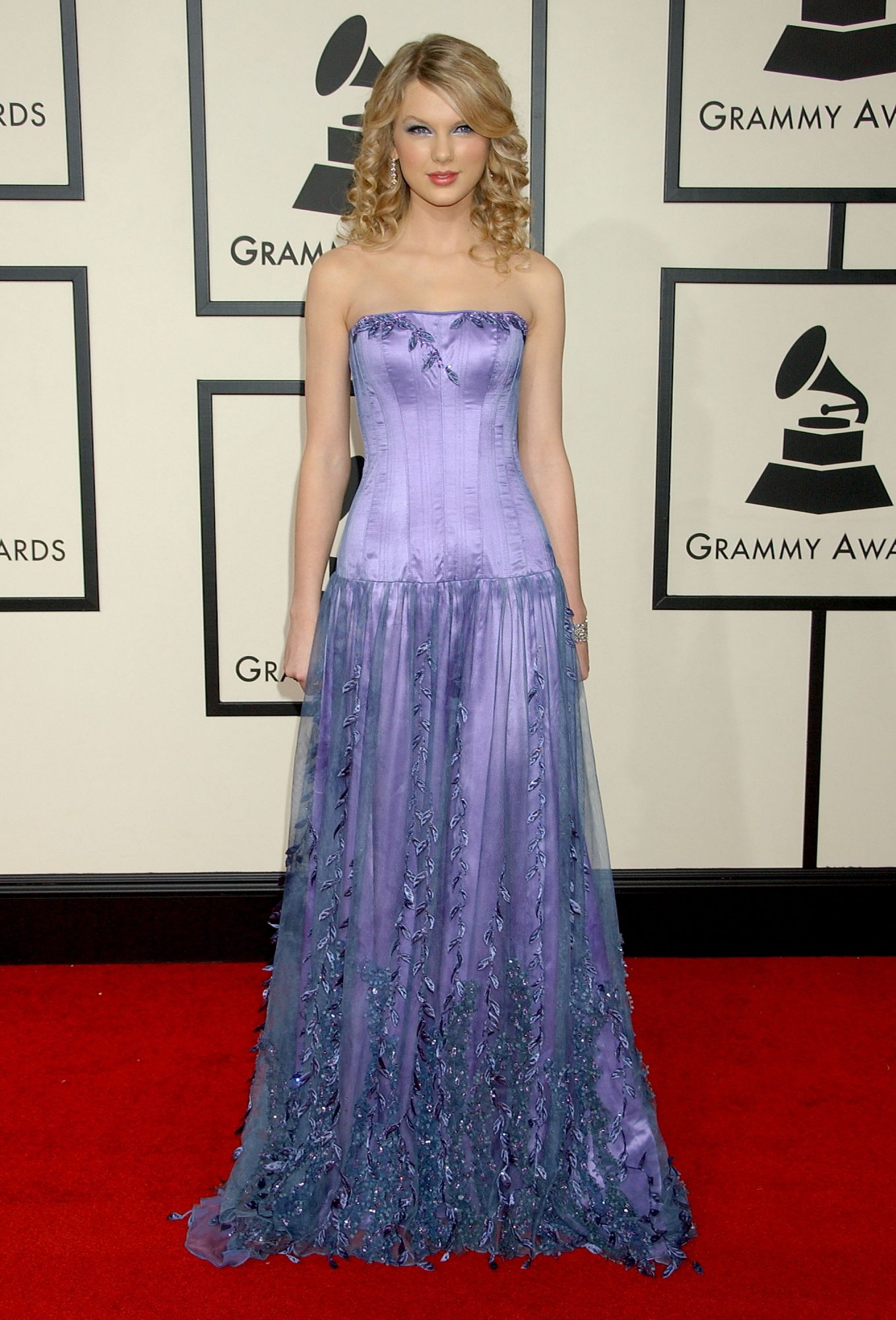 At her Grammy Awards red carpet debut, Swift opted for a romantic lavender gown, which aligned with her entire vibe back then—you couldn’t catch Tay in a music video sans corset ballgown, her signature blonde ringlets bouncing behind her. 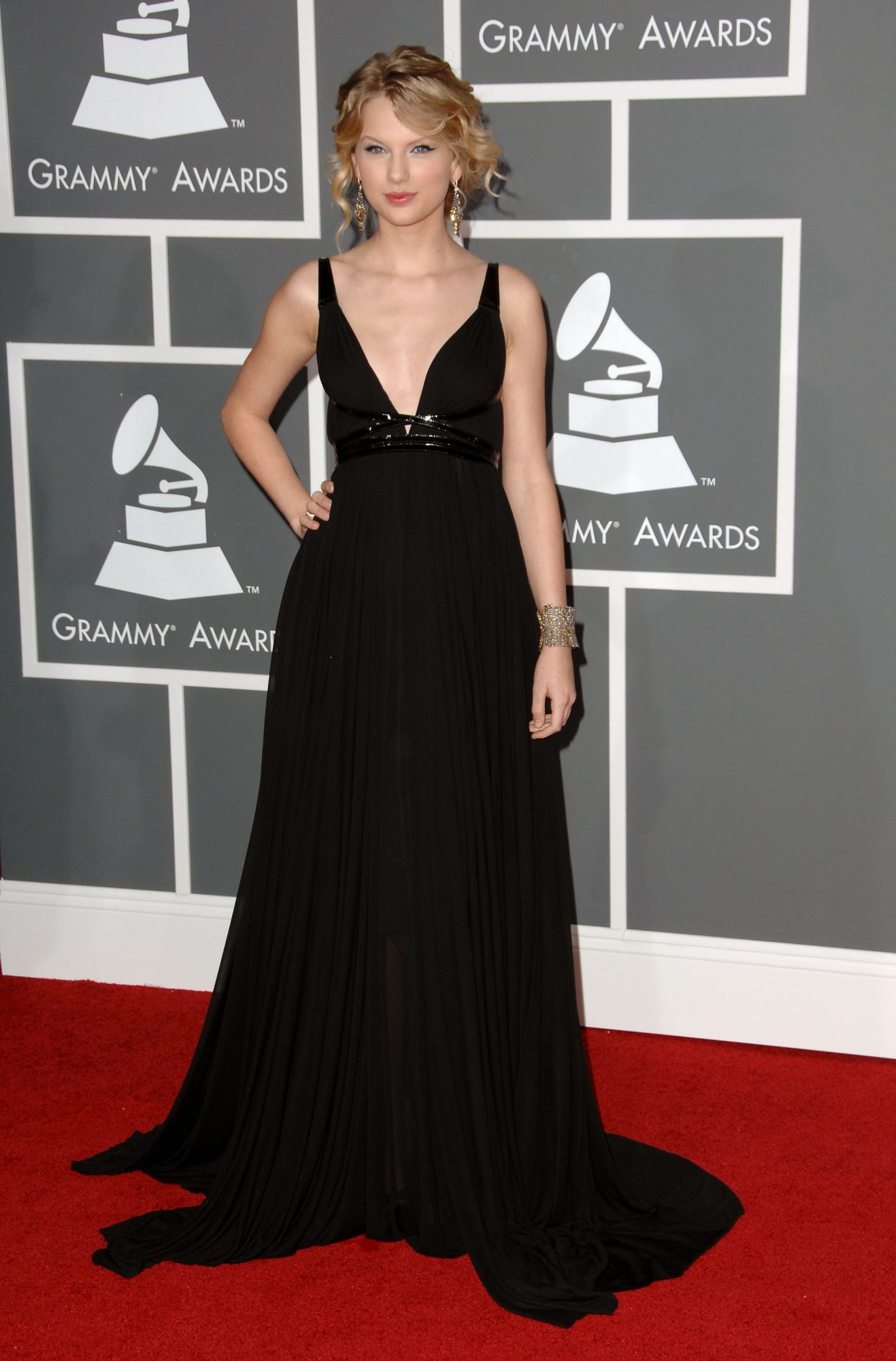 At her second Grammy Awards, Taylor elevated her look in a sleek black dress with a plunging neckline and an elegant but relaxed updo. 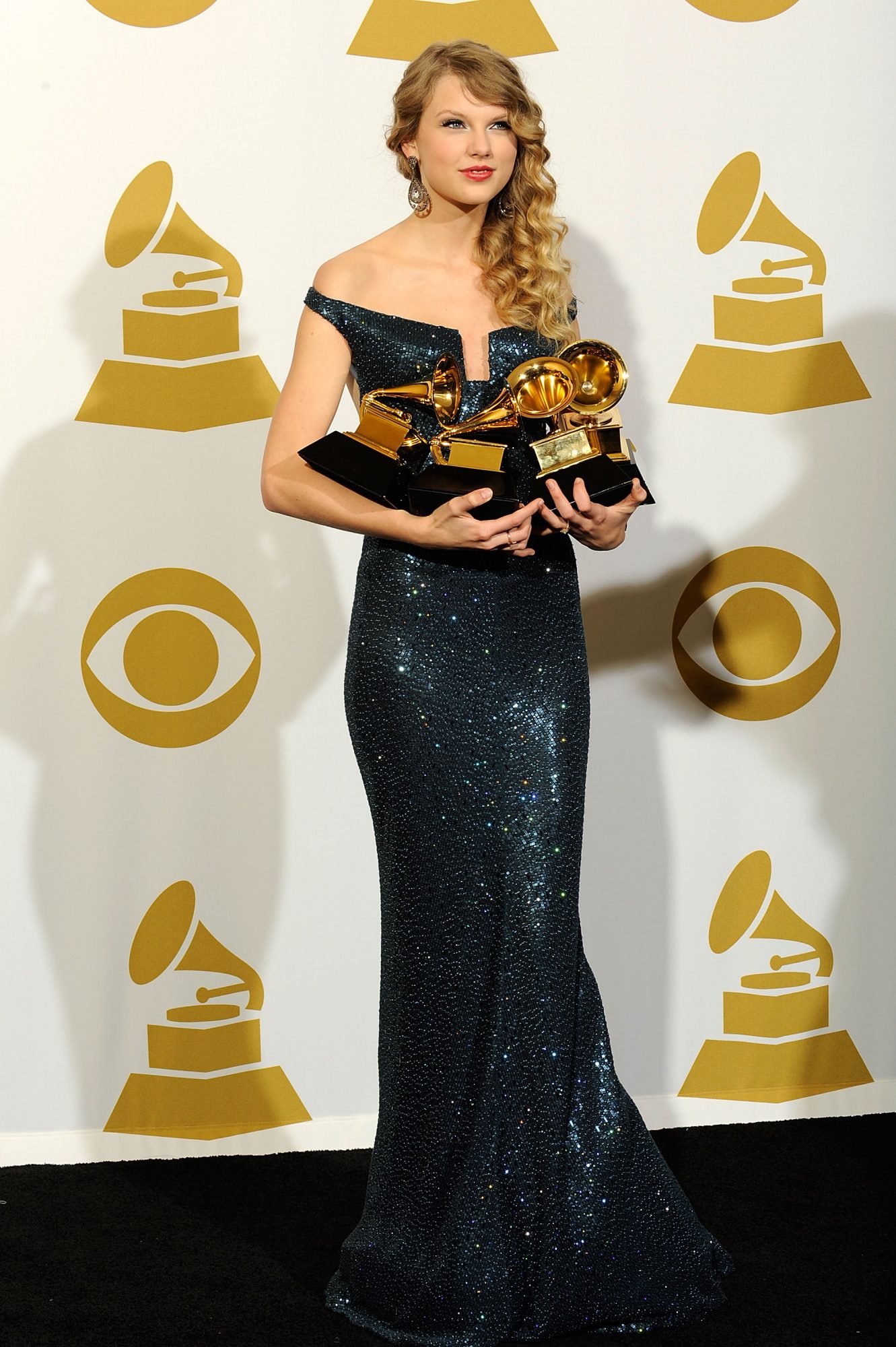 The 2010 Grammys were (clearly) a huge year for Swift. She took home the Grammy Awards for Album of the Year, Best Country Album, Best Country Song (for “White Horse”), and Best Female Country Vocal Performance. Swift’s look reflected the monumental night for her as an artist—her navy sequin mermaid gown was a showstopper—just like Tay herself. 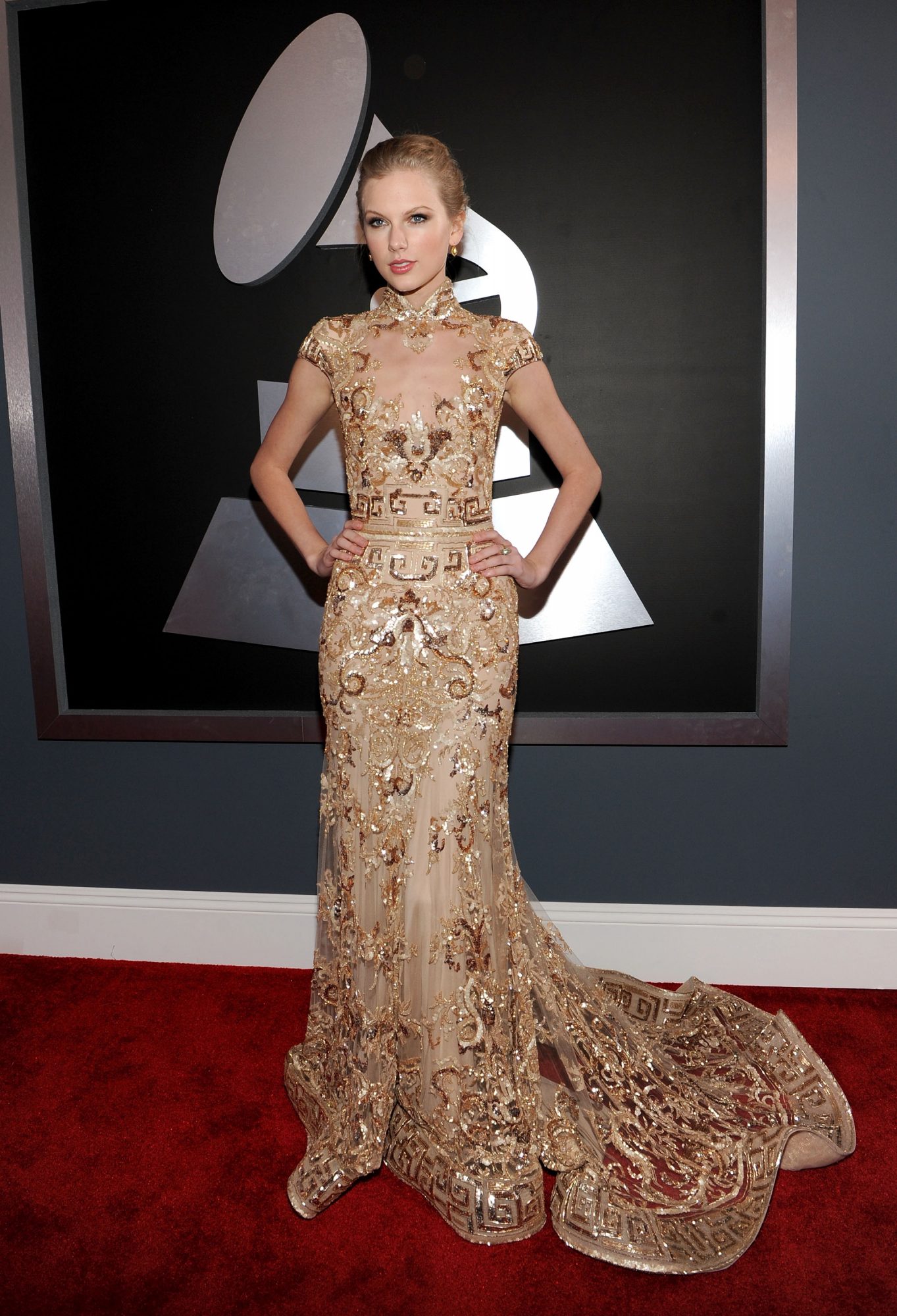 Taylor’s 2012 Grammys red carpet look is definitely one of our faves. She channeled Egyptian goddess vibes in this intricate gold Zuhair Muard gown the year she took home the Grammy Awards for Best Country Song and Best Country Solo Performance for “Mean.” 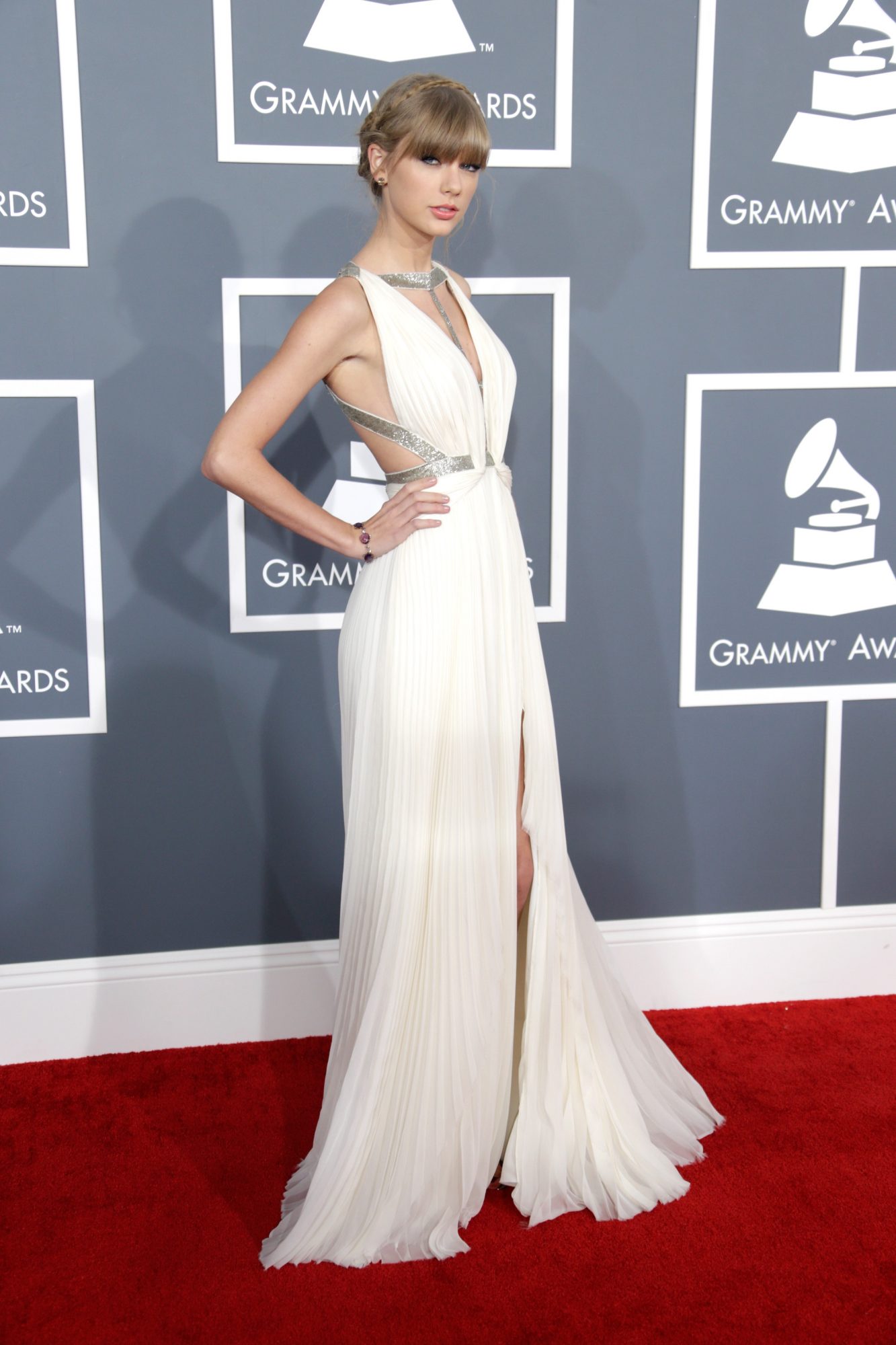 Taylor looked like a walking angel at the 2013 Grammy Awards in an airy white and silver gown and braided crown updo. She took home the award for Best Song Written for Visual Media for “Safe & Sound,” which appeared on the Hunger Games soundtrack. 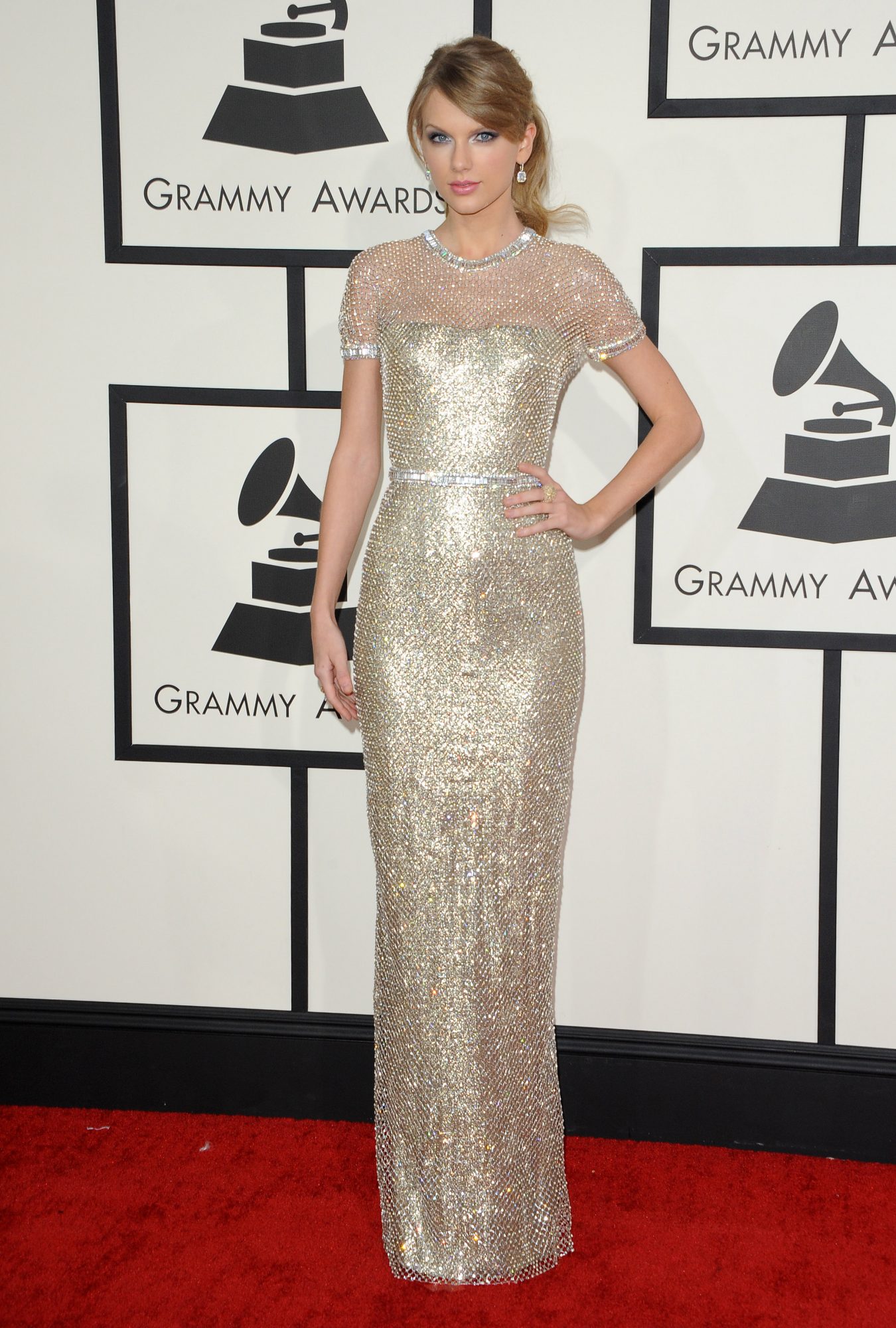 Swift really switched up her look at the 2014 Grammy Awards in a disco ball-esque gown by Gucci, piecey ponytail, and silver eyeshadow that made her blue eyes pop. 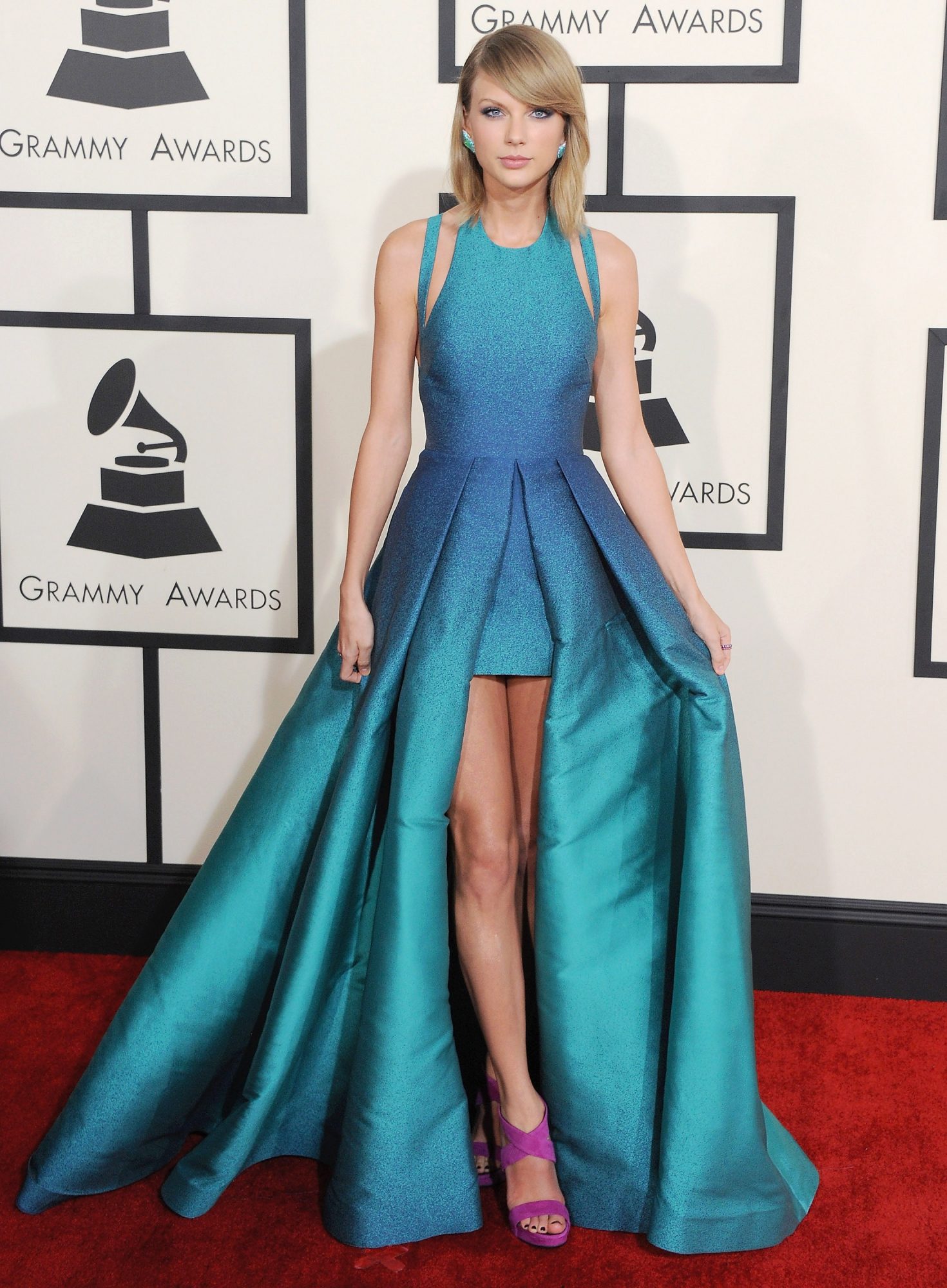 Tay’s 2015 Grammys look takes the cake for our favorite of hers. We can’t get enough of the ombré teal fabric, unique neckline, and mini under-ballgown skirt made by Elie Saab. Plus the fuchsia heels? We’re officially obsessed. 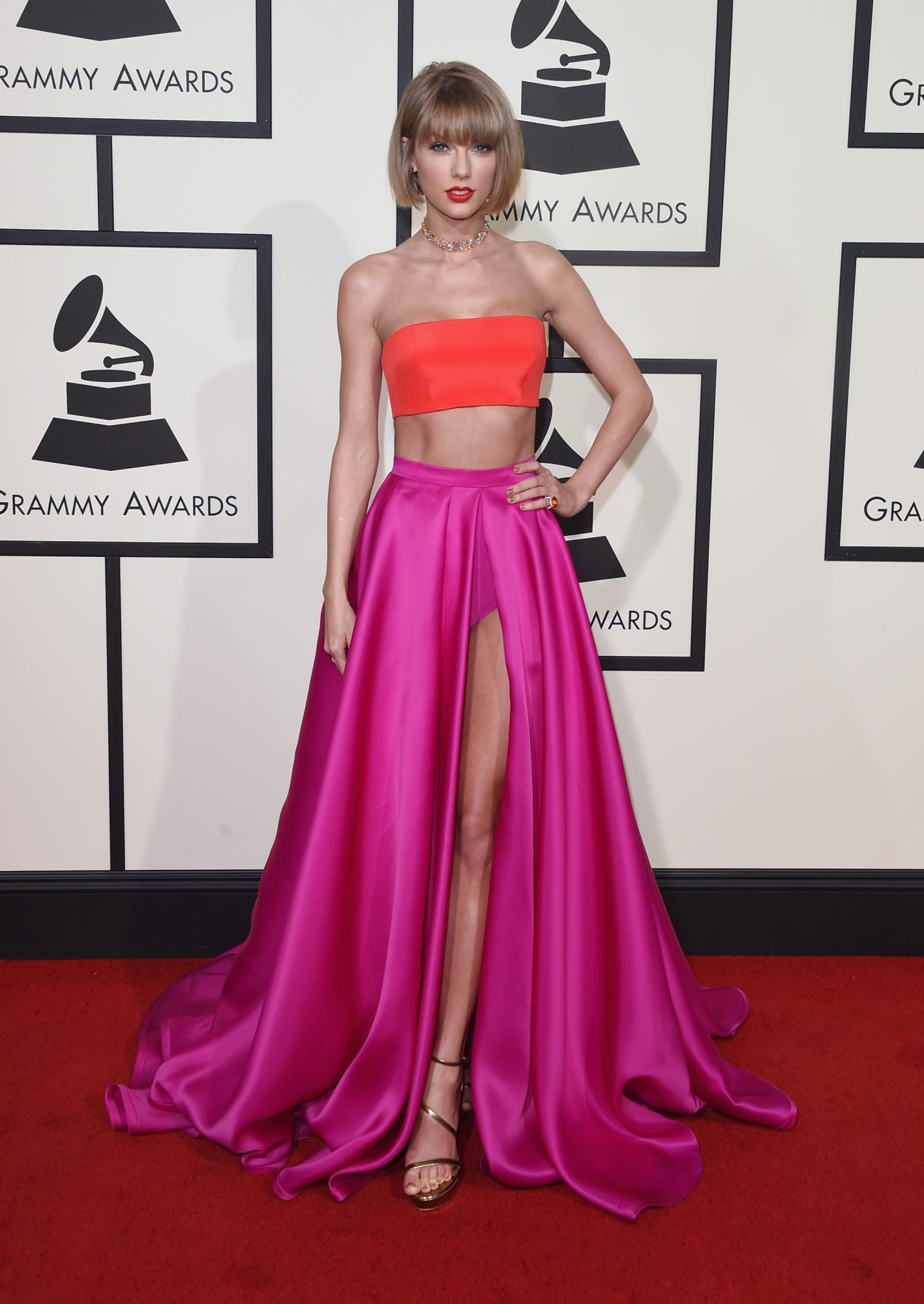 Ah, the last sighting of Taylor Swift at the Grammy Awards in 2016. This was Swift’s second biggest night at the Grammys to date, when she took home three awards—Album of the Year, Best Pop Vocal Album (for 1989), and Best Music Video for “Bad Blood.” Her Atelier Versace coral crop top and billowing hot pink skirt with nearly a hip-high slit was killer. She also rocked a much shorter hairstyle than normal, and incorporated gold accents with her strappy heels and simple jewelry, possibly channeling those golden awards? It worked.

RELATED: Take our quiz to find out: What’s Your Red Carpet Style?