How much have tampon and pad prices changed through the decades? 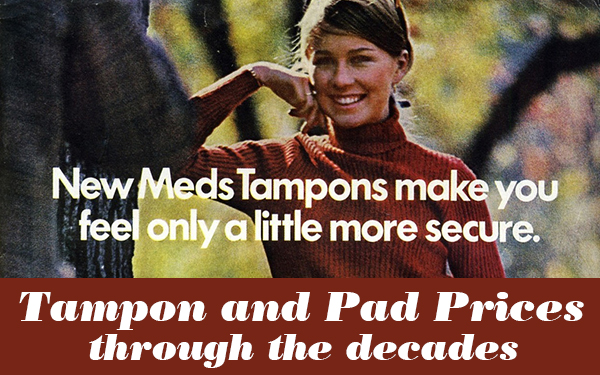 While we’re living in a relative golden age of period-wrangling products, including menstrual cups, period underwear, and birth control that causes you to skip your period entirely, most menstruating folks regularly purchase tampons and pads to cover their asses during that time of the month. And though “tampon taxes” (a bit of a misnomer, as many would-be essentials like toilet paper and shampoo are also taxed as “luxury goods”) may make it seem as though feminine hygiene products are unnecessarily expensive, how do the prices of tampons and pads presently compare to their prices throughout history?

This question is actually easier to answer than you might expect — after all, both tampons and menstrual pads are relatively recent inventions.

A brief history of tampons

According to this longer history of tampons, published recently in The Atlantic, variations of tampons have existed since the beginning of civilization. Ancient folks would use everything from wool to various plant products to stem bleeding, while people in the later half of the 1000s would also use tampons as ways to distribute medicine to the vaginal area.

According to the Museum of Menstruation & Women’s Health, perhaps the most comprehensive historical record of menstruation-related memorabilia and trivia on the Internet, one of the first tampon packages cost $0.25 for six tampons. These tampons were part of the first modern wave of menstruation tech innovation. Tampax creator Dr. Earle Haas filed for his tampon patent in 1931, and tampons have been improving in absorbency, size, comfort, and pricing since then.

Since the modern tampon’s invention in the 1930s, the cost of tampons has steadily decreased — with one huge decade exception: 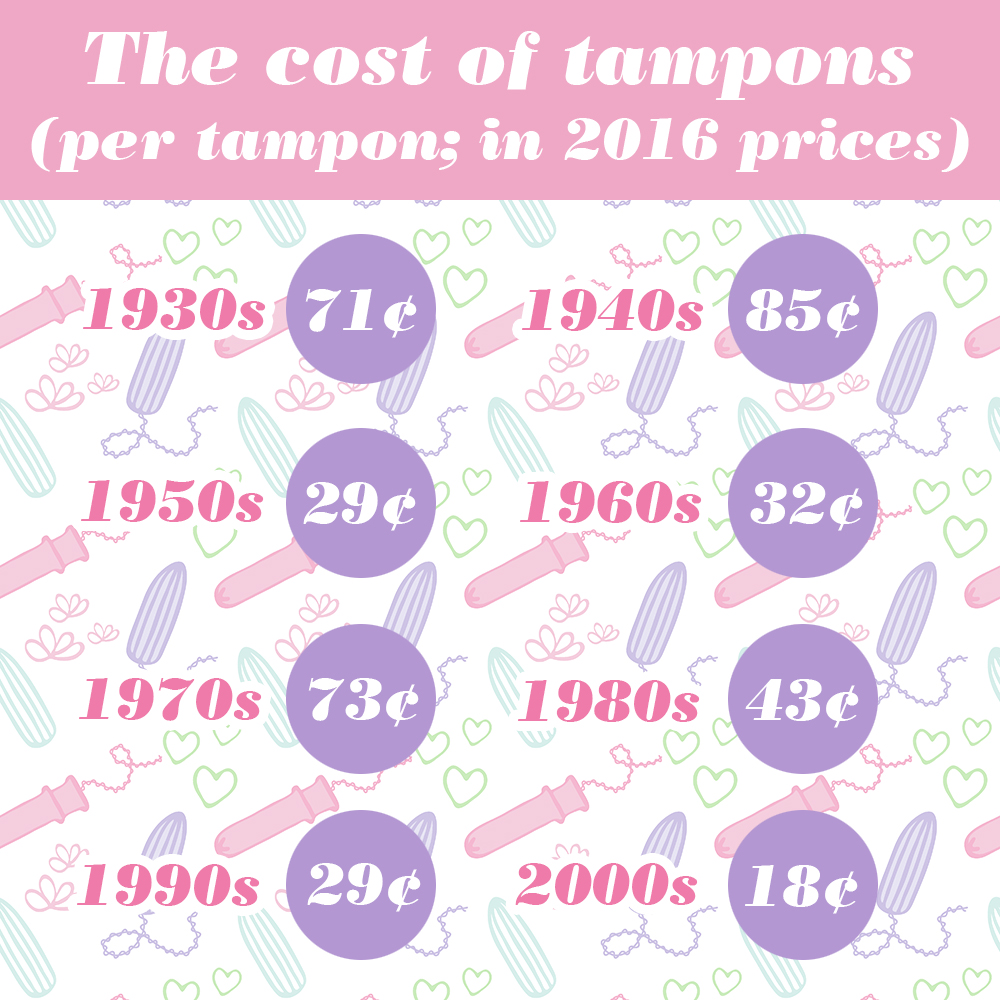 Though it makes sense that the cost of tampons has overall dropped through the decades, as what started as a technological marvel became a staple of pharmacies and purses alike. However, there’s the curious case of the 1970s, which saw a sudden spike in per-tampon pricing.

Perhaps this was due to the general economic climate of the ’70s, in which high oil prices raised the price of goods that rely on oil in their production — aka, just about all goods, including tampons. However, this coincided with several high-media cases of women dying from Toxic Shock Syndrome, which eventually led to those TSS warnings we now see on every box of tampons. (Though TSS’s connection to tampons is actually much more tenuous than we’ve all been led to believe.) In short, we’re not really sure, but at least prices fell after that.

A brief history of menstrual pads

Though versions of pads have, as with tampons, existed through the ages, menstrual pads have a more direct predecessor: The belted menstrual pad, which is exactly as terrible as it sounds. Further back, sponges, period underwear (which is making a comeback), and pads pinned (PINNED!) into underwear were all ways to stop your menstrual flow inside your undergarments until the invention of the first adhesive strip, disposable pads in the early ’70s.

Since the modern pad’s invention, prices per pad have actually steadily risen: 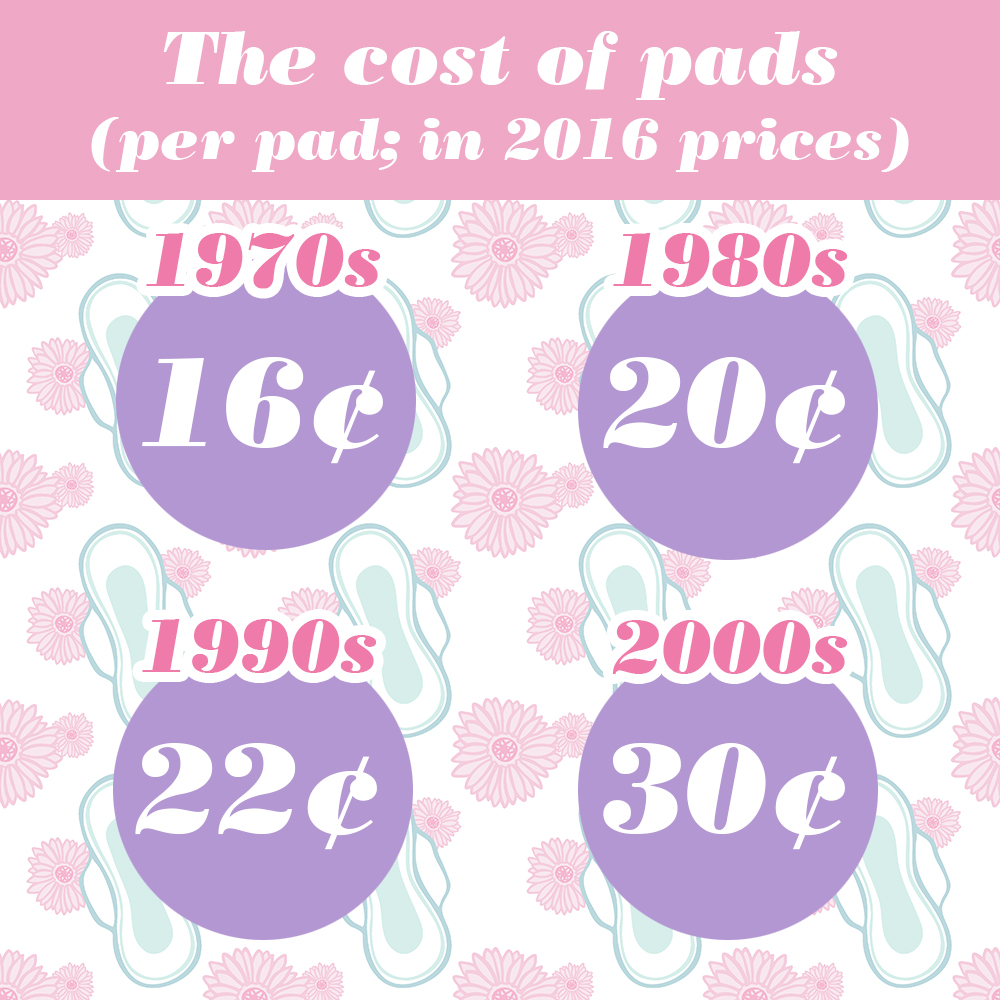 Now, there’s a huge variety of pads (thinner liners especially cost less), and the information available on historical pad prices is, shall we say, spotty. (See my note below.) But, perhaps the increase in pricing has to do with the inverse tampon effect — as people became more wary of tampons in the ’70s, they turned to pads more often, and then stayed with them. (Or maybe this is the immigrant mom effect?)

In a perfect world, menstruation wouldn’t be the tacit cultural and financial tax that it invariably becomes to those of us who bleed every month. But, it’s interesting to see how prices for our most popular “feminine hygiene” products have actually fluctuated throughout the decades; however, as billions of people around the world can attest, the ideal price for these products should be $0.00. (Or perhaps it’s time to just embrace free-bleeding/the Diva Cup/period-eliminating birth control.) Until then — we’ll just continue ponying up for our periods.

*A note on the prices: There aren’t too many historical records of tampon and pad prices through the ages, so most of these figures are gauged from one-off, historically flexible examples. Additionally, for pads, all listed prices reflect those of full pads versus liners. All current day prices were calculated here.