Well, we finally got our “Battle of the Bastards” last night, and I think we can all safely say it was one of the most epic scenes in Game of Thrones (heck, maybe even all of TV-dom) history. And while we were busy cheering on Jon Snow and crew, most of us probably missed this small, but very symbolic detail that reminds us of the close bond between House Stark and House Mormont.

Check out the house sigil on Jon’s shield.

That’s right it’s a BEAR, aka the sigil of House Mormont. 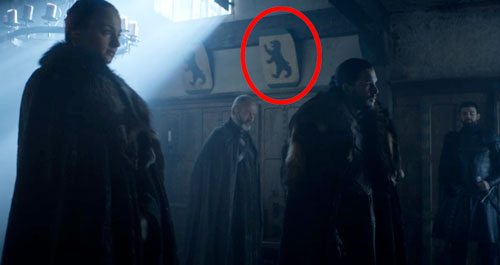 If you recall, way, way back in Season 1, Episode 9, “Baelor,” Jon received his Valyrian steel sword, Longclaw, from Jeor Mormont, aka Lyanna “10-year-old-badass” Mormont’s uncle. The sword had been in the Mormont family for five centuries, and was SUPPOSED to go to Jeor’s son Jorah Mormont (before he disgraced his family) who had the “grace to leave the sword before he fled from Westeros.”

So, INSTEAD, Jeor gave it to Jon as a “thank you” gift for saving his life from a wight, and even had the pommel (the knob) remade to have a wolf on it instead of a bear. SO much cooler than a fruit basket, right?

Jon, of course, used Longclaw throughout the insane battle…

…but swiftly ditched it for that way more protective shield.

Basically, the Mormonts have been “protecting” Jon all the way from Jeor to Lyanna, and this shield very literally symbolizes that important bond.

Also, this means at least ONE of Lyanna’s 62 men made it all the way through the battle to Winterfell. And that makes us very happy, and we’re sure Lyanna, too. Maybe, anyway.