23 times during Stranger Things when I was like, “Wow, I am so attracted to Hopper right now”

Welcome. You know why you’re here. You’re here because you, too, found yourself very attracted to Police Chief Jim Hopper during Stranger Things Season 2. Look deep into your heart, and acknowledge the truth: Jim Hopper is F-I-N-E.

Is it an unconventional choice to find Hopper ridiculously attractive? Yes. But the more I think about it, the more it makes sense. During Season 1 of Stranger Things, I was just, like, ~fine~ with Hopper. I didn’t really have strong feelings for him either way. But come Season 2 of Stranger Things? When you learn he’s been hiding — and protecting — Eleven for 10 months? And literally his only goal at the end of the day is to keep her safe and feed her Eggos? And he’s going to the doctors with Joyce and Will Byers on the regular, because he is genuinely concerned about this family, simply because he’s a good guy? And he dances like this??

Do I feel weird writing about this right now? Yes. I thought I might be the only one, so I low-key asked some others in the HG office, and this is how HG’s beauty editor, Marie, responded:

"I knew Hopper was Daddy in the first season, but for some reason his #Zaddy levels have increased in Season 2. I find him incredibly hunkalicious for several reasons: he's strong, macho yet sensitive, protective, smart, kind, and goofy = the perfect recipe for a dreamy man. [tongue out emoji x 3]

Meanwhile, Video Producer Christina had her own input:

"Hopper is the kind of guy to beat up his daughter’s bad boy boyfriend because he once WAS a bad boy boyfriend. He’d, like, take you to shitty dive bars on dates but wear cologne so you know he cares. He would probably build you a house with his bare hands if he wasn’t so busy saving the world all the time."

This is serious. Need me to dive in further? Yes you do. These are just some of the, like, 500+ times during Stranger Things Season 2 where I was like, “Is it getting hot in here, or is it Hopper?”

1. When he walked in eating a donut, be still my heart: 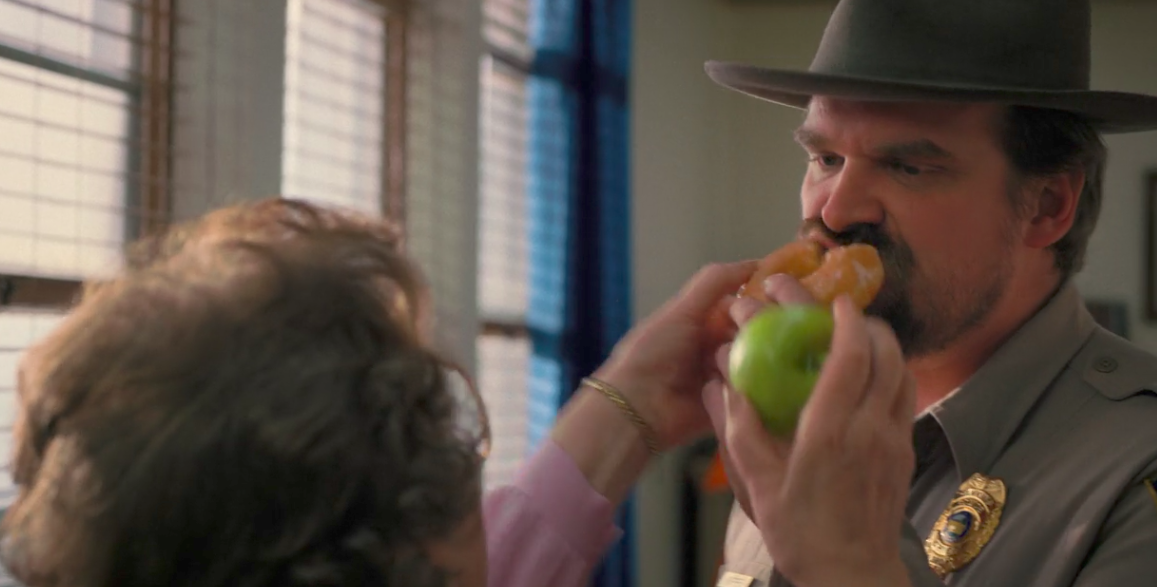 2. When he sat down at his desk and put his feet up in a total power move: 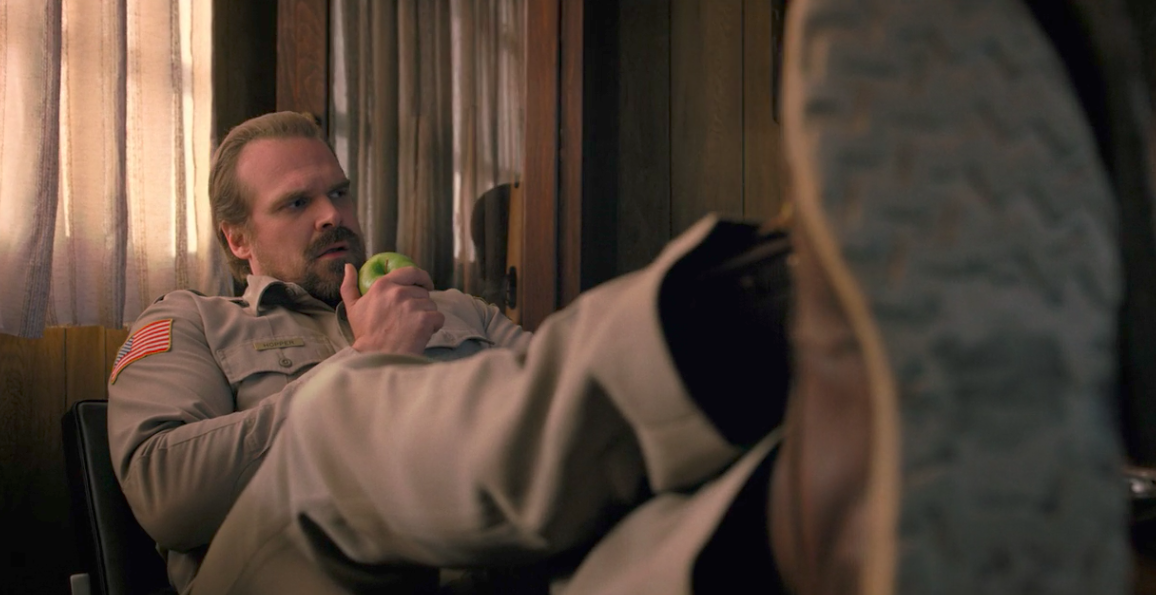 3. When he walked through the rotting pumpkin field wearing his hat and aviator glasses: 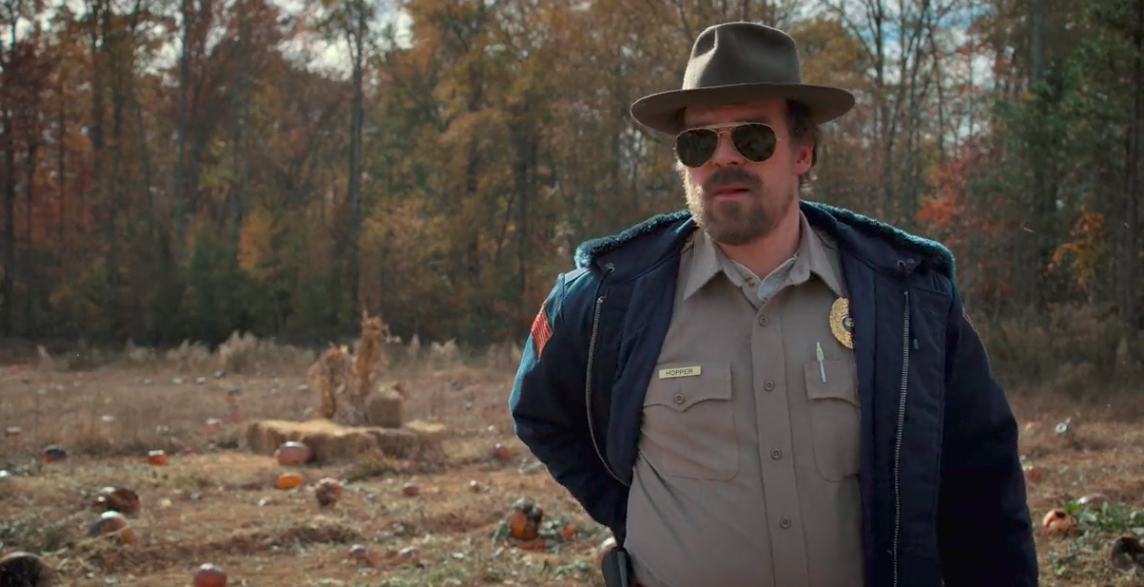 4. When he, for no reason other than the fact that he CARES, drove all the way out to the Hawkins lab just to be with Will and Joyce: 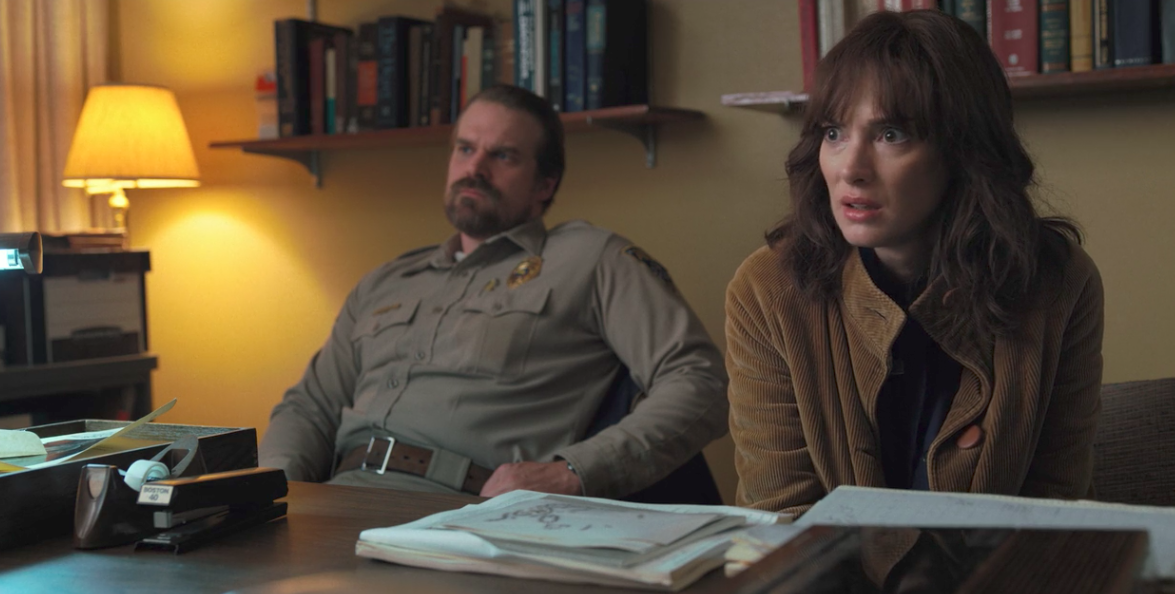 5. When we learned he had been hiding Eleven THIS WHOLE TIME and gently scolded her for eating Eggos before dinner: 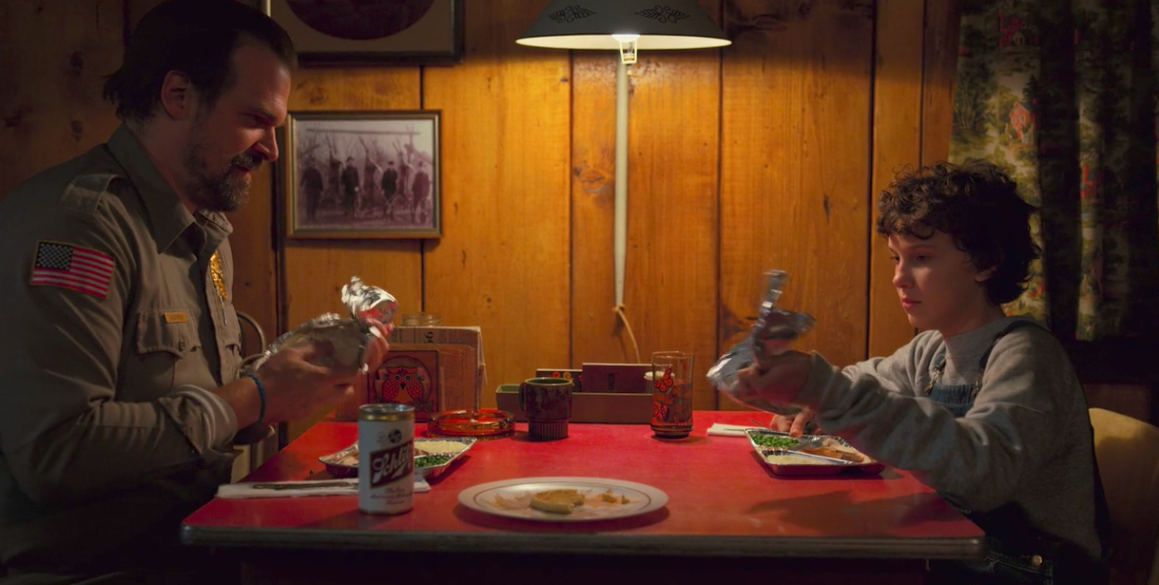 6. When he had to tell Eleven that she couldn’t go trick-or-treating, and it was really sad, but he did it so gently and also Eleven was dressed up as a ghost so Hopper was just talking to Eleven underneath a white sheet: 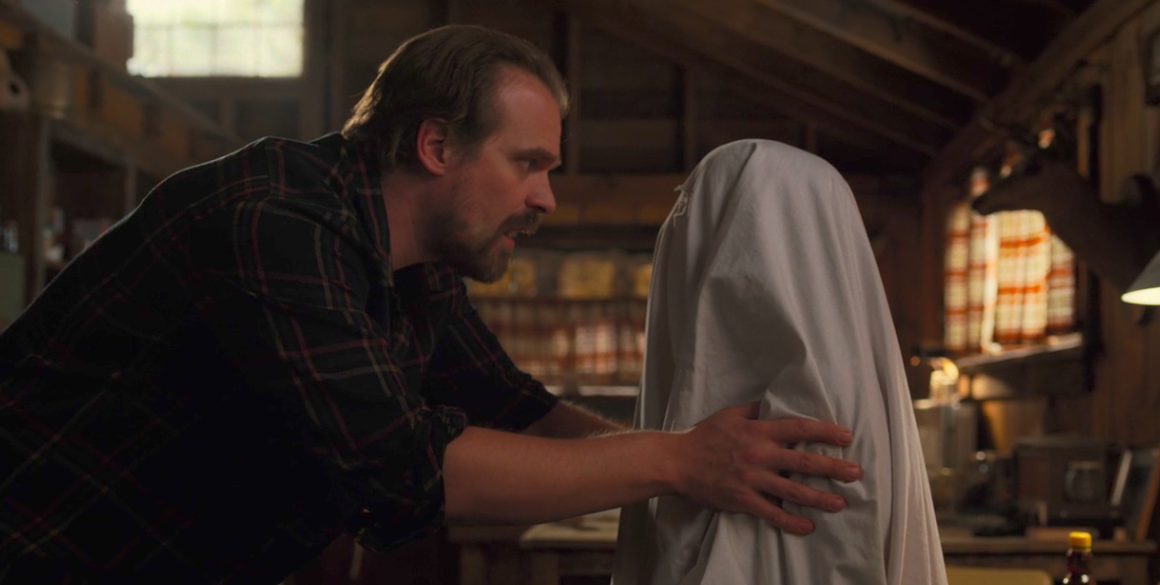 7. When Hopper gave Joyce one of his smokes, and she started coughing, and he just gave her this smile: 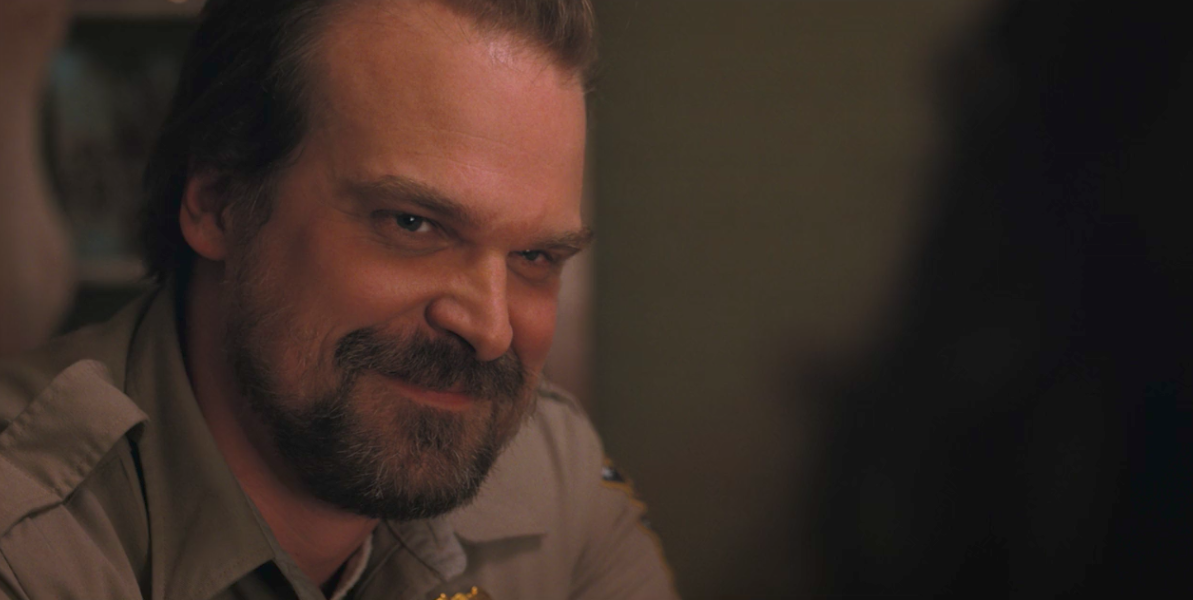 8. When we got the flashback to end all flashbacks and learned how Eleven and Hopper came to live in the cabin in the woods, and he called it “home,” and hold on, I’m crying: 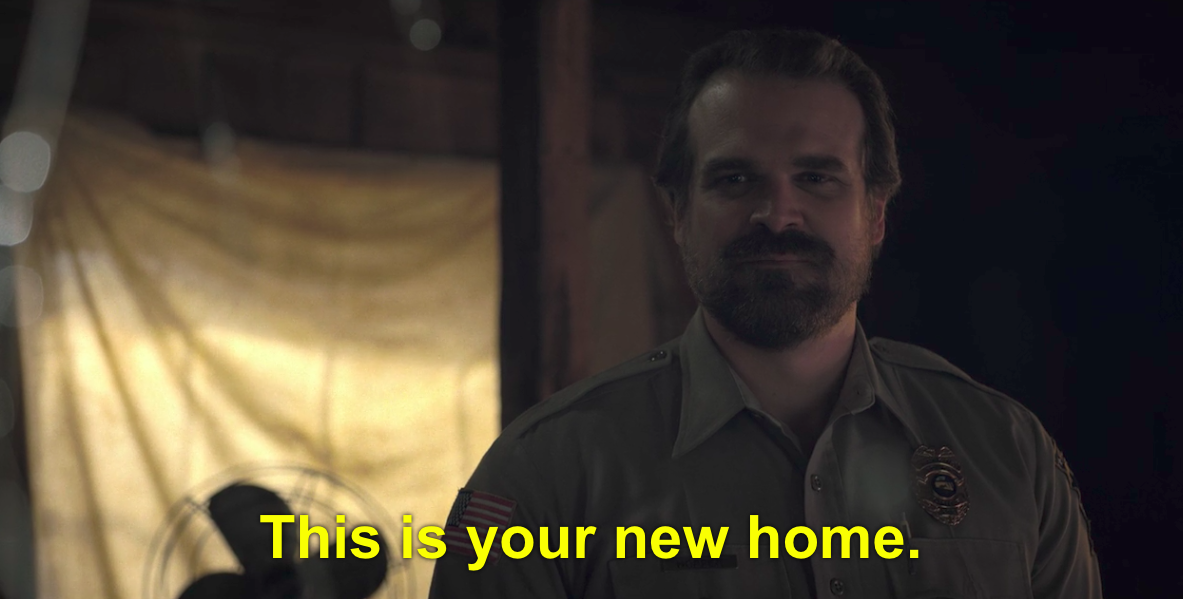 9. WHEN HOPPER DID THIS ‘LIL DANCE: 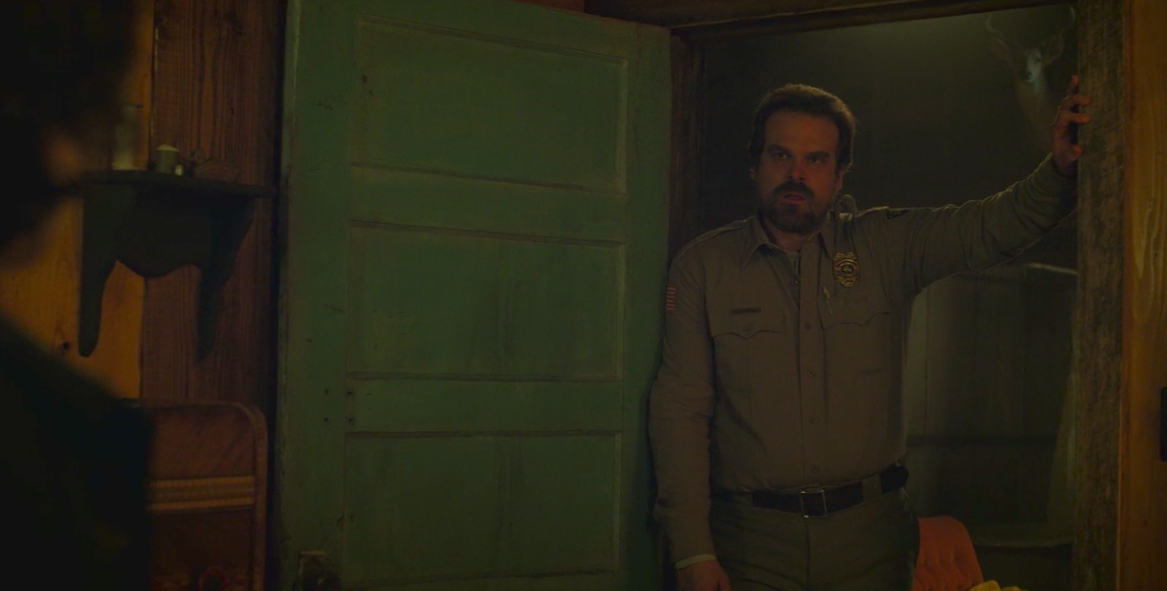 11. When he went over to Joyce’s because Will was kinda freaking out, and Hopper listened to Will, and like REALLY LISTENED:

12. When he just started digging in the pumpkin field, on a hunch, and was all sweaty and gross and kinda looked like Indiana Jones (that’s what The Duffer brothers were going for): 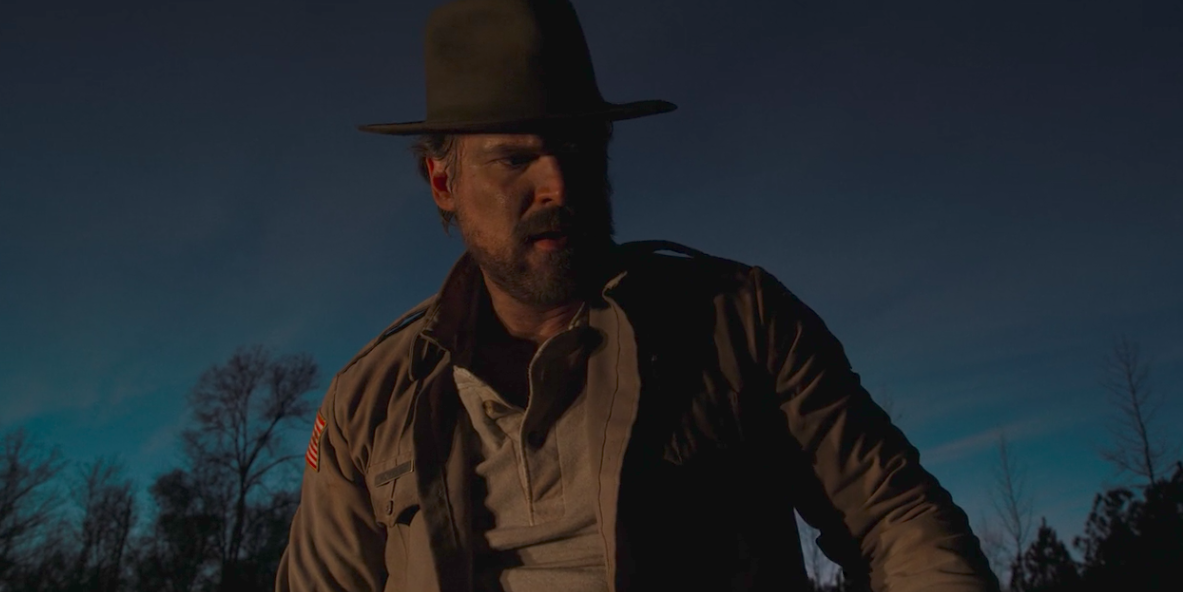 13. When Hopper was wearing this V-neck scrub combo:

14. When he was about to go all macho Rambo and had to teach Bob (the Superhero) how to use a gun: 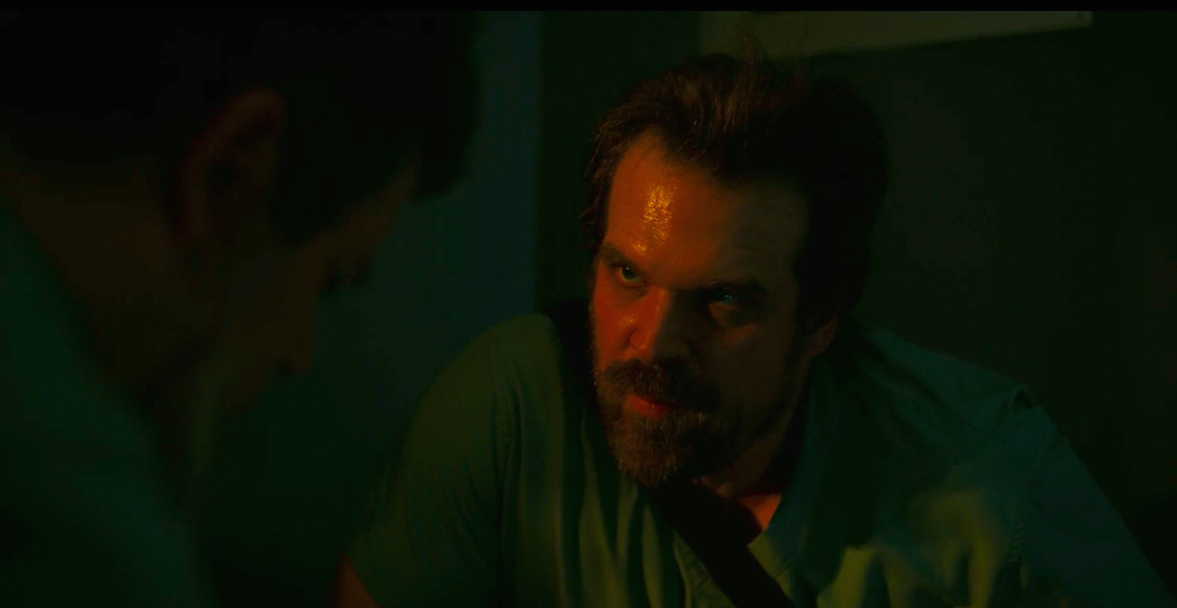 15. When he went to go comfort Joyce in her room, and just sat on the floor:

16. When he let the kids help him out cracking the morse code: 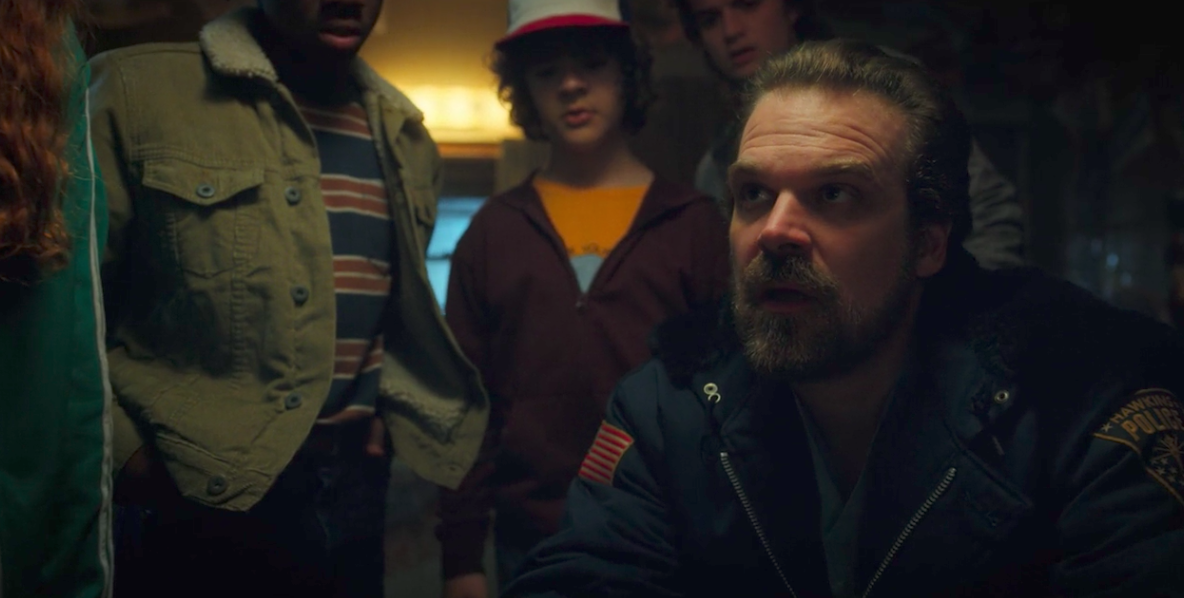 17. When Eleven showed back up, and she was pissed, and Hopper was pissed, but he brought her in for a hug anyway:

18. And then Mike was pissed, and Hopper let Mike cry in his arms: 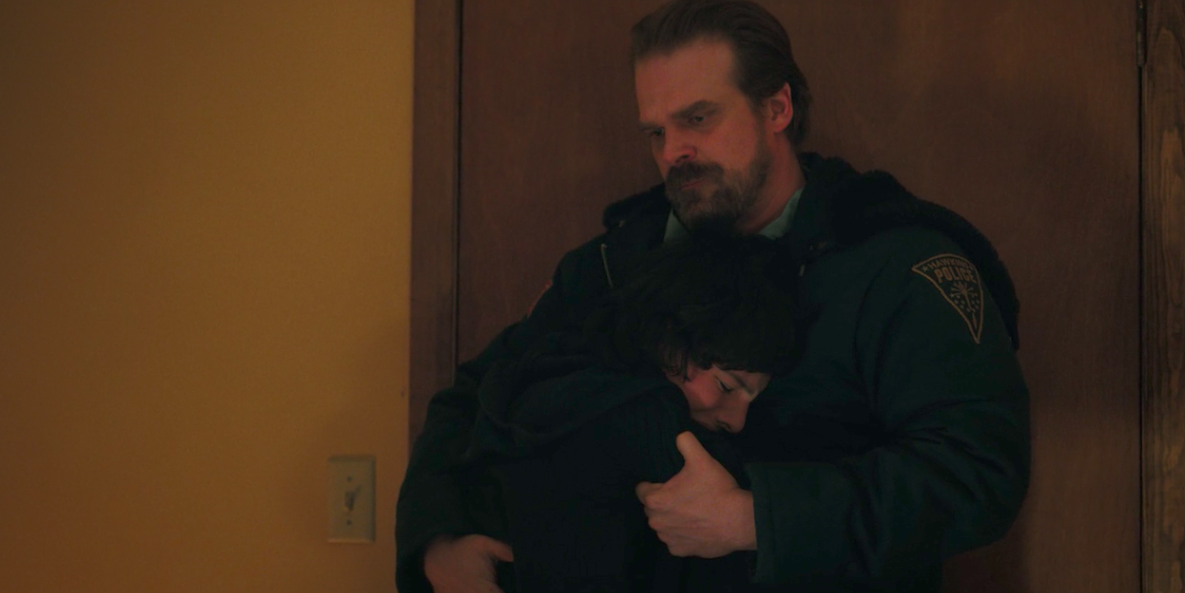 19. When he and Eleven talk about where she’s been, and he has this total dad look of confusion on his face: 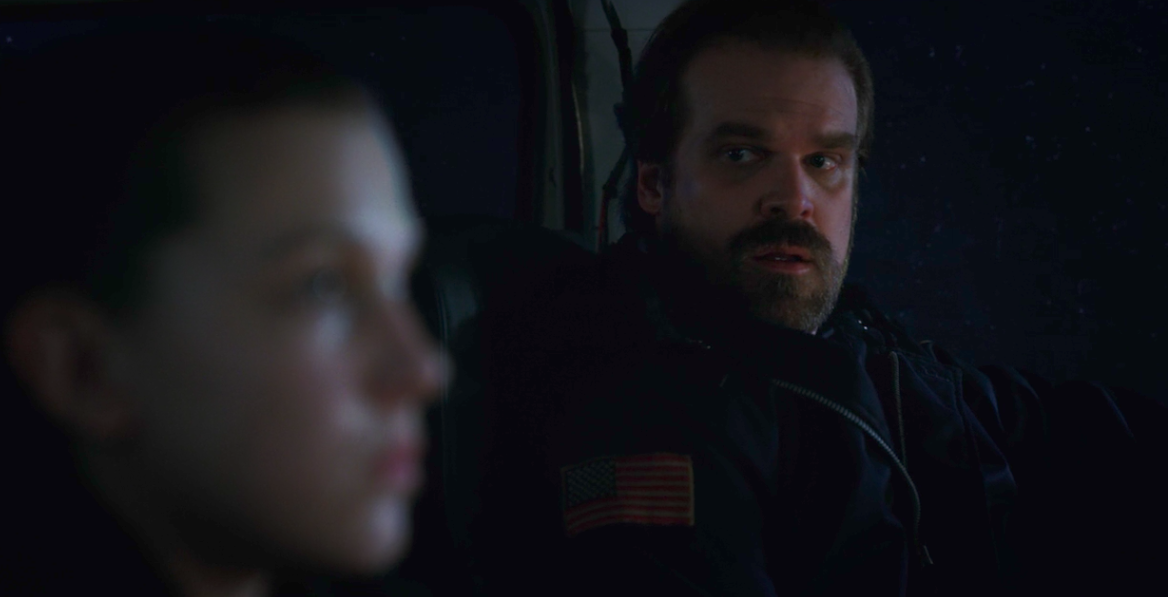 20. When Eleven closes the gate and Hopper hugs her tight and says, “You did good, kid,” and hold on, crying again: 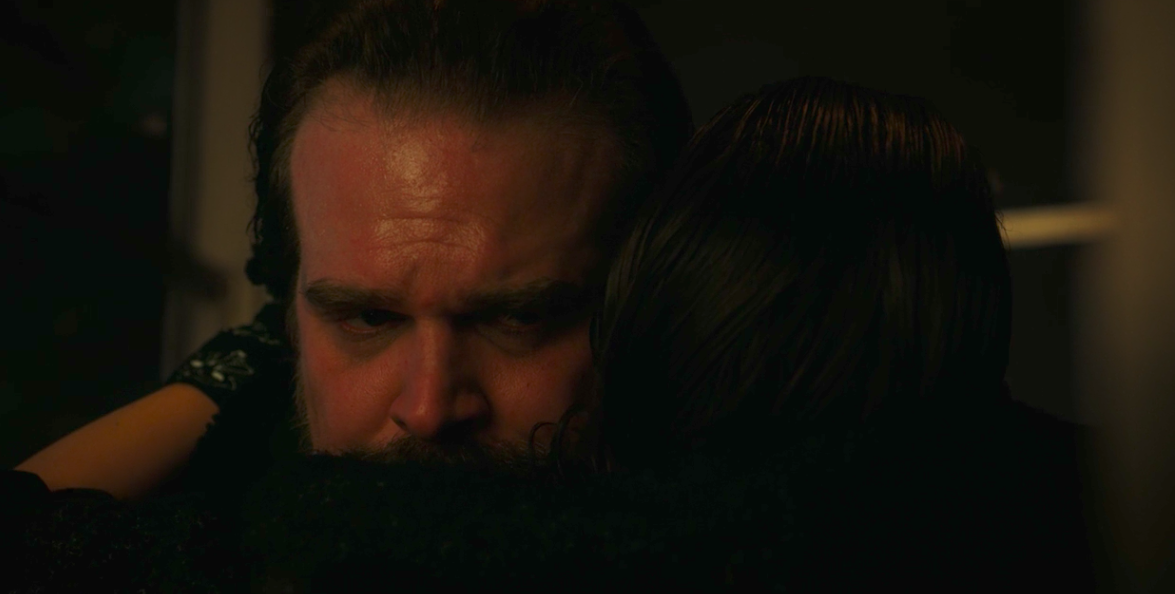 21. When he wore this maroon V-neck sweater and smirked like this:

22. When he looked at Joyce like this because he knew she was hurting:

23. AND WHEN HE HELD JOYCE LIKE THIS, BECAUSE SHE WAS SO SAD:

Thanks for stopping by! I’m going to need a few minutes now to collect myself.