I’ve seen what happiness looks like, and it’s Shia LaBeouf laughing at Sir Patrick Stewart. This was all in good fun, don’t worry. Stewart just happened to make LaBeouf laugh very hard, and seeing that happen IRL with your own two eyes is nothing short of magical.

I wish I could show you what LaBeouf laughing at Stewart looks like, but I can’t. It was a one-time-only thing that happened at the most recent Film Independent Live Read, held at the Los Angeles County Museum of Art, or LACMA for short. The Live Read series has been going on for five years now, after being started back by director Jason Reitman back in 2011. Sure, reboots and remakes are all the rage right now, but Reitman’s recreated live reads of classic movies with surprising new casts is where it’s at.

Over the years, he’s tackled films like The Empire Strikes Back, The Princess Bride, and Ghostbusters. For the first film of 2016, Reitman actually passed the directing duties over to Mark Romanek, who has directed over 30 music videos for artists ranging from David Bowie to Taylor Swift. Romanek’s script of choice was one of his favorites, Dr. Strangelove, Or How I Learned To Stop Worrying and Love The Bomb (and I can’t help but mention that Romanek is a graduate of Ithaca College, as am I, and the IC mascot is a “Bomber” and no, I don’t really get the mascot and probably never will, but it’s super fitting that a former Bomber directs Dr. Strangelove, no?).

So what’s this whole thing about LaBeouf laughing at Stewart? Well, LaBeouf played Brigadier General Jack D. Ripper (who sets off the whole events of the movie, and then barricades himself in his office to fight off the incoming troops), and Stewart played the titular Dr. Strangelove. Though the two characters don’t have an scenes together, both actors were one seat away from the other. And when Stewart launched into a thick German accent for nuclear war expert Strangelove, no one could keep it together. There’s a reason Dr. Strangelove is #3 on AFI’s 100 Funniest Movies. 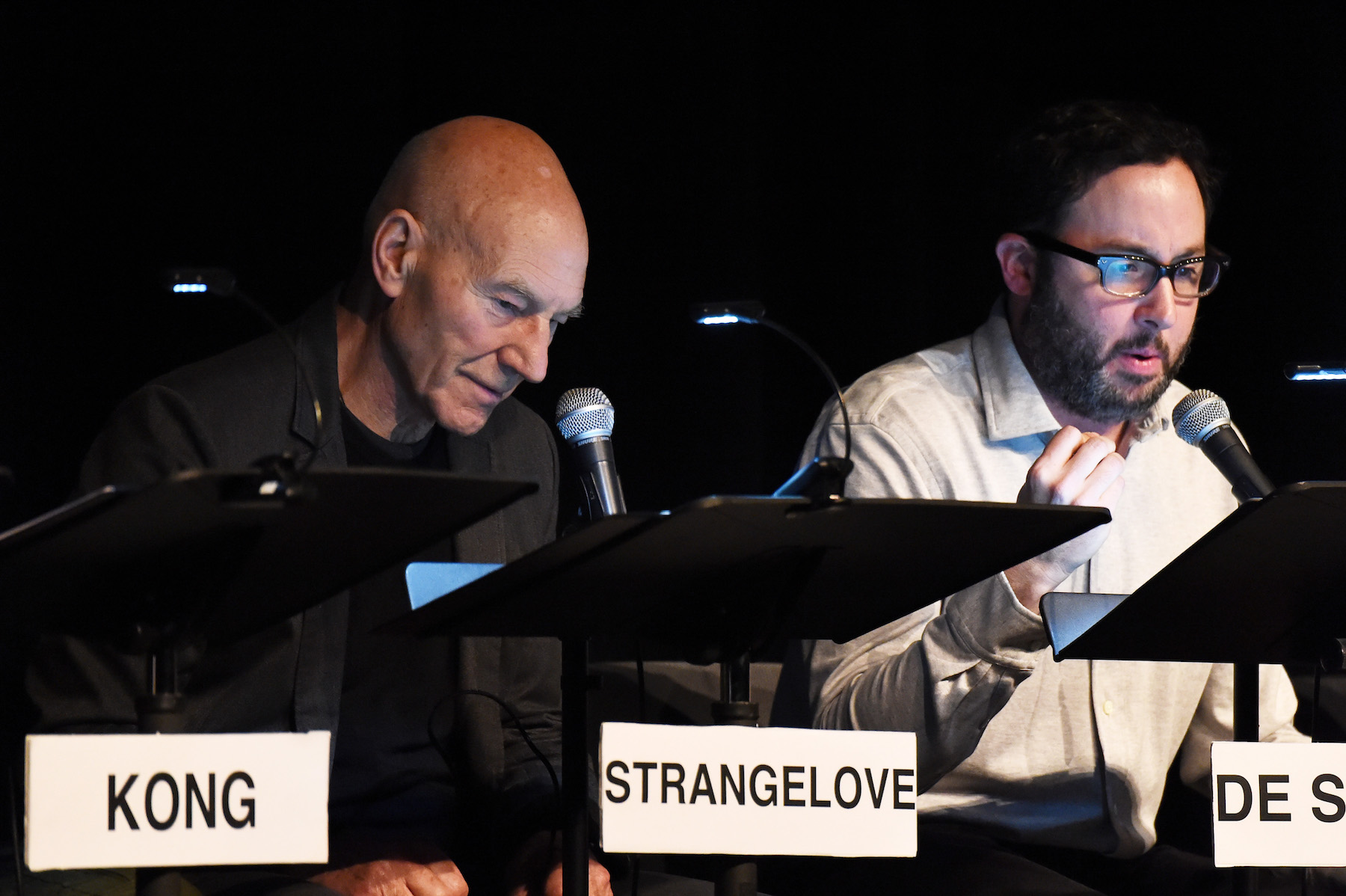 But that’s not the only time the audience — and the actors on stage — doubled over with laughter. The real MVP of the show might have been Johnny Knoxville, who played pilot T. J. “King” Kong and showed up to the reading in a jumpsuit. He also wore a gladiator helmet for most of the show, just because. And then he threw a pie in surprise guest Fiona Apple’s face while she sang, “We’ll Meet Again,” just because.

Then there’s also Seth Rogen who took on the role of constantly flustered General Buck Turgidson and Josh Gad doing a completely over the top Captain Lionel Mandrake. A honorable mention also has to go LaBeouf, who along with playing Ripper also played just a regular pilot, and made static microphone noises every time he spoke.

I’d say this is not a show to be missed, but if you’re reading this now, you’ve missed it. These Live Reads are a one-shot thing, and then they’re gone. But thankfully, they happen every month out of the year and are growing in popularity each time. Hold out hope that Reitman picks your favorite movie to do next — and that you score a highly coveted ticket.