Why we need to stop telling women to smile

It was a frigid gray Tuesday in February, and I was on the verge of collapse. My life was in upheaval, but that day, I managed to throw on a coat and get myself to the grocery store to buy comfort food in an attempt to pull myself together. I was managing it, too, until I heard a gruff voice behind me in the snacks aisle.

I turned around to find a silver-haired man, probably in his 60s, staring at me through his thick, wire-rimmed glasses with his beady, watery eyes. “You should really smile,” he said, winking, as if selflessly gifting me sage life advice he’s learned over the years. “You’re prettier that way.”

Or, in presidential candidate Hillary Clinton’s case, Smile, you just had a big night. 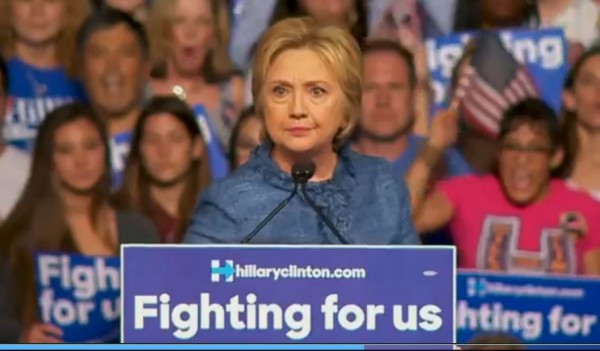 Undeniably, the former Secretary of State did have a big night. On Tuesday, the Democratic presidential front-runner clinched four states, increasing the lead over opponent Bernie Sanders to 314 pledged delegates. However, during her speech at her primary-night rally in Palm Beach, Florida, some reporters and pundits focused on something else entirely.

All candidates face criticism for their stances and political histories, but facial expressions have nothing to do with politics. It would do no good to highlight that, even after Republican front-runner Donald Trump won four states, he smiled even less and used his same characteristic argumentative and haughty tone in his speech last night; nor would it help to point out that Bernie Sanders’ normal voice seems to be at a near-constant shout-level. The fact that Hillary Clinton is the only candidate who’s expected to regulate her emotions, to smile broadly and gratuitously even in the midst of an exhaustive and grueling primary, to constantly balance on the fine line between coldly logical and overly emotional — this is an example of societal sexism that women all over the world face.

Of course, as Vogue notes, this is far from the first time Hillary has had to deal with the policing of her demeanor and tone — that her voice is “too loud,” “grating,” and “shrill,” while Bernie Sanders’ shouting is considered endearing and reminds the public of their “grumpy grandpa.” But even when Hillary does smile, it’s dissected and determined unworthy; body language expert Tonya Reiman claimed that Hillary “smiles just to mask whatever emotion she does not want you to see. . . This is known as a social smile.”

That’s right: Even the quality of our smiles are up for judgment. We must not only smile on cue, but mean it — shove whatever emotions we have deep, deep down so we can display our pearly whites for the man requesting them.

Last night, when Hillary Clinton was told to smile after her victories, I wonder if she felt the same lurch deep in her gut that I did when I was standing in that grocery store. I hate to admit it, but when that man told me to smile, I did it. I smiled.