Right now, the most beautiful Star Wars sight ever* is, without question, that moment in A New Hope when Luke wanders outside to stare at the setting Tatooine double suns. Gorgeous, right? Well, that’s going to look like a crayon drawing compared to what Star Wars Land will look like in 2019.

Disney has once again treated us to some brand new images of the upcoming Disneyland and Disney World expansion, and they are something else.

You’re going to feel like Luke looking at the double suns stepping into this new world. Or, at least your Instagram pictures will probably look like that.

While Lucasfilm and the Disney Imagineers were ridiculously coy with their teases, they brought a long a handful of images to Star Wars Celebration. We’ve seen plenty of aerial and wide shots of the new land, but we haven’t really seen many images of what the actual space will look like.

Well, not anymore. One day soon, you’re going to be able to wander through this market. This is coming to life. 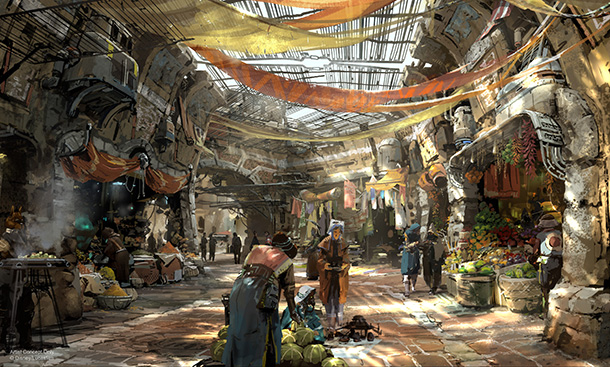 Speaking to the crowd, Scott Trowbridge, a creative executive at Walt Disney Imagineering, explained the idea behind this new area. The long and the short of it is that it’s a brand new location in the Star Wars galaxy, and that is all kinds of exciting.

"It would be easy to think, 'let's revisit some of our favorite places,'" Scott told the crowd. "[But] if we were go to to those places, we know the stories that happen there. We know whose stories they are [and] we know that we're no in them. We wanted to build new Star Wars stories, new destinations, but this time you can be in this story. We want you to discover your own Star Wars story, not just relive someone else's stories."

The panel also teased a few other images of the area, and made sure to note the drinking fountains. Because Star Wars Land won’t just have regular water fountains.

Before closing out the panel, those on the stage were keen to remind us that the next dose of Star Wars Land intel will come at this summer’s D23 Expo. Hopefully we can wait that long. Then again, we are waiting till 2019 for Star Wars Land to actually open.

*Maybe the most beautiful Star Wars sight for you is BB-8, or maybe Poe letting Finn keep his jacket, or the end of Empire Strikes Back…