So THIS is why you keep getting canker sores

If you’ve ever had a canker sore, you know how painful these mouth sores can be. But what drives us really crazy is that if you’re a person who gets one canker sore, you probably get a LOT of them. And we want to know why.

According to the National Institute of Dental and Craniofacial Research (NIDCR), recurring canker sores affect about 20% of the population. Canker sores are officially called aphthous stomatitis, and they’re small, painful ulcers that develop in your mouth. They last about two weeks, and they can be very inconvenient. And while scientists don’t know the exact cause of them and there is no cure, they do know a few things that explain why you’re getting canker sores all the time.

1Because canker sores are in your genes.

That’s right, according to Science Daily, if you’re susceptible to repeated canker sores, it’s probably genetic. Studies suggest that a family history of canker sores may make you more prone to getting them yourself. So you can thank mom and dad for predisposing you to these annoying mouth sores. The bad news is, you can’t fix your genetics. But the good news is, at least you have a clearer idea of why these sores keep happening.

2Because you’re a woman.

Yep, women appear to be more likely to get canker sores. According to the NIDCR, women’s hormones contribute to our likelihood of getting canker sores. And many women get them only during a certain time of our cycle. Yet another thing that our hormones weirdly affect, but again, it’s nice to understand why we get them.

Now, there are some causes that you can control, although again, science doesn’t totally understand how. But there has been evidence that what you eat can make you more prone to a canker sore. According to the NIDCR, one study suggested that deficiencies in certain foods like vitamin B12, folic acid, and iron can cause these sores. However, another similar study did not have the same findings.

The University of Maryland Medical Center (UMM) also notes that an allergy to a particular food could cause sores to flare up. Because scientists haven’t totally pinned down what foods may or may not cause canker sores, avoiding them can be tough. But if you notice a new sore, maybe write down what food you recently ate. If there’s a common food that seems to cause it, that could be a contributing factor. However, all these studies admit that because there hasn’t been firm evidence, what you’re eating is only one of many factors.

4Because you’re stressed out.

Both the NIDCR and Science Daily agree that stress can cause an outbreak of canker sores. Because that’s what we need on top of a stressful day — painful mouth sores. But that’s why managing our stress and trying to calm ourselves down is crucial. So make sure to take care of yourself, particularly after a tough day, to help avoid these mouth sores.

And if you do have a canker sore, here are some simple ways to lessen the struggle. 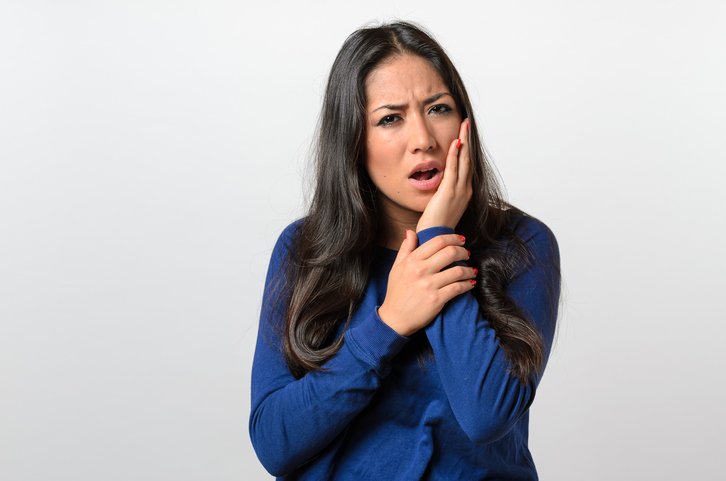 One of the pieces of good news is that unlike cold sores, canker sores aren’t contagious. So that’s a relief. But there’s no cure for them, so for treatment, you can only manage the annoyance. The NIDCR recommends avoiding abrasive foods like potato chips that can scrape or exacerbate the sore. Also, avoid overly spicy or acidic foods. UMM also recommends gargling salt water or mouthwash (the non-alcoholic kind). And they last no more than two weeks, so at least it’s only temporary.

And even if it doesn’t make the pain any less annoying, it’s at least good to know that if you’re a frequent canker sore sufferer, you’re not suffering alone.