Here's what to do to avoid tossing and turning every night until November 3rd.

On Tuesday night, I did the same two things as many of you: I watched the first presidential debate, and then I went to bed—where I proceeded to stay awake for several hours, totally unable to sleep. Despite feeling physically exhausted, my mind wouldn’t shut off; I kept thinking about Chris Wallace’s poor moderating, and Joe Biden’s struggle to talk over Donald Trump’s interruptions, and Trump’s horrifying tip to the Proud Boys to “stand back and stand by.” Even when my thoughts were elsewhere, the nerves and dread caused by the debate made their way in. When I finally fell asleep, at some point around 5 a.m., it was to a blur of anxiety-colored dreams.

And I wasn’t the only one. “After the debate, I couldn’t fall asleep,” says Jenna Brillhart, 27. “My brain was racing with things that I wanted to yell about. I found myself sitting awake dissecting every response Biden had—when he could get one out.”

Taryn Spiegel, also 27, had a similar experience. “It was extremely hard to fall asleep after watching the debate,” she says. “I kept replaying the chaos I had just watched unravel on national television. It took about two melatonin [pills] to get me to sleep after trying for about an hour.”

Sleeping badly due to stress is not a new experience, of course, for me or anyone else. We’ve all had nights where a looming work deadline or worrisome relationship issue has kept us awake long past our planned bedtimes; the potential risks or scary what-ifs of the situation forcing our minds into overdrive. But unless you have an anxiety or sleep disorder, these unpleasant evenings are typically few and far between. We get a pitiful few hours of rest, and then we spend the next day bleary-eyed and dealing with whatever crisis had kept us awake, lessening our nerves enough so we can fall asleep without issue later on.

But this year, things are different. In addition to our normal, everyday stresses, we’re also dealing with the effects of a worldwide pandemic that’s taken away jobs and incomes and millions of lives and that promises to only get worse. Then there’s the crisis around race and police brutality, and the ongoing economic recession, and the loneliness that comes with being constantly at home. And then there’s the election.

At the time of writing this, there are a little under five weeks left until November 3rd. Current polls show Biden leading by up to nine points in key states, but considering what happened in 2016 and Trump’s seemingly unwavering base of support, it’s hard to feel any sense of optimism. Instead, as the days go by, our fear grows: that Trump will get re-elected, that Roe v. Wade will get overturned, that more people will continue to unnecessarily die under the watch of a president who said COVID-19 “affects virtually nobody” (despite receiving his own diagnosis just two weeks later).

And regardless of whether you spend your days glued to Twitter or doing your best to avoid the news, the realities of our world right now makes that fear impossible to escape—especially when we’re trying to sleep.

“I don’t think I’ve had a proper night’s sleep since the beginning of the pandemic, but it’s definitely gotten worse over the past few weeks with the election on the horizon,” says Aly Semigran, 36. “The thought of four more years of this waking nightmare absolutely keeps me up at night, because how could it not?”

According to experts, there’s a clear scientific connection between the anxiety-inducing nature of the election and the quality of our sleep. “We need to be able to settle our minds down in order to get good, deep sleep at nighttime. We have to feel safe, we have to feel secure,” says Dr. Eric Nofzinger, a sleep researcher and founder/chief medical officer of Ebb Therapeutics. “Stress of any kind, and certainly election stress, is going to contribute to a phenomenon called hyperarousal in the central nervous system, one of the key ingredients behind insomnia.”

As Dr. Nofzinger explains, hyperarousal is when the brain suddenly goes into “overdrive,” leading to racing thoughts of the kind that can keep us awake at night. It’s often experienced by those with post-traumatic stress disorder (PTSD), as even just thinking of past trauma can cause an overreaction of the body’s stress response, which in turn triggers a rush of epinephrine (aka adrenaline) that stimulates the brain’s fear center. Dr. Nofzinger notes that for some people, fears over the election and the events of the Trump presidency thus far have manifested in a way similar to PTSD, as “they’ve been exposed to something that’s out of their control but that is traumatic.” And that trauma, unfortunately, can lead to sleep interruptions that last for days on end.

The never-ending news cycle, which is amplified via social media, certainly doesn’t help matters. “Everything you see online, whether it’s scrolling through Instagram or reading the news, suddenly consumes your every thought,” says Brillhart. Paula Tsvayg, 27, adds that the stress of the news, which she calls “all-consuming,” frequently interferes with her rest as well.

I wake up in the middle of the night and struggle to get back to sleep, she explains. It often gets triggered by having a day where a distressing news story broke—it’s hard to stop thinking about it.

Just because tossing and turning has become the norm for many of us doesn’t mean it has to stay that way, though. While there may be no avoiding the news itself, Dr. Nofzinger notes that we can change the way we consume it to positively impact our sleeping habits. For one thing, we can certainly stop watching the news or “doomscrolling” through Twitter late at night; as noted in a report by the National Sleep Foundation, pre-bed exposure to the blue light emitted by our electronic devices can suppress the release of melatonin, making it harder for us to fall asleep and delaying the onset of or compromising our REM sleep. These issues can add up over time and create a chronic sleep deficiency.

To avoid this, Dr. Nofzinger recommends turning off electronics an hour before bedtime to avoid a poorly timed influx of anxiety. While it may feel stressful to tune out for a bit, remember that it’s way more stressful to be plugged in 24/7 without a break from the news. We all need time to decompress, especially before bed. “If you can try to minimize exposure to stressful events right as you’re going to sleep, that’s going to be the best thing to do,” says Dr. Nofzinger.

Of course, that’s not always doable, as with occasions like Tuesday’s debate that go late into the night. If you can deal with catching up on the events the next morning rather than watching live, the trade-off might be worth getting a good night’s sleep. But if you’re determined to watch in real time, don’t go right to bed afterward with your mind still reeling. Instead, consider engaging in a relaxing or feel-good activity that you can zone out to, as the period right before bed is the time when “a healthy sleeper should be turning their mind off,” per Dr. Nofzinger. For Brillhart and Spiegel, putting on a lighthearted TV episode or movie does the trick; “watching Friends normally helps take my focus off of the chaos in my head,” says Spiegel. For Tsvayg, it’s meditation and breath exercises. For me, it’s reading, the pages of a book acting as a soothing distraction from the real world.

If you’re still lying awake at night despite these practices, though, it might be time to invest in a sleep-enhancing product. One natural option is melatonin, a commonly used hormonal supplement that, when taken before bed, can help you fall and stay asleep because of how it helps regulate your internal sleep-wake system. (Just keep in mind that although melatonin is considered safe for short-term use, there isn’t much info currently on its long-term effects.) You can also look into purchasing items like a sound machine or a diffuser, both of which Semigran says she swears by, to create a more relaxing environment; Dr. Nofzinger also notes that his company, Ebb Therapeutics, offers a headband device called the CoolDrift Versa that uses technology to cool users’ foreheads, thus reducing activity in the frontal cortex and helping them “drift into a deeper, more natural sleep more quickly.” 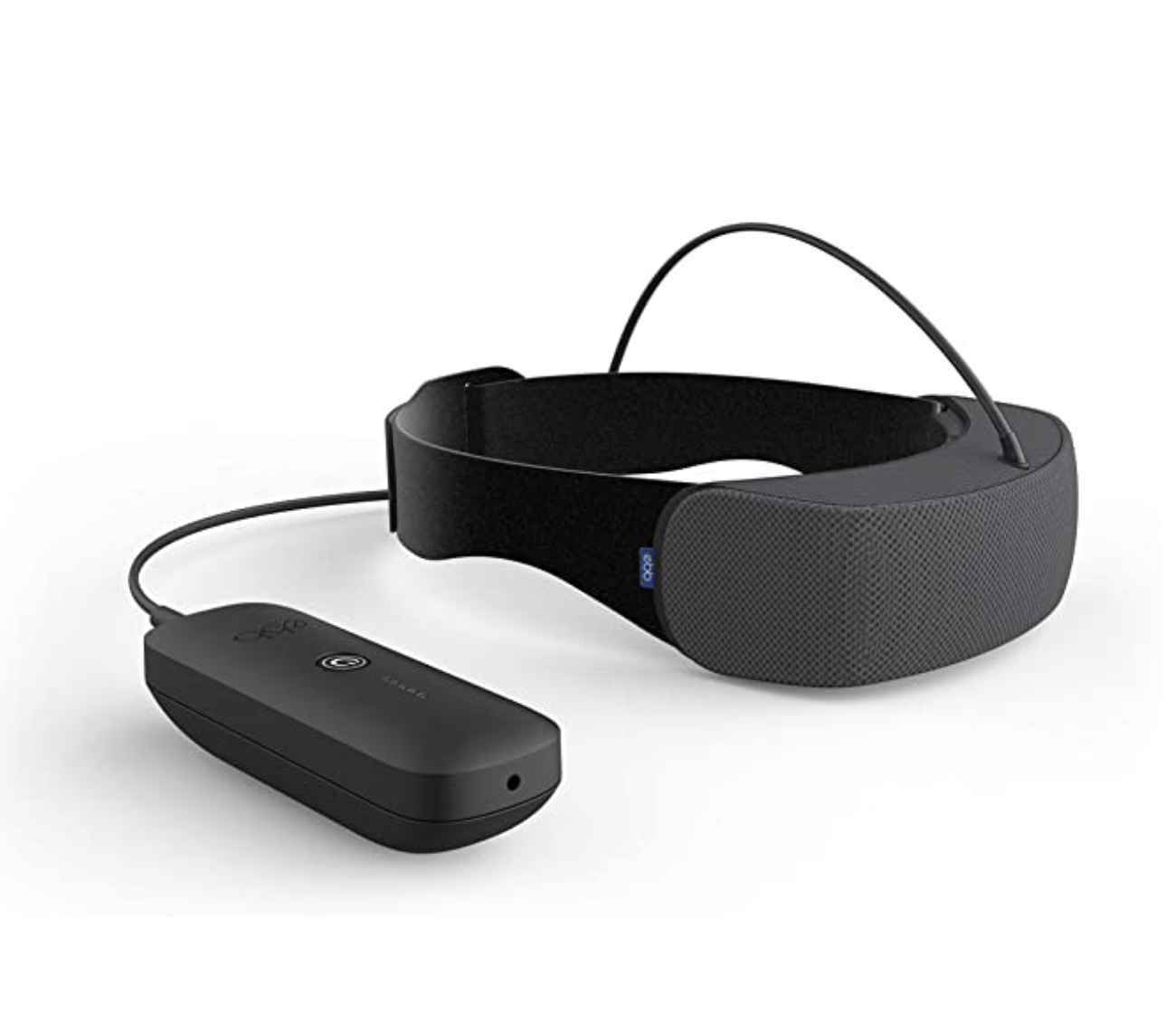 Whichever method you choose, the most important thing is that you understand the importance of putting your mental health first and the news second. No matter what happens on November 3rd, the world’s issues won’t suddenly disappear—so if we all want to avoid experiencing permanent insomnia, we need to work on calming our anxiety and clearing our minds pre-bedtime as much as possible. That doesn’t mean tuning out completely; if you want to stay informed, stay informed! But it does mean finding some form of balance, whether that’s by reducing the amount of time you spend online, adding a relaxation practice in before bed, or even choosing to spend an entire day not talking once about politics.

And if Trump wins the election and your stress gets worse? Don’t try to push it away. Part of healing and reducing your sleep-damaging anxiety, in the long run, is first letting yourself feel as angry and scared as you need to. “Allow it to come to the surface, process the emotions, talk about them with different people,” says Dr. Nofzinger. “And eventually, hopefully, there will come a time when a new reality sets in.”