Here’s the bad news: As with all social media and applications on our phones, some of us get so wrapped up in these dating apps that we’re missing the chance for real-life connection and relationships—not to mention, we’re potentially messing with our mental health and pushing off our other priorities. 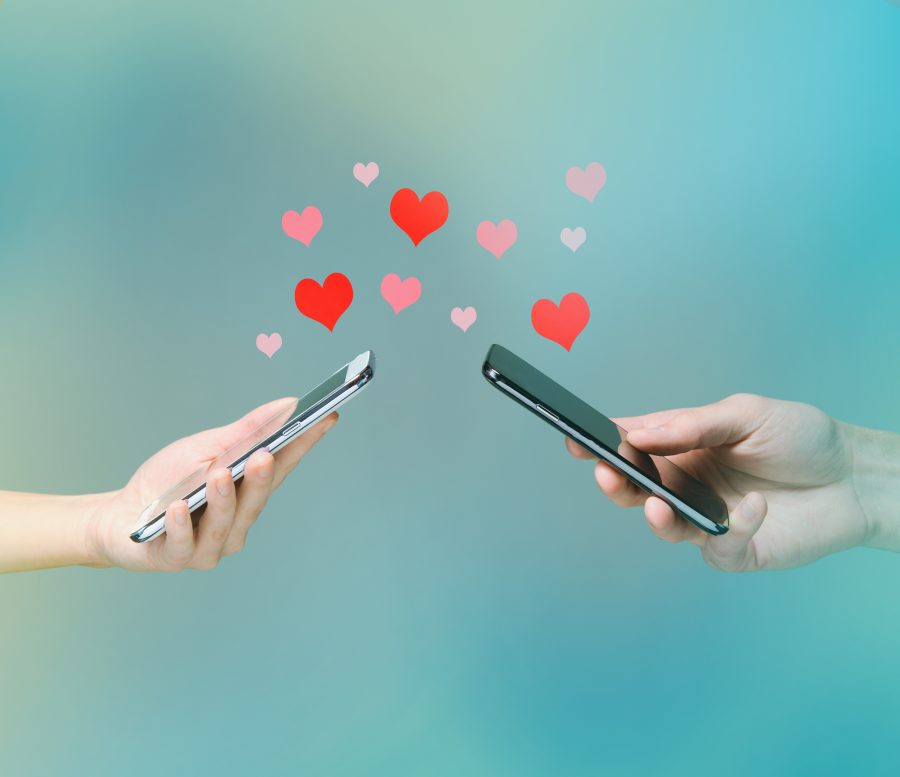 1You use multiple apps at once.

Does the following scenario sound familiar?

You’ve been swiping on Hinge for some time now, and you feel like every other profile is a white dude in khaki pants. Your matches’ conversations are boring you and the guy you met for a drink this week was easily forgettable. Instead of taking a break from Hinge, you decide it’s time to try Tinder. After all, you’ve seen from your friend that the people on there tend to be more “edgy” and less Stepford-y.

I’m going to let you in on a little secret theory I have: There really aren’t “better” people on one app vs. another. If anything, certain apps just have fewer options for you to choose from. But if you’re on Bumble, Coffee Meets Bagel, and JDate, there’s a good chance “Daniel from Hoboken” is too.

“Having more than three apps on your phone simultaneously is a sign of dating app obsession,” said Damona Hofman, Host of the Dates & Mates Podcast. “If you don’t get the matches you want from one dating app, you chase the high on another app and another app.”

You might also be spending more time than you realize keeping up with all these apps.

Courtney, 30, said she didn’t realize how reliant on dating apps she was until she started seeing someone exclusively and deleted all of her apps:

“I now have all this extra time and part of me is still like, ‘Oh! Check Bumble!’ But, it’s not there anymore, which is a good thing. I could probably write another book in the extra time I have from not compulsively checking and messaging on dating apps.”

2You find the apps more interesting than going on actual dates.

We all have that one friend who enjoys the attention (or the excitement) they get from dating apps more than they enjoy actually going out and meeting new people from the app. I’ve had friends with hundreds of Tinder matches that have gone on zero Tinder dates.

“If you find that you’d rather check into your app than sit through a date itself, it might be an indication that you could benefit from setting limits on your dating app use,” said Dr. Jess, PhD., host of the @SexWithDrJess Podcast.

3You turn to the apps even where there are opportunities to meet people IRL.

On the opposite end of the friend-who-uses-Tinder-for-an-ego-boost spectrum, I had one friend in college who would go to the club with us, and within an hour, have plans to leave the club and meet up with some guy she matched with on Tinder.

While it’s understandable that Tinder-ing your next booty call may be easier than dealing with—gasp—real life conversation, this could be wreaking havoc on your dating life.

“If you [crave] easy connections and sex without commitment, the idea of building a relationship starts to feel like too much work, and it can push you further from desiring or finding a relationship,” explained Hoffman.

Of course, there’s nothing wrong with being in a phase of your life where you’re only interested in casual sex, but everything should be in moderation—which means it might be nice to put your phone down if you’re in a real-life situation in which there are hundreds of single people that are likely looking for a hook-up.

Hello? A nightclub is basically real-life Tinder. If you hate clubs and going out, it’s understandable why apps might feel necessary for you. But, if you’re already at the club, why not see if there are any non-catfish cuties within arm’s reach?

4You delete and reinstall your dating app(s) constantly.

Any time anyone tells me they’re deleting their dating app(s), I roll my eyes. It reminds me of when my college roommate would wail about how she’s “going to quit drinking” from her bedroom every Sunday morning after a rough night.

Do you know anyone who openly loves dating apps? Maybe if you catch them in their first week ever using an app after a six-year relationship, or if they just discovered Seeking Arrangement and suddenly own 18 Gucci bags, but those are anomalies.

“If you dread the thought of using a dating app but still can’t stop yourself from mindlessly swiping, you might have an addiction to the adrenaline you get with each match,” warned Hoffman.

But if you think it goes beyond craving the adrenaline, you might just be earnestly looking for love and are unsure of where else to search.

“I want to delete [my dating apps] every day,” said Michelle. “I just deleted Tinder for the millionth time today.”

When I asked Michelle what goes through her head when she re-installs her app(s), she explained to me that she doesn’t know how else she’s supposed to meet someone.

“I don’t drink, I don’t like guys that talk to me at bars, I’m not going to meet someone at the gym. If someone approached me [while] boxing, I’d probably hit them,” she said. “Every time I delete [my dating apps], I’m usually feeling like  I don’t need anyone. And then when I re-download [them], I’m usually feeling vulnerable and kind of doomed to be alone. I’m turning 28 soon and starting to get, ‘you have to find someone soon’ vibes.”

Emm, 27, said the same thing when I spoke to her about why she can’t seem to quit dating apps:

“As a person who doesn’t hang out in bars, has had periods [where I was] completely sober, and who’s not naturally social, I find it hard to meet guys any other way. That’s probably why I come back to the apps so often.”

5You turn back to the apps at the slightest sense of boredom or rejection.

If you check back into The League at the first sign of conflict with your significant other, it’s not a great sign (or a great coping mechanism).

“I often delete the app once I’ve started dating someone but will go back as soon as I find them a bit boring,” said Emm. “Even if I don’t want anything or am ‘tired’ of physically dating someone, I’ll just scroll through.”

It may be easy to numb the pain of your boo not texting you back with a few compliments from random matches on OkCupid, but that’s probably not great behavior for a strong relationship (with a partner or with yourself).

If you read through this list and were like, “check, check, only sometimes, check,” that’s okay — you’re definitely not alone. We all want to find love (or at least some lust), and it’s normal to spend too much time actively searching for it when apps have made it so easy to do just that.

Unfortunately, your dating app obsession may be preventing you from finding the relationship (or really good friend-with-benefits) you’re hoping for. So here are some tips for curbing your Tinder habit:

“If you’ve grown accustomed to checking your messages right away or all day long, break this habit a little bit at a time,” Dr. Jess suggested. “For example, if you check your messages before you even get out of bed in the morning, leave your phone in the kitchen. Try to go through your entire morning routine (e.g. washing your face, brushing your teeth, grooming) before you check in on your dating apps.”

I don’t use dating apps, and I still find this tip super helpful. I leave my phone on airplane mode all night, and don’t turn airplane mode off until 20-30 minutes after I’ve woken up.

I asked Damona if she ever recommends dating app detoxes to her clients, because I’ve basically put myself on one for the last three years.

While she said she’s recommended these to clients in the past, a “dating app diet” might be enough for some.

“Instead of toggling between two or three dating apps multiple times a day just to see if anyone new has popped up, remove all the apps but one, and give yourself a month to focus on it,” she suggested. “Change your profile and change your behaviors, then your attitude toward the app could begin to change as well.”

Emm tried taking four months off of the apps and was happy she did.

“I always appreciated that apps gave me some confidence…but I wanted to see how I would feel without the validation, and to be honest, it was just fine,” she said. “Not having the app also makes me notice or look out for more real life flirty interactions.”

Which brings me to my next and last tip…

If you feel like “meet-cutes” don’t happen in real life, you might not be opening yourself up to them. Try leaving your phone in your pocket when you walk down the street or take the subway. Unplug your headphones. Think about something that’s going great in your life and crack a little smirk while you wait in line at Trader Joe’s. Scan the room when you walk into the party to see if there are any people you find attractive and want to make eye contact with. Wear something unique so that people who might want to approach you have an easy thing to comment on.

At the end of the day, being a little too obsessed with dating apps is nothing to be ashamed of—we’re truly all out here trying to fill up our little pyramid of Maslow’s Hierarchy of Needs.

But, if you read this list and felt personally attacked, I recommend taking some time to reconsider why you rely on dating apps so much. It might be because you feel like you’re truly ready for a relationship and want to meet “your person” ASAP—but there are a slew of other reasons that might not be as romantic or as healthy. And you might just be like me and realize that dating apps don’t work for you personally, and you’re better off posting up on the street with a cardboard sign that has your phone number on it.

Or, you know, just try some of my above tips before you try anything drastic.