Have you ever watched a movie that you loved as a kid but found yourself doing a double-take? Some of those films snuck in references that went over our heads at the time, but now as adults, we see them for what they are: sex jokes and innuendos. It might ruin the way you see your favorite childhood movies, but it’s funny to look back on. Here are some of those references that totally make more sense now that we’re older.
Mrs. Doubtfire
“Sink the sub. Hide the weasel. Park the porpoise. A bit of the old Humpty Dumpty, Little Jack Horny, the Horizontal Mambo, hmm? The Bone Dancer, Rumpleforeskin, Baloney Bop, a bit of the old Cunning Linguistics?”
“Mrs. Doubtfire, please.”
“Oh dear, I’m sorry, am I being a little graphic? Sorry. Well, I hope you’re up for a little competition. She’s got a power tool in the bedroom, dear. It’s her own personal jackhammer. She could break sidewalk with that thing. She uses it and the lights dim, it’s like a prison movie. Amazed she hasn’t chipped her teeth… I hope you bring cocktail sauce. She’s got the crabs dear and I don’t mean Dungeness.”

There’s a lot going on here, and all of it went clear over our heads as kids. But even though we had no idea what he was really saying, we still laughed, because hearing Robin Williams say words like “Rumpleforeskin” and “cunning linguistics” are still onomatopoetic and funny, even if the meaning is lost.

Who Framed Roger Rabbit
“Roger, darling, I want you to know I love you. I’ve loved you more than any woman’s ever loved a rabbit.” 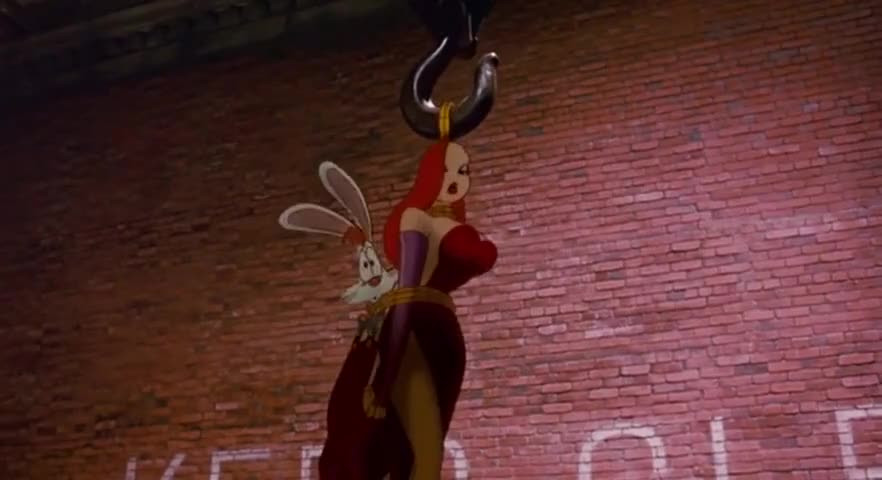 There’s a lot of innuendo going on in this movie, but this line sticks out in particular. Was Jessica talking about rabbits the animals, or rabbits that some women keep, um, stashed in their nightstands?

Clueless
“Ms. Stoeger, my plastic surgeon doesn’t want me doing any activity where balls fly at my nose.”
“Well there goes your social life.”

Dionne with the sharp wit and quick response. Cher immediately knows what D means, and as kids, we laughed along with her, but we didn’t really understand why. But now it all makes sense!

Aladdin and the King of Thieves
“I thought the earth wasn’t supposed to move until the honeymoon.”

Okay, so the third Aladdin movie isn’t as memorable or quotable as the first. But wherever Robin Williams went, he was able to slip in a naughty reference or two. When he rejoined the franchise as the voice of the Genie, he definitely delivered a joke about newlywed sex.

The line has become one of the movie’s most memorable quotes, so we apologize if we’re about to ruin it for you. But a snozzberry is actually a penis, and the kids were licking, well… you get the idea.

Harold Ramis left behind a lot of treasures for us, and the word “epididymis” is one of them. We Googled it so you don’t have to, and let’s just say that it’s part of the male reproductive system.

It’s not what Buzz Lightyear says, but his reaction. Let’s just say that he really likes what he sees in Jessie.

This movie isn’t from our childhood, but in about 10 years, there will be a crop of kids saying “Oh!” about this scene. Because we know what foot size really alludes to.