Few elements communicate more about a movie character than the design of their costume. Details as seemingly small as a scuff in a character’s jeans, or a designer tag hanging from their jacket can say volumes about their class, gender, and personal identity. There are so many different life experiences that clothing can communicate, and it’s the power of these details that first attracted Serenity costume designer Danny Glicker towards the art form.

While Glicker has a good deal of movies under his belt, he is perhaps best known for his work on 2006’s Transamerica, for which he received a Costume Designer’s Guild Award for Excellence in Costume Design for a Contemporary Film, as well as his work on 2009’s Milk, which received an Oscar nomination for costume design.

This past year, Glicker has been hard at work piecing together the costumes for Serenity, a thriller centered around a fishing captain (played by Matthew McConaughey) whose private island life is toppled when he gets tracked down by his ex-wife (Anne Hathaway), who wants help escaping an abusive partner. The psychological drama all unfolds among a few core characters in a tight-knit tropical setting, which makes for a visually intense narrative.

We chatted with Glicker about the artistic process of costume design, the way a color story forms, and how the script for Serenity informed the clothing in the film. 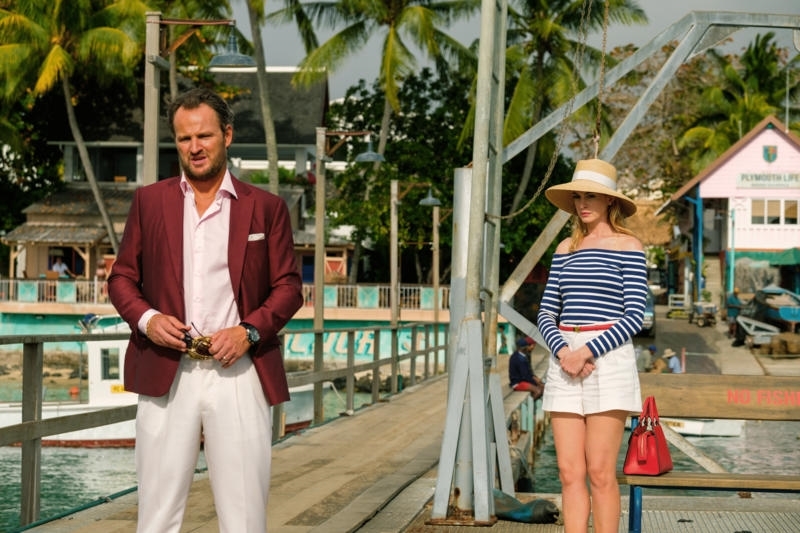 HelloGiggles: How did you first get into costume design?

Danny Glicker: When I was younger, I was working as a fabric shopper in my teens for Broadway shows. I always knew I wanted to be in the world of costume design. I really responded to the idea of clothes expressing the world of a character, and I loved the idea of clothes translating a character’s experience and perspective to a larger audience. I saw it as a transformative process, and I always knew I wanted to be part of that. So, it seemed like a natural progression when I started doing the actual designing. 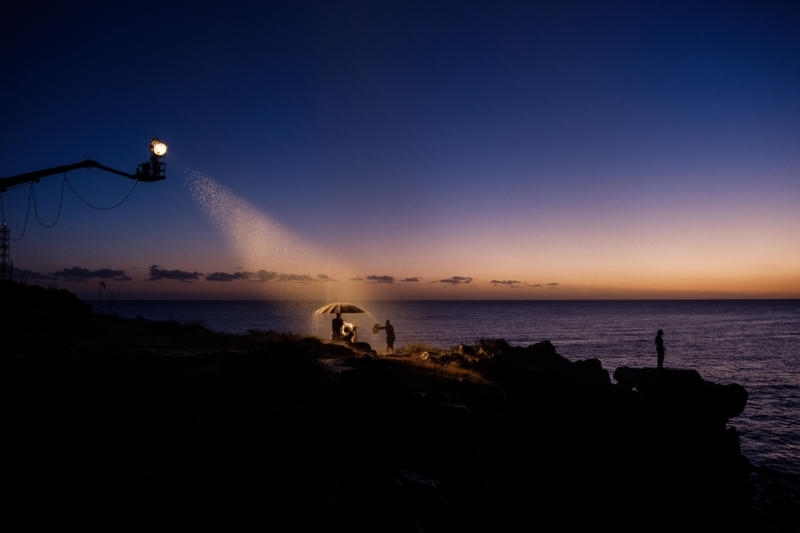 HG: What are some movies and television shows you saw early in life that exemplified the ways costume design can be transformative?

DG: I would see re-run of All in the Family as a kid, and I remember thinking about how the show was shot in one of the most glamorous parts of Hollywood, and yet, here these glamorous actors were wearing clothing in the service of expressing people who are modest and struggling. That was a touching experience for me to imagine, taking these glamorous people and turning them into relatable people. The way the costume design looked effortless, and yet was created through a very specific effort was really powerful to me. 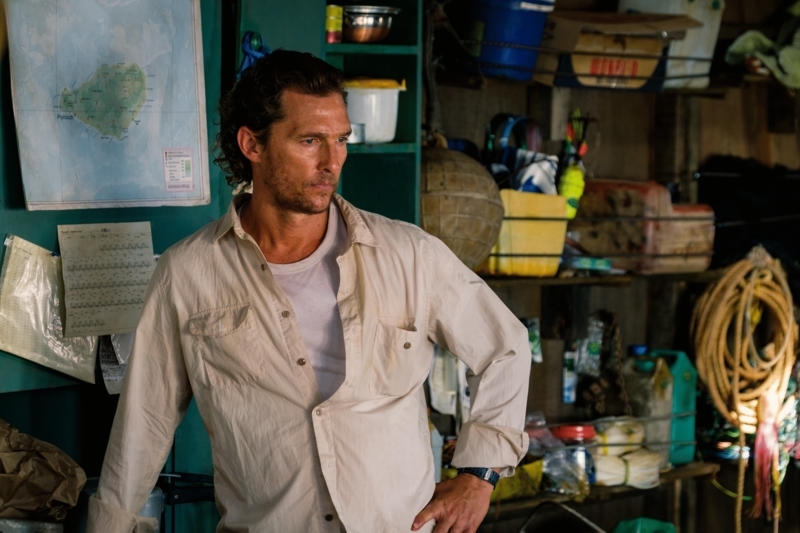 HG: When you read a script do you find yourself immediately visualizing characters and imagining the color story?

DG: Absolutely. Whenever I read a script, I have to experience it intuitively. You have to allow each character to express themselves so you can channel their voice. In that way, you get to experience each character when you’re breaking down a script. What you’re trying to do is bring their life’s voice to the visuals, and a lot of times the entire script begins to inform the overall aesthetic. There will be times when even though a story has many characters, you begin to realize that maybe these characters are seen through the perspective of one character. I think for me, whenever I read a script I start with an open mind and then go where the characters lead me. Once I understand the parameters of the script, I do my research and I build a world of information. Usually it’s thousands of pages of visual research and written research, the idea is to be really immersed in that world before building it.

HG: What came to your mind when you read the script for Serenity?

DG: Steven Knight wrote a really insightful and intelligent homage to the language of noir, and I think that was a very valuable and exciting point of entry. I remember reading it and thinking a lot about the language of noir, and going back to a lot of different movies of that noir, and in my conversations with Steven I said to him, “I think Serenity is a sunny noir.”  When we think of noir, we usually think of black and white and the darkness of humanity. I wanted to flip it on its head, because in many ways as a noir it’s really grounded in the traditions of noir. Instead of black, what if we pushed it to white? What if white became this incredible through line, and it began to represent all of these things. It could represent mystery, this blank slate; there could be something really sinister about it. 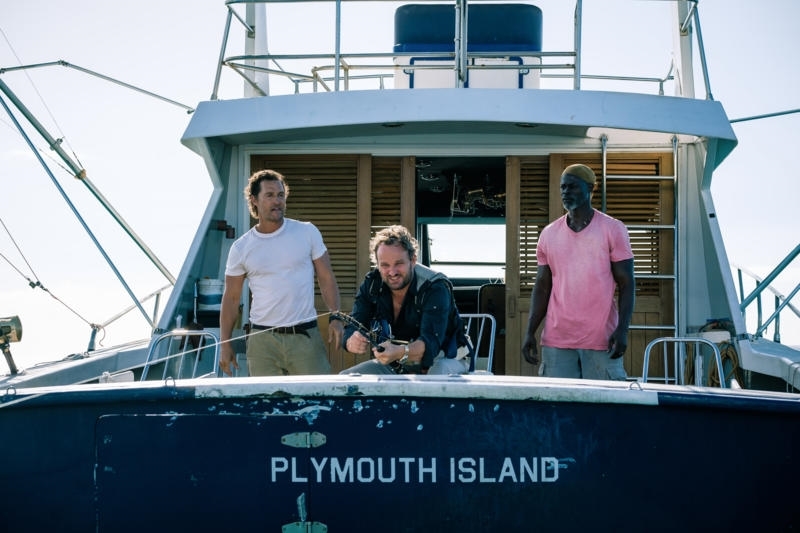 HG: How did the island setting and the ocean colors inspire your costume design? Did that setting influence the choice of the white?

DG: The fact that we were filming in this incredibly visually beautiful paradise location really helped. For the colors, there were earth tones which are always the base line, but in this case I really was pushing it to sandier, earthier tones for Matthew McConaughey’s character. Then you have the white, which speaks to this clean, tropical idea—it’s the white of this tropical paradise, then we see people arriving in resort wear, which is another white. Then there’s these richer water colors that you see on Diane Lane’s character, and they’re kind of representative of this ex-pat, Paul Gauguin painting vibe. It was fun because I knew the tropical setting, you’re dealing with blues and greens and sandy colors, and that setting would be a great backdrop to support a lot of colors. A big color story here was white; white can be a really mysterious foundation, and I really hope it works that way in the movie. 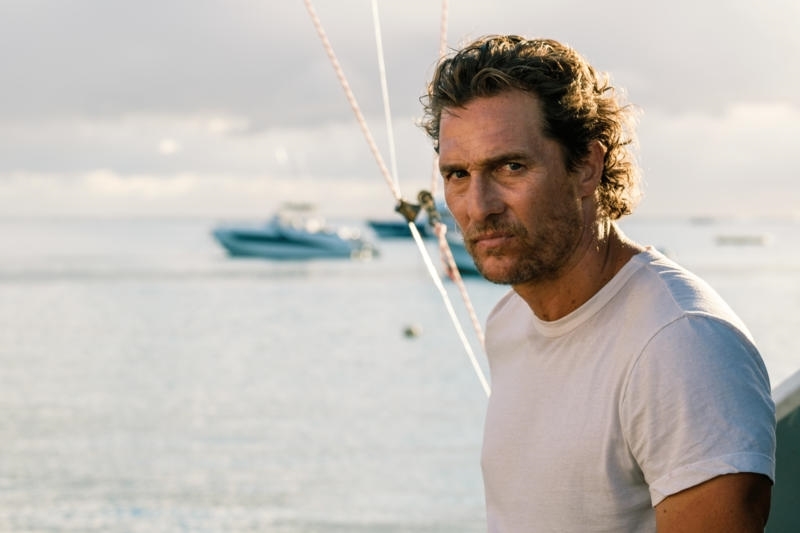 DG: And Hathaway’s husband is also wearing a very different white, it’s a white worn by someone who doesn’t have to get dirty, he knows he’s protected. When Hathaway first shows up, it feels like she’s a ghost, the white brings her from the past to the present and there’s also a question of her character’s purity. As in all noir, there’s a big question about the disconnect from a character’s presentation versus how they actually are. I think in the classic noir, the moment the leading lady appears is also a very important moment because there’s a question of what is she projecting versus how is she feeling. 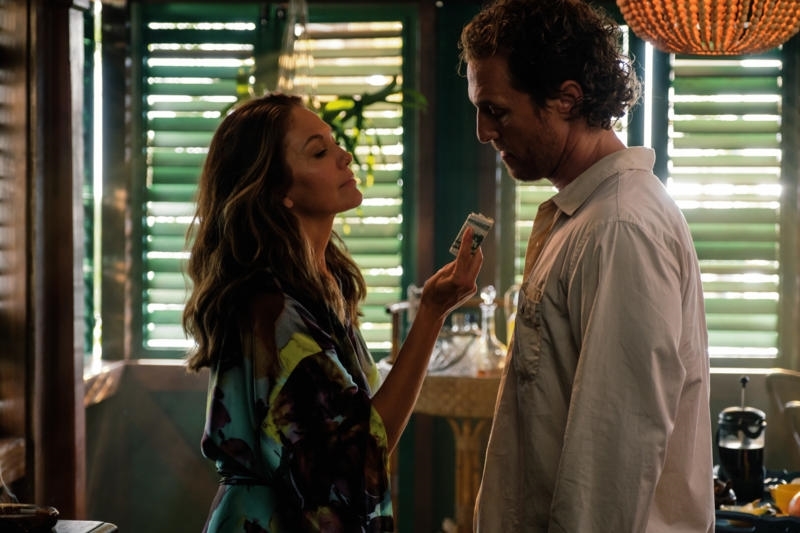 HG: Did you go on location before designing the costumes, and what was your process of getting the clothing itself?

DG: Most of our actors had their clothing designed and built in the States, and once that was finished we went to Mauritius, which is really beautiful and remote. But it’s not the kind of place you can just go and leave easily, and so we tried to get as much work done in the States as we could. So, I spent a lot of time here with the actors first, building the looks and the costumes before arriving on location. 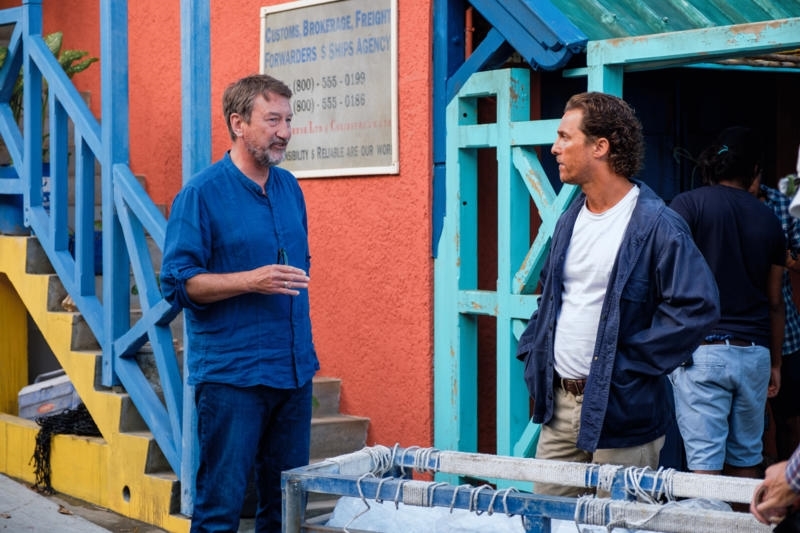 HG: Is it a collaborative process with the actors—do you consult each other about what their character will wear?

DG: It’s a very close collaboration, and I love it. We have to consider not only what the character needs to express or accomplish, but what the actor needs to feel in order to communicate that on camera. It’s really empowering when an actor discovers the next article of clothing that helps them realize the character on a deeper level, it’s really exciting. 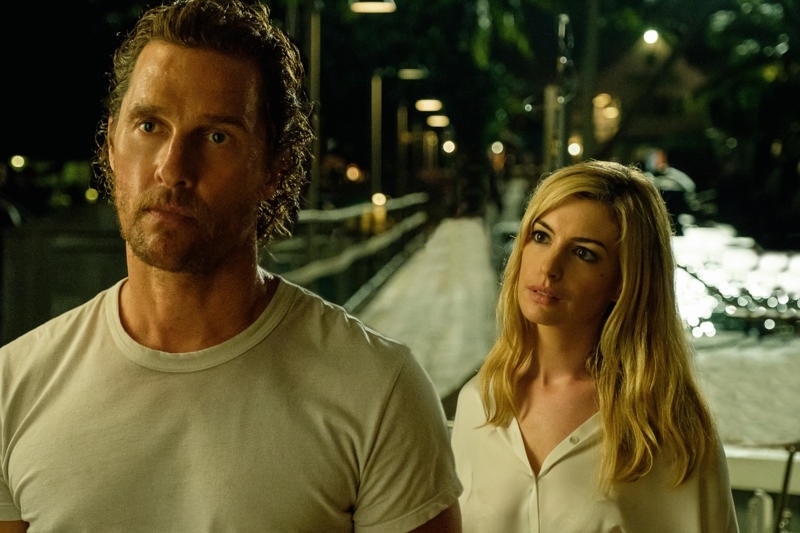 HG: Which character did you enjoy dressing the most or show style you would identify with?

DG: I can’t say there’s a style I personally identified with, but what I loved about dressing our main characters was none of the characters in this piece operate as a completely unattached entity, they all visually need each other to make sense and have context. So, what I loved about it, is the conversation in this piece that the characters are having visually, depended on what I was discovering with each actor. One of the things that’s revealed throughout the movie is the aesthetic foundation for the way the world exists. Getting information from my fittings with Matthew, I can then know how that plays with the character Jason Clarke would play for instance. What I think is interesting with Anne’s character, is there are many times in the movie when she presents herself opposite of how her character feels. 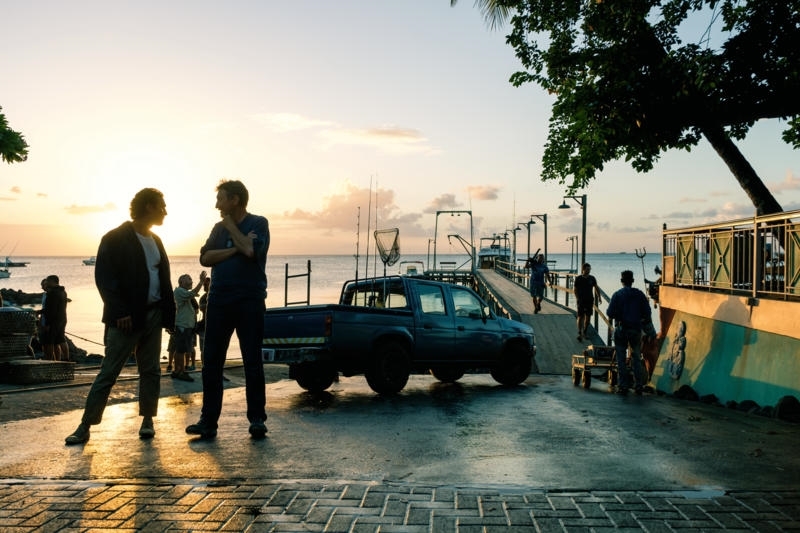 HG: How has your work on past movies given you the language and experience for Serenity? Has your process evolved or changed?

DG: It has definitely evolved, and I have worked with Matthew a few times. I love working with him. Every time I work with Matthew, it’s about his incredible dedication to the character. For me, when I worked on this it was about boiling down the aesthetic language, starting with noir, to really use Steven’s incredible script as a template to express this story. I think my experience helped, in that even though it was a glamorous environment, it was also challenging. It would be paradise if you were on vacation, but we were working. My experience helped a lot, because otherwise it would have been much more challenging doing this work on an island.

HG: You referenced film noir and I was curious if there were any specific noir movies you had in mind while designing Serenity? 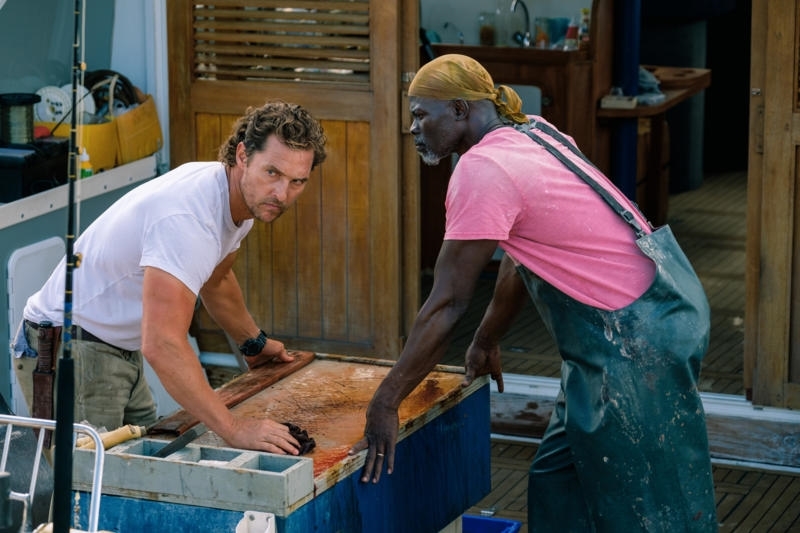