When Clarissa Explains It All was cancelled, we were devastated. Our tears quickly dried though when, a couple of years later, we found out Melissa Joan Hart would be making weekly appearances on our TV schedule as Sabrina in Sabrina the Teenage Witch. The show first premiered in 1996 on ABC as part of its TGIF lineup, and ran for seven seasons over two networks.

Now, twenty years later, the entire series is finally available on DVD as a complete set. Obviously, this calls for a immediate binge-watch sesh. However, there are still some unanswered questions the series left behind when it ended, most pressingly: 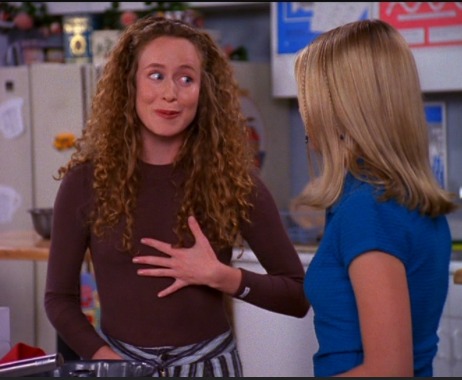 She appeared on the first season and then completely disappeared. Did Sabrina accidentally cast a spell on her and send her to the other realm? Did she freak out and run away over Sabrina’s secret identity?

Hart spoke to the Huff Post about that and other teen witch mysteries from the series. As far as Jenny, Hart said her “disappearance” was based on audience reaction and writer replacements.

“Season by season our show’s cast would come and go based on audience reaction, and sometimes there’d be dispute about contracts and negotiations as far as payment goes for certain actors. And just bringing in a fresh perspective from a different character. There’s a lot of politics that go on behind the scenes, like when a writer develops a certain character they get paid on the [likeness] of that character for every episode.”

She continued, “If a writer develops a character, but that writer’s gone and there’s bad blood, they might get rid of the character they developed, so they didn’t have to pay them anymore. There are a lot of things that go into that situation.”

We still like to think Hart’s character Sabrina accidentally cast a spell on Jenny. That explanation makes much more sense.

Other pressing questions were answered too, like, did Salem the cat ACTUALLY talk? The short answer is no.

And also: Who would win a magic duel, Sabrina, or Harry Potter?

Hart says Harry Potter, and we kinda have to agree. “There’s something to be said for experience and schooling, and he’s sort of the ultimate,” she told Huffington Post.