Toss everything you think you know about vampires—black velvet, pale faces, and dark lips—out the window. (Except for the dark lips—hold onto those.) At Rodarte’s Fall 2020 New York Fashion Week show, the modern lady vampire was born, and she’s our new style inspiration. While traditional vampires look dull, Rodarte vampires glow (thanks to the NARS tinted glow booster). And while typical vampires chill, Rodarte vampires charm. Welcome to the ethereal world of Rodarte’s Fall 2020 NYFW show, based off of Winona Ryder’s 1992 Dracula character. You might want to stay for a while.

On February 11th, Bella Hadid walked down the candlelit aisle of St. Bartholomew’s church in Midtown, Manhattan to open the Rodarte Fall 2020 NYFW show. Yes, a real church was the venue of this mythical-goth-meets-romantic-dreamer show. Hadid swapped her signature bob haircut for long, wavy extensions and a topknot embellished with a giant red rose and delicate white veil. 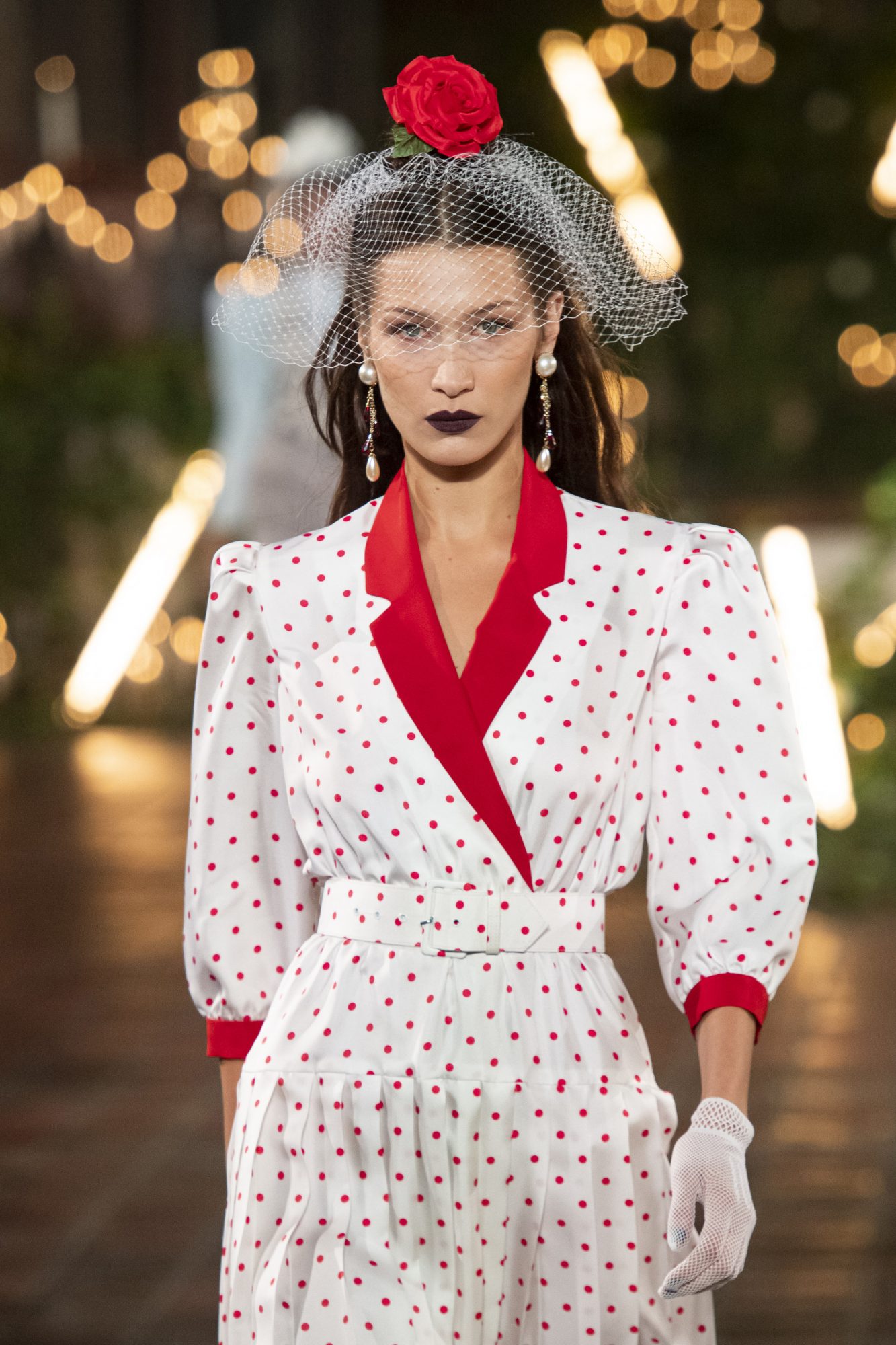 Hadid’s hairstyle was the trademark for the show—almost every model donned the same loose, “I woke up like this” style, topped with charming details like veils, flowers, or jewels.

"Based off the collection, we wanted the hair to look like a fairy tale, very ethereal," hairstylist Odile Gilbert tells HelloGiggles. "Like a young, cool girl who could be the wife of a vampire."

The dreamy hairstyle took a less-is-more approach, and the makeup and nails followed suit. Below, we’re breaking down the full beauty details from Rodarte’s show, plus how you can replicate the look at home. 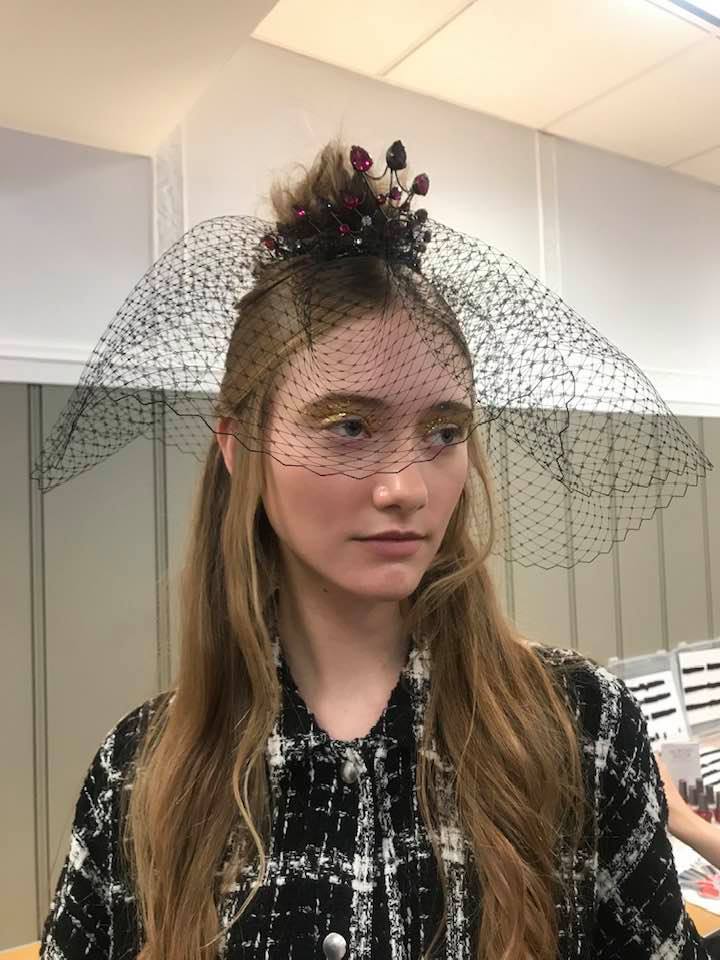 Based off of Winona Ryder’s look in Bram Stoker’s Dracula, every model was given a middle part and subtle wave using ghd Curve Classic Wave Wand. Most models’ hairstyles were completed with a top knot and tendrils hanging in front of their ears for a ’70s touch, according to hairstylist Odile Gilbert. The vision for the look was to make it seem effortless and subtle. Each model was given a different veil and extra accessories—fresh and fake flowers or tiaras, like above. Gilbert notes the careful consideration that went into each look, noting that they had decided the night before the show which veils each girl would wear.

To recreate this look at home, start by brushing your hair into a middle part with the ghd Oval Dressing Brush. Next, curl your hair in 3-inch sections with ghd Curve Classic Wave Wand for textured waves. Gather some hair at the crown of your head and place it into a slightly messy top knot. Then, tease more hair with the ghd Narrow Dressing Brush, and place over the top knot, and secure it with bobby pins. Finally, finish by spritzing the TRESemmé Volume Thickening Spray over your strands. 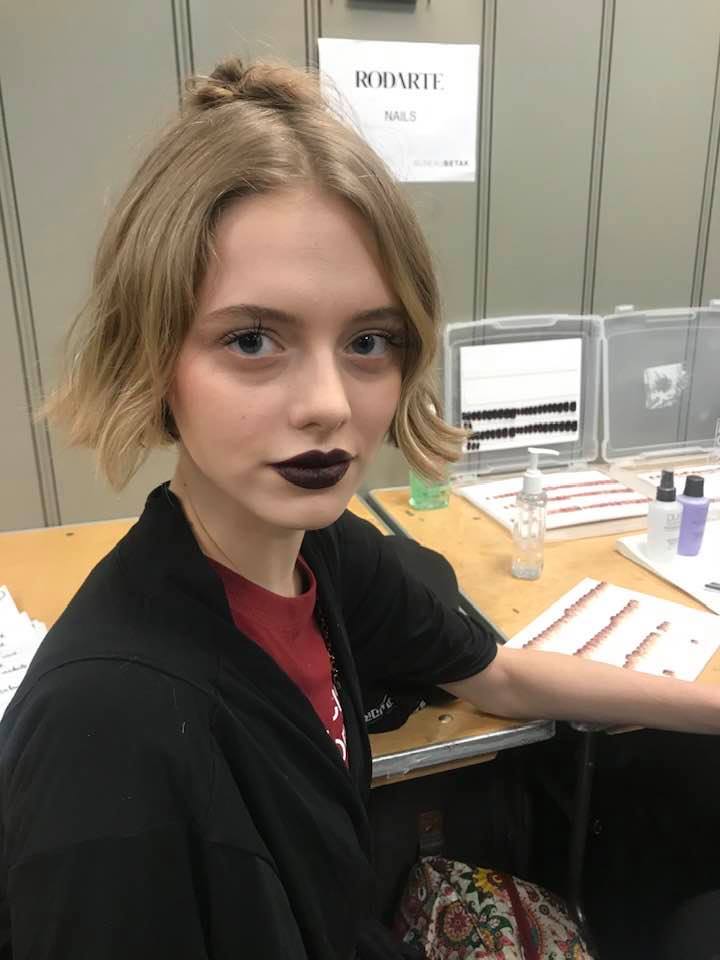 To recreate the persona of Winona Ryder’s Dracula character, Lead Makeup Artist James Kaliardos kept the look graphic and pure, with the intention to give each model a stark face. The star of the look was a super dark lip, which Kaliardos noted can turn makeup too theatrical if lots of other products are used alongside it.

"We wanted the girls to look luminous, but not too theatrical," Kaliardos tells HelloGiggles. "We wanted to concentrate on the lip being the statement."

To create this impactful lip, Kaliardos used the NARS Star Rockin’ Precision Lip Liner, Train Bleu Velvet Matte Lip Pencil, and Liv Audacious Lipstick. To cop the lip look at home, Kaliardos has some tips for you. Start by making a V in your Cupid’s bow with the lip liner and mark the bottom of your lips with a horizontal line. Then, make dots around the lips and (literally) connect the dots to ensure you create an even, balanced lip.

"With these pencils, the skin-to-lip texture is basically the same, so you're just getting this continuation of texture, but it's this really intense, amazing color," Kaliardos says.

Fill in with the NARS Liv Audacious Lipstick and you’re set. For the face, Kaliardos used NARS Radiant Creamy Concealer (“my favorite concealer in the whole wide world”), NARS Natural Radiant Longwear Foundation, and NARS Tinted Glow Booster to create a “catching the light glow.” He finished the face with either the NARS Tempted Blush or Orgasm X Blush to give a little hint of color to the stark look.

Finally, Kaliardos and Rodarte opted for dramatic lash extensions and natural brows that kept the look clean and glamorous without being too over the top. 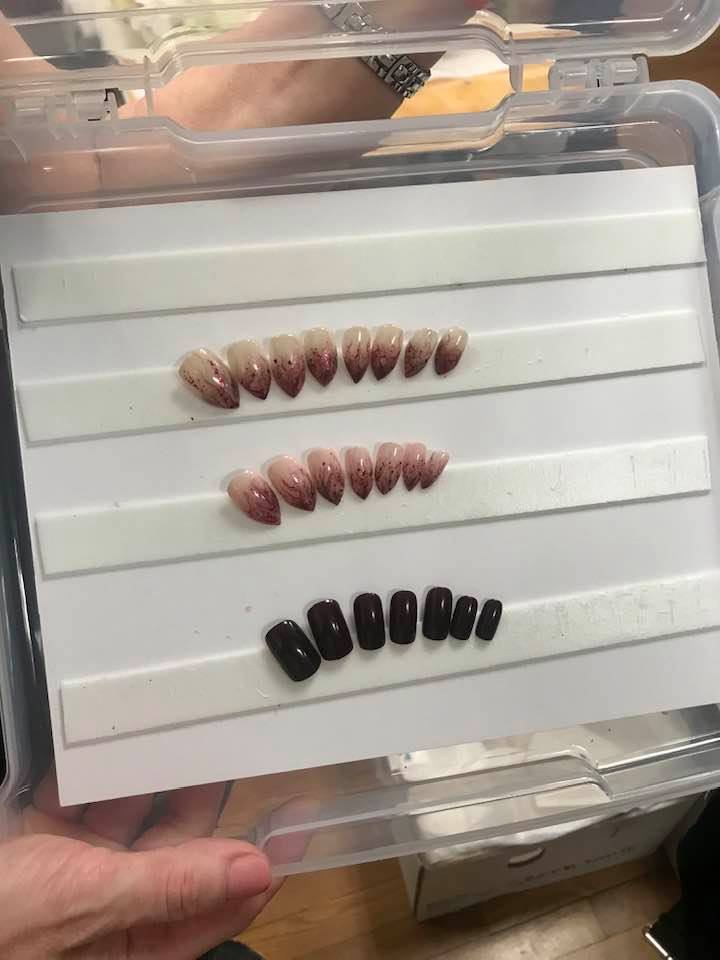 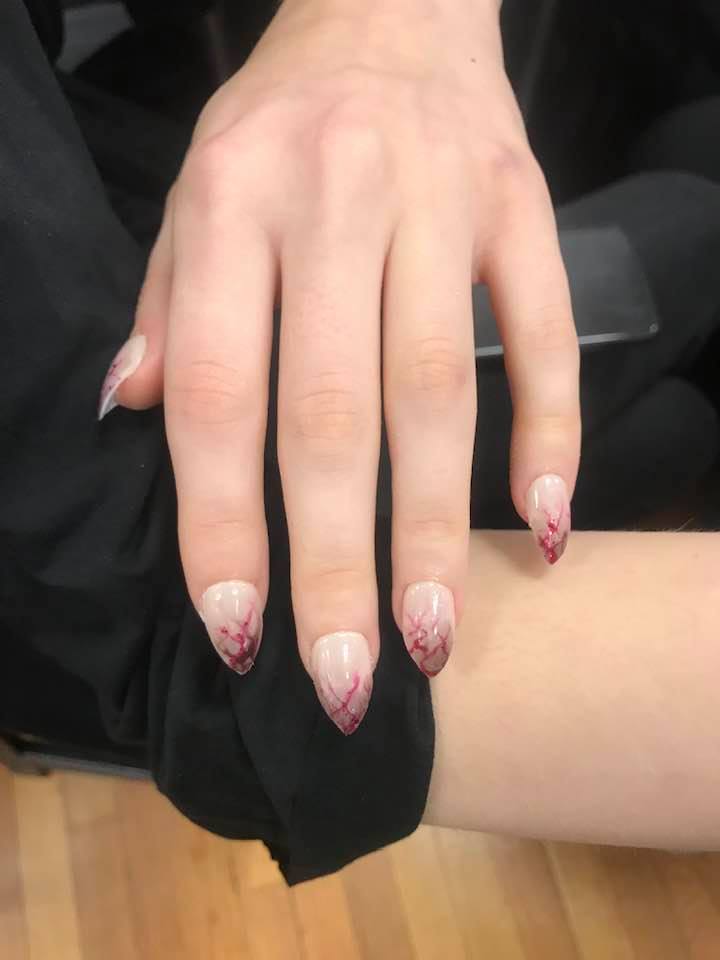 The nail look for the Rodarte Fall 2020 NYFW show kept in line with the balance between gothic and romantic influences. Morgan Taylor Lead Nail Artist Danielle Candido described choosing the stiletto shape for a clean impact with an abstract effect. All of the nail looks were done in gel polishes like Morgan Taylor’s In the Nude, Izzy Wizzy Let’s Get Busy, Man of the Moment, and Take the Lead.

"We wanted to marry both the vampire and innocence crossover in a way that made sense, and added a finishing touch to the look," Candido tells HelloGiggles.