Robert Downey Jr. wants to be Mark Zuckerberg’s assistant — but there’s a catch

Mark Zuckerberg is a busy guy. Not only is he the mastermind of Facebook and the father of a (totally adorable – and nerdy) baby girl, he’s also creating a virtual assistant.

Zuckerberg has been promoting the release of the assistant, which is apparently running his things like lights and air conditioning in his house at the prompting of simple voice commands. While it seems he’s still tinkering with the system, Zuckerberg is making progress – the only problem is that the virtual assistant only recognizes his voice, not his wife Priscilla’s. He’s joked that he’ll give her access once he’s done working on it, but we seriously feel for her and how frustrating it must be not to be able to control the air conditioning in her house.

The artificial intelligence system, named Jarvis (duh, after Iron Man’s own AI, Jarvis) is now apparently truly ready to COME ALIVE. That is, gain a voice, not go all Ultron and try to destroy the world. Zuckerberg posted to Facebook, asking followers who should voice his Jarvis, and TONS of people replied. One response, though, was certainly unexpected.

Robert Downey Jr. contributed to the discussion, saying he’d voice the AI machine “in a heartbeat…” and the inner fangirl in us was like YAS YAS YAS.

But wait…not so fast. RDJ will only voice it as long as Paul Bettany received the payment for the work. Since Bettany voices Jarvis (RIP, sorta) in the Marvel Studios films, that makes total sense.

...and then RDJ continued that then Bettany would have to donate the money to a charity of Benedict Cumberbatch’s choosing, because it’s the “right kind of STRANGE! 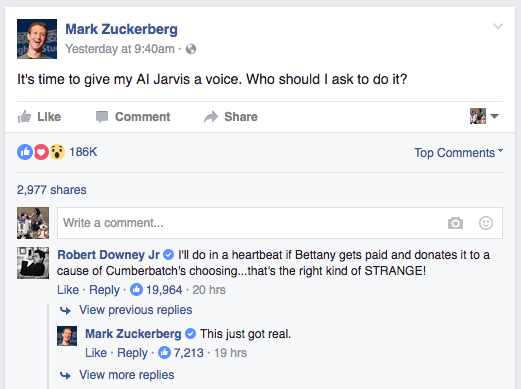 See what he did there? (Also, we’re sure Marvel appreciates RDJ doing his part to promote the upcoming release of Doctor Strange.)

The comment has garnered over 19,000 likes, and it’s no surprise: a virtual assistant voiced by Robert Downey Jr. himself would be pretty spectacular. Zuckerberg seems to think so, too: he responded to RDJ’s comment with “This just got real.” Hopefully, the pair can make it happen – especially if they follow through with all of Robert Downey Jr.’s requests regarding the fee, because that would be hilariously perfect.