At this point, we’re close to driving ourselves absolutely crazy with all the theories coming out of American Horror Story: Roanoke. What is real, what is fake, what the heck is up with Lady Gaga and her strange accent, WHY are Matt and Shelby still even living in the creepy ass Murde House…the list of questions goes on and on, and there’s some sort of speculative answer to all of them.

But there haven’t been many questions raised about Lee. She seems pretty cut and dry when it comes to her character and motivation: Everything is about her daughter. Oh, eh, and then Lee’s husband is murdered, and she’s the prime suspect and there’s mounting evidence that she’s actually the one who killed him…but you know what let’s save that for another day.

And push all of that aside for right now. There’s new evidence that’s just come to light about Lee, and it’ll blow your mind: She might actually be based on a real person.

YEAH. Go ahead and google, "Lee Miller + Roanoke." Right now. Do it. Look at what pops up: 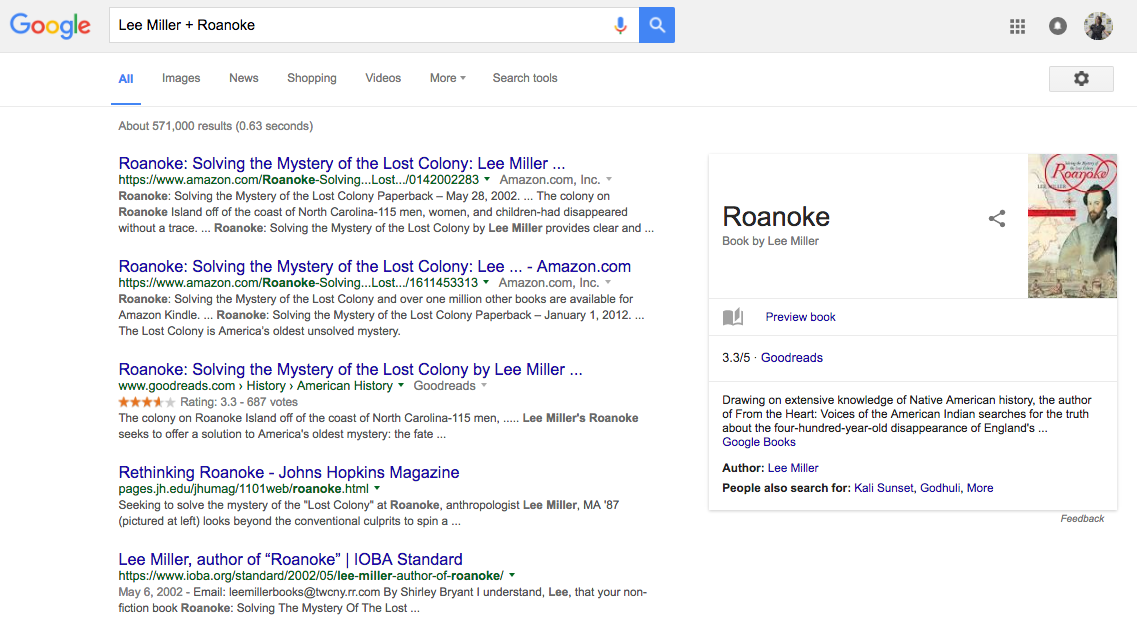 The nice people on Reddit first pointed this out (Thanks, creator111!) and this adds a whole new layer to the Roanoke mystery. It is entirely possibly that the Lee Miller we see on TV is loosely based off of Lee Miller who wrote, Roanoke: Solving the Mystery of the Lost Colony.

Remember, this season has carried with it the subtitle, "A true American Horror Story." This might be where the true part of it actually comes in!

The blurb for the book on Amazon reads:

“In this remarkable example of historical detective work, Lee Miller goes back to the original evidence and offers a fresh solution to the enduring legend. She establishes beyond doubt that the tragedy of the Lost Colony did not begin on the shores of Roanoke but within the walls of Westminster, in the inner circle of Queen Elizabeth’s government. As Miller detects, powerful men had reason to want Raleigh’s mission to fail. Furthermore, Miller shows what must have become of the settlers, left to face a hostile world that was itself suffering the upheavals of an alien invasion. Narrating a thrilling tale of court intrigue, spy rings, treachery, sabotage, Native American politics, and colonial power, Miller has finally shed light on a four-hundred-year-old unsolved mystery.”

While it doesn’t necessarily completely line up with what we’re seeing for Season 6, there’s nothing to stop AHS from taking this idea and running with it. And throwing in an odd woodland tree fairy played by Lady Gaga.

Is this a big clue that Lee will survive the Roanoke nightmare and then go off and write a book about it? We’ve seen AHS rip from the headlines before, and the history of Roanoke IS based on truth. It might even be based on Lee Miller’s book, too.