To say that our lady bits haven’t exactly been celebrated this election season would be a, uh, understatement. But don’t despair, Pussy Riot’s here! Unpack your bags, crumple up your roadmap to Canada (but keep that framed pic of Justin Trudeau) and take a minute to check out the video for Pussy Riot’s new ode to womanhood, “Straight Outta Vagina”.

The women of this Russian punk rock group are no strangers to controversy. In 2012, three of its members were famously jailed for a performance the group had staged in a Moscow Cathedral. Their lyrics often center around issues of feminism, LGBTQ rights, and criticism of Russian President Vladimir Putin.

The video for “Straight Outta Vagina,”released Tuesday, opens with Nadya Tolokonnikova, one of the group’s founders, wearing white robes and one of Pussy Riot’s signature balaclavas (a nod to their previous scandal). The clip also features women wearing price tags as jewelry and dancing in front of urinals. 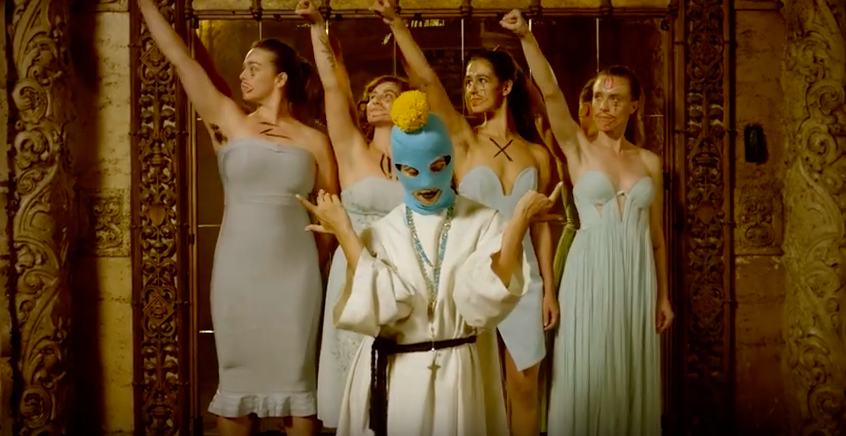 In an interview with The Guardian, Tolokonnikova said the song is about more than the current national nightmare election.

“This song could be considered an answer to Trump. But I believe the idea of powerful female sexuality is much bigger than any populist, megalomaniac man… Vagina is bigger than Trump.

(Brb, getting “Vagina is bigger than Trump” tattooed across my lower back).

Preach, Nadya. “Straight Outta Vagina” is the angry feminist anthem we need to get us through to November 8th. Watch the video here.